Khichan in Thar Desert plays host to huge flocks of demoiselle cranes arriving from Central Asia. This mesmerising spectacle is something to treasure for a lifetime.

The birds seem to have been waiting for you all morning. You have been advised to come here early in the morning for the congregation. But Khichan is in middle of nowhere and so justifiably you arrive here in the middle of the day. The action is supposed to happen in early mornings and evenings. You are not expecting a lot. Only recently, you have started to notice the birds around you. A month earlier, all across Gujarat, you have seen these beautiful large birds like pelicans, painted storks and demoiselle cranes feeding in the fields, poking in ponds and flying low over the waters of Rann. You are doing the Great Thar Road Trip and Khichan conveniently falls midway between Bikaner and Jaisalmer. Today you are on your way to see dancing camels in Jaisalmer Desert Festival. Khichan in Thar Desert plays host to huge flocks of Demoiselle Cranes arriving from Central Asia. You need to go investigate; dancing camels will have to wait.

A bus full of western tourists has just arrived in the village of Khichan, a few kilometres ahead of Phalodi. Like the other tourists you are also trying to figure out what next. The parking lot attendant advises you to climb the mound just ahead. The setting at Khichan seems to have been designed for full effect. As you crest the hillock, the spectacle unfolds before your disbelieving eyes in a shallow bowl like valley below. Surrounding a pond, there are thousands of Demoiselle Cranes. Yes you have seen packed penguin settlements and stampeding wildebeests on TV but never anything like this in front of your eyes. You don’t like to keep anyone waiting but here it seems you had entire colony of Demoiselle Cranes waiting for you.

Excitedly you clamber down to the water body. Most of the birds are on the other side of the pond. And the birds are all taking at the same time. So while in Kutch the mind goes silent listening to the emptiness of Rann doused in pink of a setting sun, here in Khichan, the mind goes quiet making sense of thousands of cranes trumpeting excitedly. There is constant motion and activity - wings flutter, beaks are dipped into water, some dance while some preen. A dog and some cows move through the ranks. In response, entire columns move in unison like ripples on a grey sea. The view is hypnotic – the spectacle of feathery grey, the constant high-pitched loud trumpeting and the beauty of the cranes.

The cranes are beautiful and graceful like the lasses they are named after. The name demoiselle is derived from the French word dameisele which means damsel or young girl. Everything about the cranes is beautiful, measured and graceful. They have long slender necks with white ear tufts. The fore-neck is dark while the light grey of neck extends to an attractive shiny bluish-grey plume. Bright red eyes are inquisitive as they strut like pretty damsels. 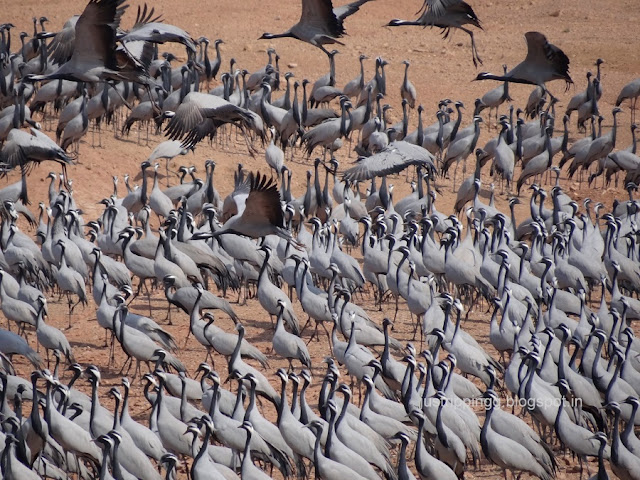 The chatter is changing pitch. There is some expectancy building up. Signals are transmitted through the congregation. Feathers start flapping. And then as if on cue, entire entourages of birds lift into the skies, like a soaring Mexican wave. The sight of thousands of birds taking off at once creates a fantastic show. It seems that thunder claps are rolling over the waters creating ripples. The sound and the spectacle are both dramatic and dazzling. The cranes circle over you even as more cranes take off. For few minutes it seems the feathers have obscured the sun that came out reluctantly from the foggy skies. All you can do is watch the sky spellbound. You cannot imagine your good fortune. First the cranes wait for you and then they treat you to this extravaganza in the skies. Apparently, after the feeding session of morning, the birds gather around the water bodies only to fly away in the afternoon. They will spend the night on the dunes standing on one leg and will return in the morning. 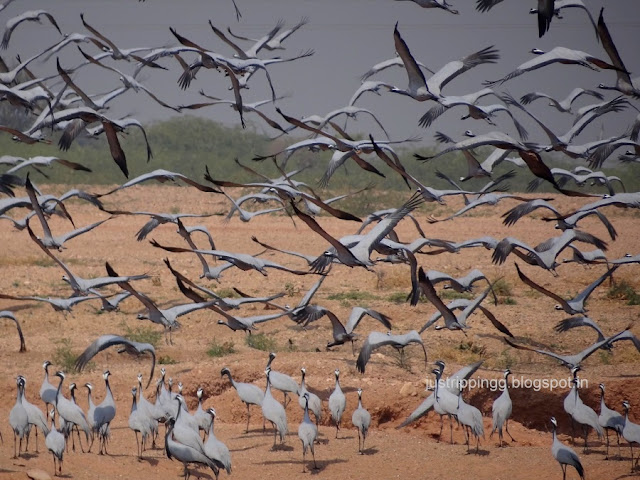 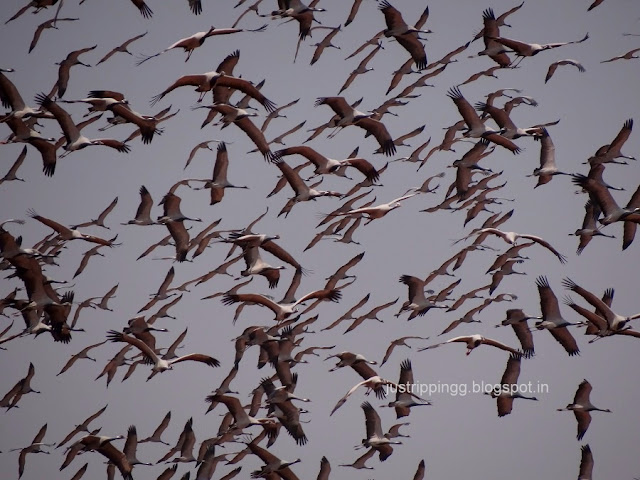 The story of how inhabitants of frozen steppes in Mongolia and Eurasia and beyond found a loving home in Thar Desert, thousands of miles away, goes back to the seventies when Ratanlal Maloo and his wife, residents of Kichna village, began feeding birds. Initially, few demoiselle cranes joined the pigeons and other local birds. Over the years, as stories of benevolent Ratanlal’s lavish feast started doing rounds of steppes, the number of cranes arriving in Kichna grew rapidly to thousands. The cranes – called Kurja locally - would start coming by August and leave in March. The cranes are fed in chugga-ghar or feeding-house where, during peak months, fifty bags of jowar weighing fifty kgs each are offered to the cranes daily.  The cost is borne by individuals, village panchayat and government agencies.

The deafening sound has receded. The pond is almost empty now. The cranes turn into tiny dots as they rise high into the stratosphere. The flying regime is probably followed on a daily basis designed to provide lessons to the young members and to keep everyone else fit for the impending long haul back home.


The few hours watching the cranes have been pure joy. It is actually a combination of God’s miracle and large heartedness of a small desert village that has provided these moments of bliss. Every year the birds travel thousands of miles, crossing the mighty Himalayas, fighting hunger, disease and predators to come to a village in India’s Thar Desert. The village residents welcome them, feed them and look after them for months while expecting nothing in return. It is as if God had intended all beings the freedom to move about a planet that belongs to everyone – a planet where no passports are needed and no boundaries exist. Just like the cranes, humans too could move across the world without restrictions and find love wherever they go. Now that would not need a miracle. It would be something that was always meant to be.


A version of the story appeared in the February 2017 issue of Rail Bandhu, the on-board magazine of Indian Railways

Getting There:
Khichan is four kms away from Phalodi while Phalodi is 400 kms from Jaipur and 170 kms from Jaisalmer in Rajasthan.
Traveller Tips:
Related Links:
The Smoking Statue of Jodhpur


Shekhawati - The Painted Wonderland
Posted by justrippingg at 07:24