Once upon a time the Indraprastha Park was a landfill. Delhi had not expanded as much and the garbage dump site was conveniently located on the periphery of the city. The stench in the air indicated that you were leaving for the once looked down upon Trans-Yamuna or ‘Jamna- paar’ colonies that lay across the Nizamuddin Bridge. The bridge then was still a single lane contraption that saw huge traffic jams on weekends as people took off for hill stations of Uttarakhand on the NH24. Now the same double bridge leads you to the hottest addresses of Jamna-paar Mayur Vihar, Indirapuram, Noida and beyond. Yes Delhi and the suburbs are changing at breakneck speed.

The landfill lay in a rectangular plot with the Ring Road on the east, recently come up Sarai Kale Khan ISBT on south, Nizamuddin Railway Station and Humayun Tomb on the west while Pragati Maidan was to the north.

Around the beginning of the millennium there was a proposal to convert the landfill into a green belt and shift the landfill eastwards to Ghazipur. After several listless years, finally the renamed Millennium Park has come into its own. The stench and methane emission is gone. The park inaugurated in 2003 is adorned with sculptures and a variety of trees and flowers. Though not as glorious as New Delhi’s parks, the park is putting up a good show as you take a walk in the first week of April.

During the Commonwealth Games of 2010, there was proposal to dig a tunnel under the park to connect East Delhi to Central Delhi. The tunnel road would have provided an easy access to Jawaharlal Nehru Stadium by connecting the Commonwealth Village just beyond off the Nizamuddin Bridge. The project was shelved and the ever expanding elevated Barapullah flyover to the south has taken the responsibility of bringing East and Central Delhi together. 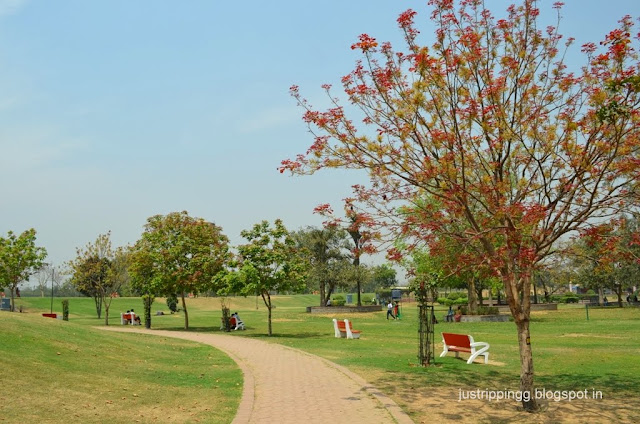 You walk on the rolling mounds, a feature probably taken from Nehru Park, as you are greeted by the domes of Humayan Tomb, Neela Gumbad and Gurudwara Damdama Sahib on the west beyond the bogies of resting railway rakes. Every bush and tree has snuggling love birds. After Nehru Park, Buddha Jayanti Park, and Lodhi Gardens, the love birds have another address to coochie-coo in. To the north are amphitheatre, food court and the serene Vishwa Shanti Stupa. An army of workers sweep the grass of the fallen leaves as a supervisor moves around on his motorcycle. The good work of upkeep is showing result.

Inside the park, the clamour of metro construction and tumult of the road seems to be far away. The birds, unseen, chirp away. Here as you walk on a garbage dump, mother nature seems to be saying that she will keep cleaning up after you but it is time we became a little responsible or like a mother, she would periodically admonish you. But like recalcitrant kids we never seem to heed. 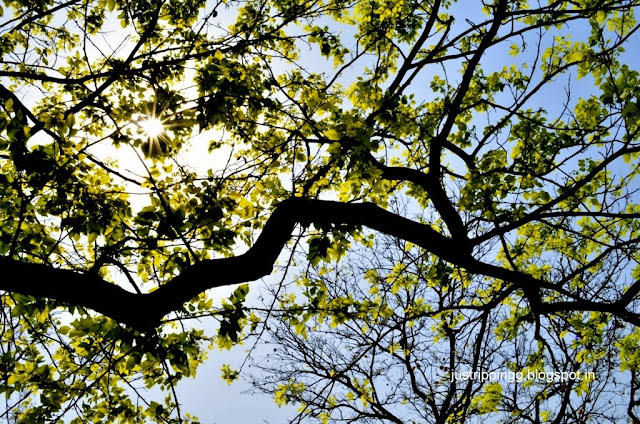 Trees are in different state of wondrous transformation. You are discovering this aspect of Delhi’s spring for the first time. Summers have set in early this year curtailing the short Spring but not before you have your fill of shimmering leaves of green and red hues.

Some more photos to enjoy: 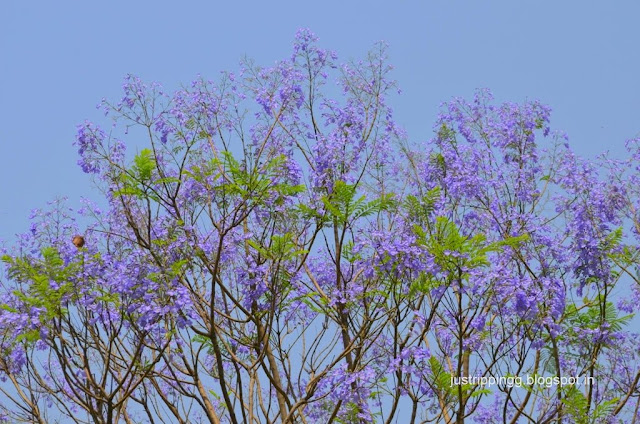 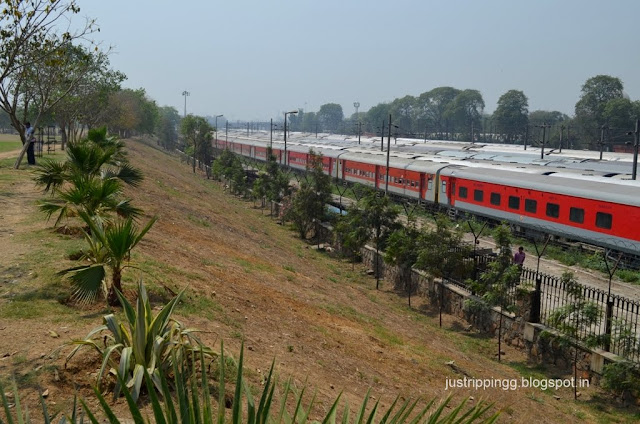 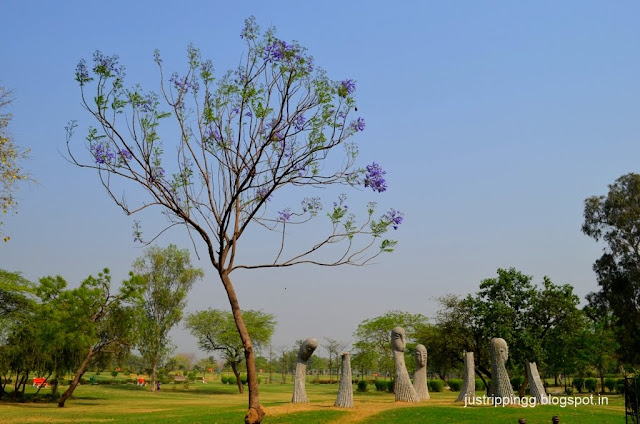 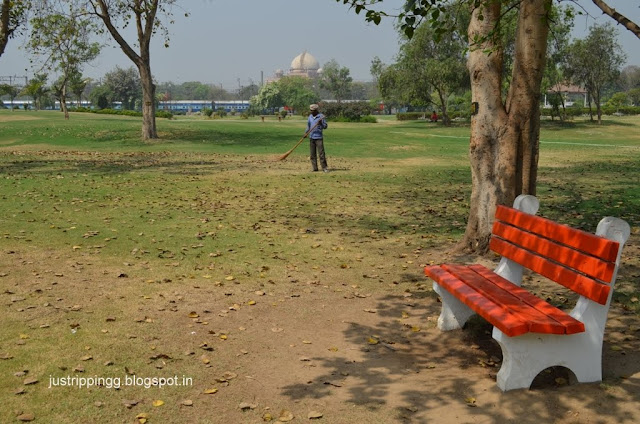 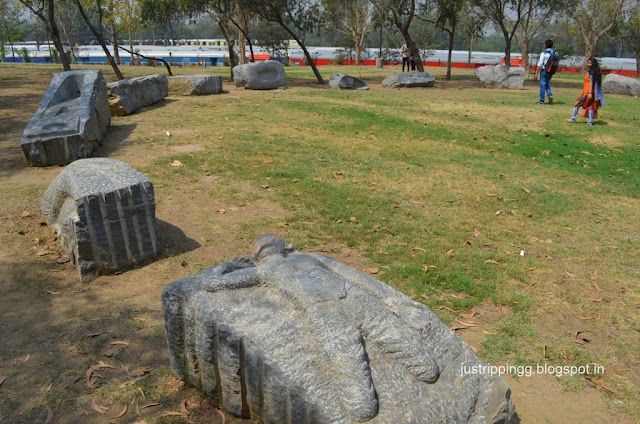 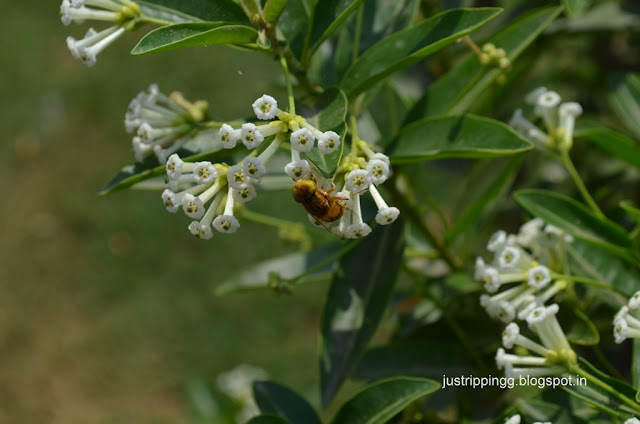 Related Links on this blog:

Love in the Times of Amaltas

Recommended Book - The wonderful 'Trees of Delhi' by Pradip Krishen
Posted by justrippingg at 06:55