Anandpur Sahib – The Haven of Bliss

A series of shimmering steel bridges set among green paddy fields and blue skies seem to be leading you straight to heaven. This is exactly what Guru Tegh Bahadur was seeking as he tried to create his own piece of solitude away from plotting masands and contentious relations. The Ninth Guru bought a hillock near the ancient ruins of Makhowal and built himself a village where he could spend his days in peace and hopefully named it Anandpur – the ‘Haven of Bliss.’ Anandpur Sahib in Punjab is about 90 kms north-west of the capital Chandigarh and close to Kiratpur, the ‘Haven of Refuge,’ founded by his father Guru Hargovind, the Sixth Guru. 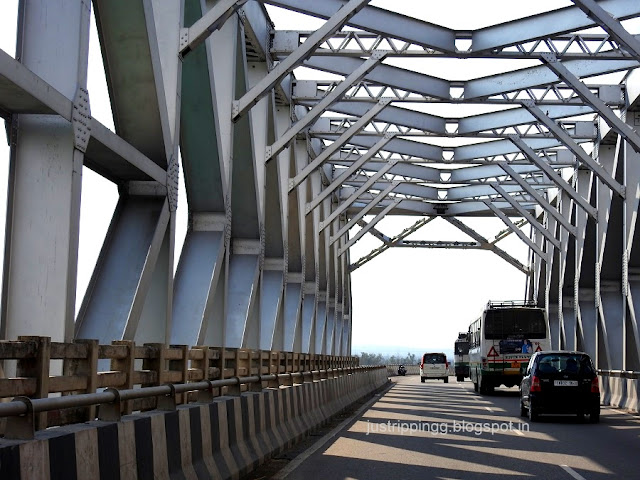 As you pass through the picturesque surroundings and into the gates of Anandpur Sahib a rejuvenating energy seems to infuse the mind and body. You drive into the pleasant town framed against the backdrop of Shivaliks as Sutlej flows quietly on the south-west and Naina Devi Temple beckons from top of the hill on the east. Just ahead, the biggest Khanda you have ever seen, glints under the blue skies. The Khanda, the Sikh Emblem, seemingly lights up the entire town as it towers over a water tank in the Panj Piaras Park.
Anandpur Sahib, the second most holy Sikh city after Amritsar is the birthplace of Khalsa Panth and is also the headquarters of the Nihang sect, the Beloved Army of Guru Gobind Singh. Nihangs or Daredevils attired in blue robes and lofty turbans and armed with array of weapons were always at the forefront of a battle. The town is also the residence of various members of Sodhi family. The prime residence is the 300 year old ‘Sodhiyan di Haveli’ in the old city. Seven of the ten Gurus were from Sodhi family, a Khatri sub-caste, beginning with Guru Ram Das, the Fourth Guru. 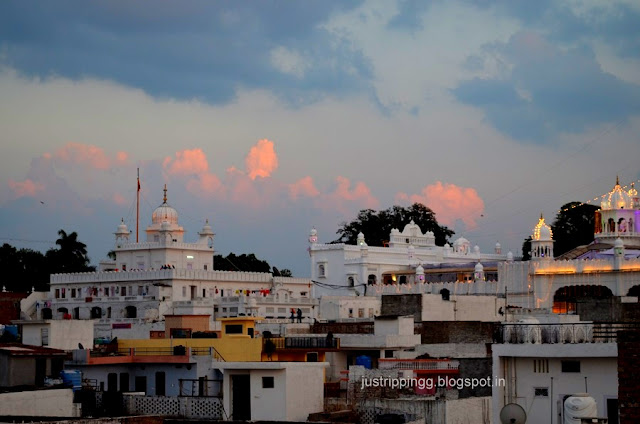 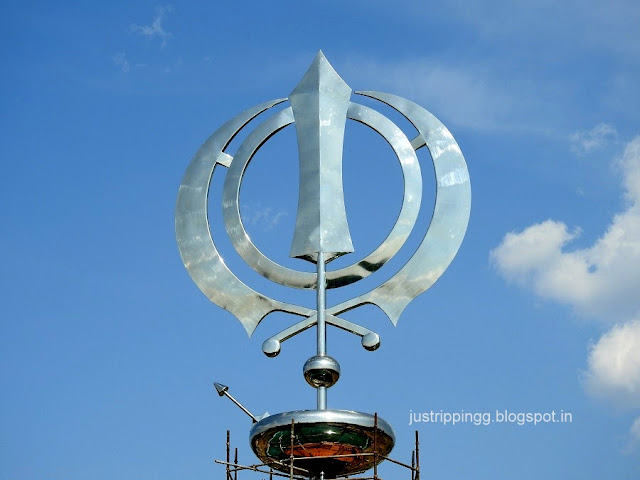 The Sodhis give a legendary account of Anandpur and its origin. On the site of Anandpur there lived a cruel demon called Makho who had occupied the place for 700 years before Tegh Bahadur came. Tegh Bahadur wanted to expel the demon but the demon promised to depart on his own accord. He just wanted one favour that his name be associated with the place where he had lived for so long. The Guru replied that the Sodhis would call the place Anandpur but the hillmen and others would call it Makhowal. 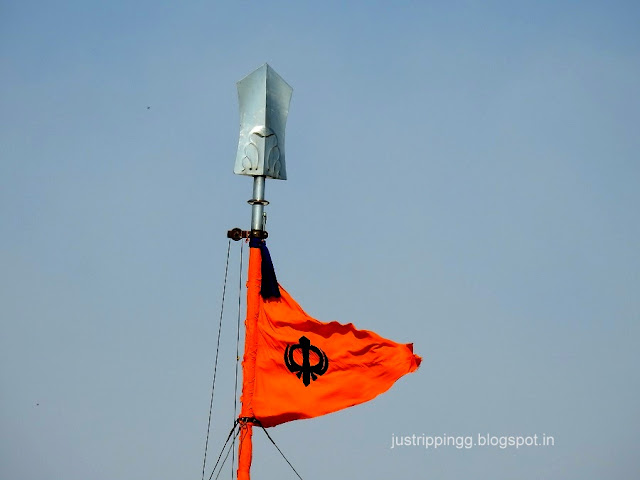 In the old city stands the Gurudwara Sis Ganj. It was here that a nine year old Gobind Rai cremated the severed head of his father Guru Tegh Bahadur. The gurudwara is the namesake of the gurudwara in Delhi’s Chandni Chowk where the Guru was executed in 1675 on the orders of Aurangzeb. The dignified looking gurudwara is a reminder of the Guru’s sacrifice to protect his people from the tyranny of an increasingly intolerant and persecuting government. Across the street is the Guru ka Mahal where Guru Tegh Bahadur used to live. There is an underground cell called ‘Bhora Sahib’ where he used to worship alone.
You are making your way to the much talked about Virasat-e-Khalsa Museum. The first sight of the museum is stunning enough to blow you away. Set amongst the traditional architecture of domed gurudwaras in the town, the futuristic looking building can leave the visitor awe-stuck by its design and layout. The museum designed like hands offering prayers has two complexes connected by a ceremonial bridge. Beyond the terraced reflecting series of pools is the five-petalled Flower Building depicting the Five Virtues of Sikh religion. Inside, the museum has galleries showcasing the rich culture and history of Sikhs.  The sandstone towers and reflective silver roofs add an extra dimension to the striking visual appeal of the complex. It is not easy to wrench yourself away from this incredible sight.
Guru Gobind Singh fortified Anandpur with five forts for protection from Mughals and other assorted hill tribes to the north. Next to the museum is the main fort of Anandgarh. Nothing survives from the original fort which was the stronghold of Guru Gobind Singh and where the army of Nihangs was garrisoned. Built on a hill is the Gurudwara Anandgarh with a deep well called Kuan Baoli. Standing atop here and looking at the city sprawled below you notice that all the houses and gurudwaras are painted white. You have seen Rajasthan cities sporting the same colour – Jodhpur is blue while Jaisalmer is yellow. Anandpur Sahib was painted white to celebrate the 350th anniversary of the founding of the city in 1665. The white swathe of the city surrounded by green expanses and bounded by Shivaliks in the distance provides delightful views. 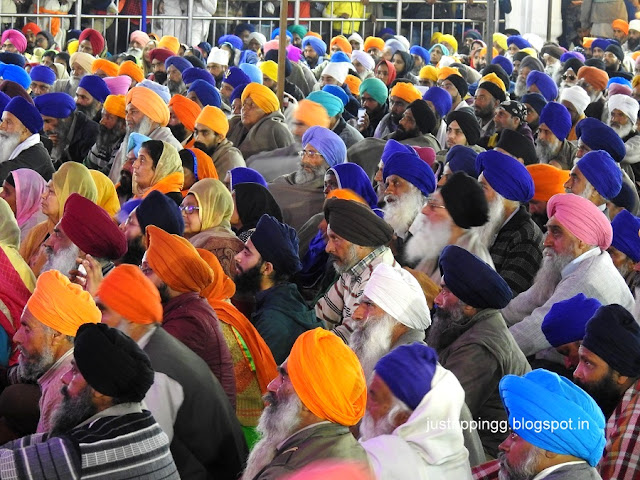 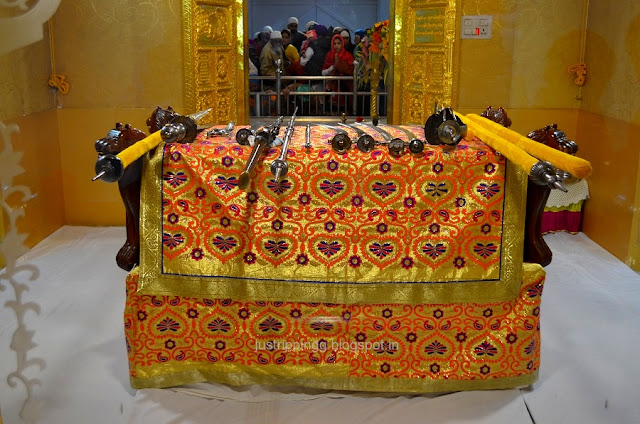 Dusk has arrived. The sky has turned into a glorious canvas. Shabad kirtans waft through the town mellowing the evening. The dome of Takht Sri Keshgarh Sahib seems to glow like the setting sun. You make your way to the gurudwara that is one of the five Sikh religious seats. On the occasion of Baisakhi in 1699, Guru Gobind Singh had asked his followers to come to Anandpur. Here he baptized the Panj Piaras (Five Beloved Ones) thus establishing a new community called the Khalsa or the Pure. You are just in time for the ceremony called ‘Shastran de Darshan’ where the weapons are brought out reverentially and displayed to the devotees. Later in the evening you sit back on the marble floor outside the sanctum as divine notes of shabad kirtans fill the cool spring night. The sweet hymns transport you to a perfect world of love and peace. That perfect world is right here in Anandpur Sahib and you don’t want to ever leave this utopia. 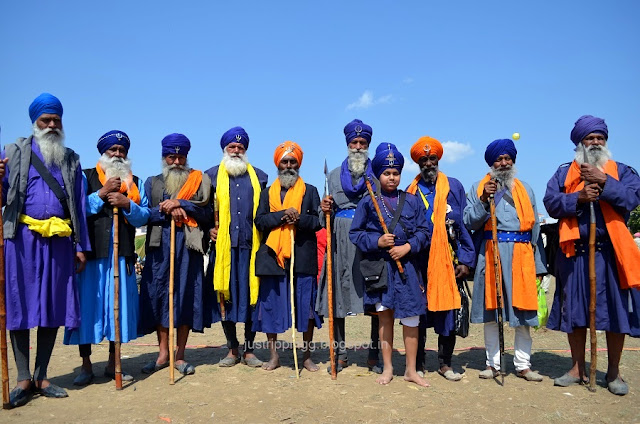 Guru Gobind Singh decreed that the day after the Hindu festival of Holi be celebrated with mock battles. The day came to be known as Holla Mohalla commemorating the founding of Khalsa Panth. The word Holla derived from Halla meaning ‘a military charge’ and Mohalla stands for organized procession. During these three days, the small town of Anandpur Sahib witnesses a deluge of lakhs of devotees. A sea of humanity wades through the streets paying obeisance at the various gurduwaras and partaking of meals at the scores of langars set by villagers. On the final day, people gather at the stadium to watch the spectacular events put up by the majestic Nihangs that include gatka or mock encounters, tent-pegging and bareback horse riding and standing up on single, two and even four horses.

A version of the story appeared in the June 2017 issue of Rail Bandhu, the on-board magazine of Indian Railways (Pages 62-65)