The Purple Rain of the Moulmein Rosewoods – A Photo Essay

If last year cruising down Mahrashi Raman Marg was a passing shower, today the walk through Shanti Van is a hazy drizzle that soon turns into Purple Rain. The weather app early in the morning indicates ‘Hazy’. A few hours later you realize it should have said ‘Purple Haze’!

Moulmein Rosewood (Millettia peguensis) just like it’s pretty name is one of Delhi’s most beautiful flowering trees. Last year, in Lodhi Estate, you saw the charms of the tree for the first time as the main avenue tree. Some of the trees were tall and straight while others looked deciduous with widely spreading canopies. For a brief period in April, the tree becomes bare and gets draped in this diaphanous mauve mist as described by Pradip Krishen. Later you saw a grove of the trees in Mahavir Vanasthali looking as resplendant as 'Jewels on a String', a sobriquet which cannot be more perfect.

Last year as you walked through the scintillating Barna universe in Shanti Van, you knew that you had just missed the purple rain. And as always pre-ordained you arrive on the perfect day this year. Shanti Van probably has the largest concentration of the trees in Delhi. Even as the Palash trees burn orange bright, Pilkhans change colours every minute, the lone Siris perfumes the air; the Moulmeins ripple in the breeze showering the grounds with this this purple and mauve haze.

There is something absolutely beautiful about the pearl like flowers. Sometimes they seem like porcelain glinting in the early sun. The flowers cascade down like necklaces adorning apsaras, shimmering and swaying in the cool breeze. And then with every gentle gust of the breeze the flowers drizzle down in a dream-like sequence.

Essentials:
Moulmein Rosewood or Jewels on a String is a legume tree species in the genus Millettia and belongs to the family Fabaceae. It is native to Myanmar and Thailand and does pretty well in Delhi’s dry climate. Lately, because of its ease of growing, Moulmein is being widely planted as an avenue tree with its shady canopy and beautiful flowers. Moulmein can be confused with Karanj or Pongam tree but the trees look quite different and Karanj flowers are much less conspicuous and certainly not massed as Moulmeins. The tree does not seem to have any medicinal uses and is probably used for its timber.
==================================================

On the southern bank of the lake is a large grove. The ground is paved with purple gems. You have walked into the Nizam’s locker. There are necklaces dangling all around. You look up, the sky is a million twinkling mauve stars. You will just sit here on the grass for few moments. The flowers fall like pearl drops pitter-pattering. You are a part of this melodious song of this exquisite movie playing all around you.

This is perhaps one the most beautiful sights of your city that is mostly reviled for all its modern age afflictions. This is an antidote. This is the elixir that makes the city still beautiful and the best place to be in.

Let’s walk through the Purple Rain and Let It Rain! 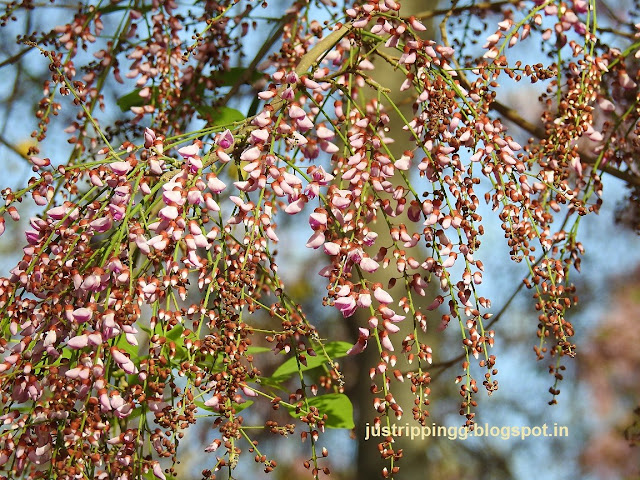 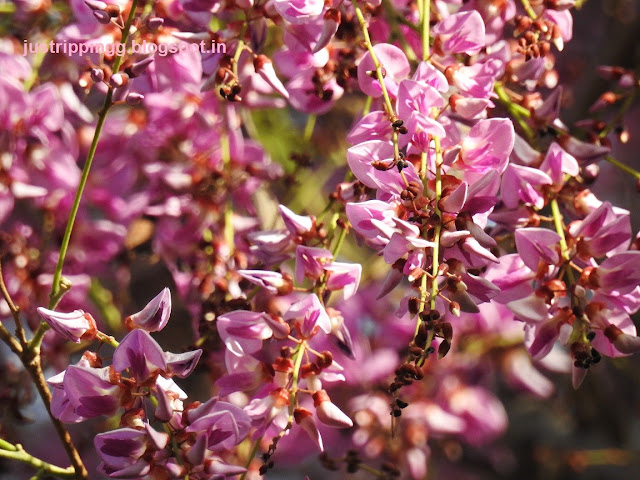 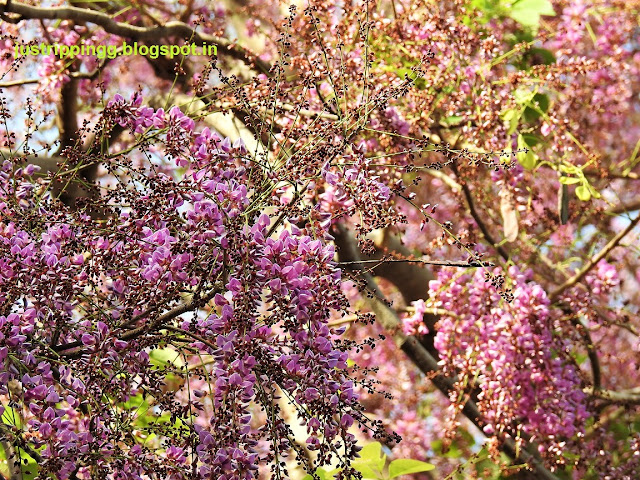 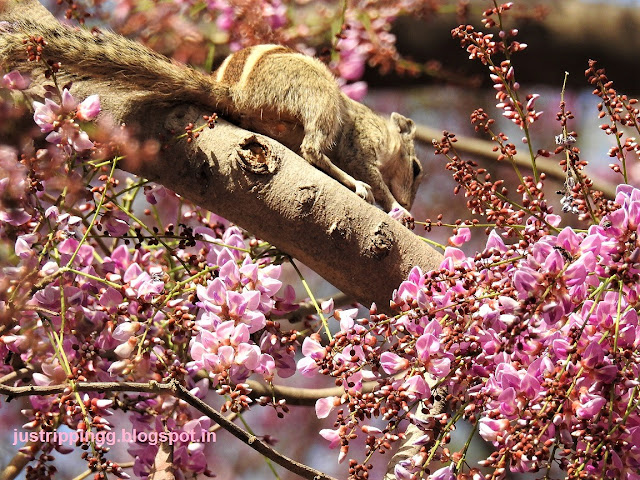 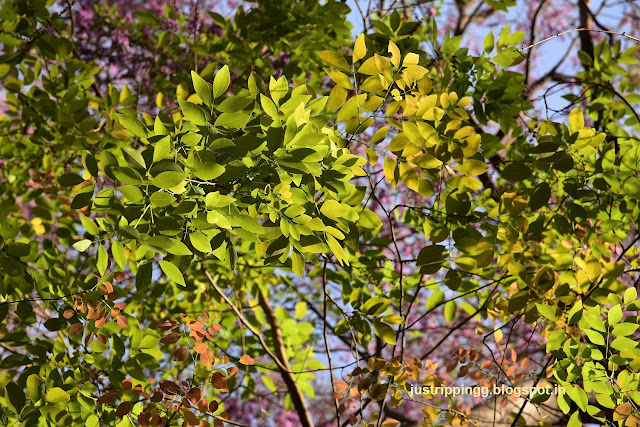 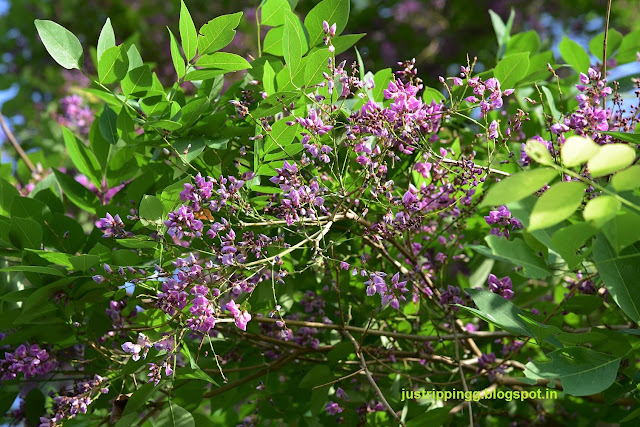 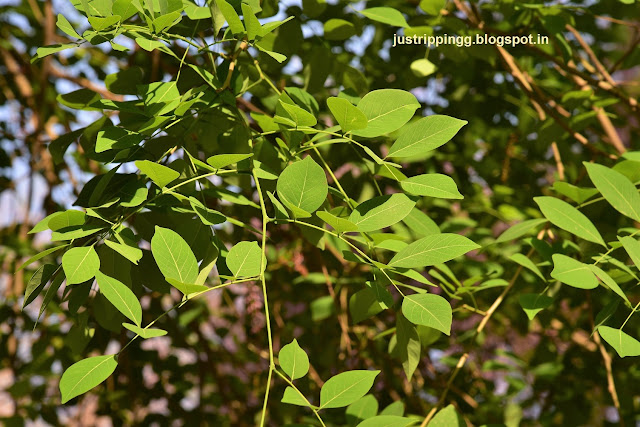 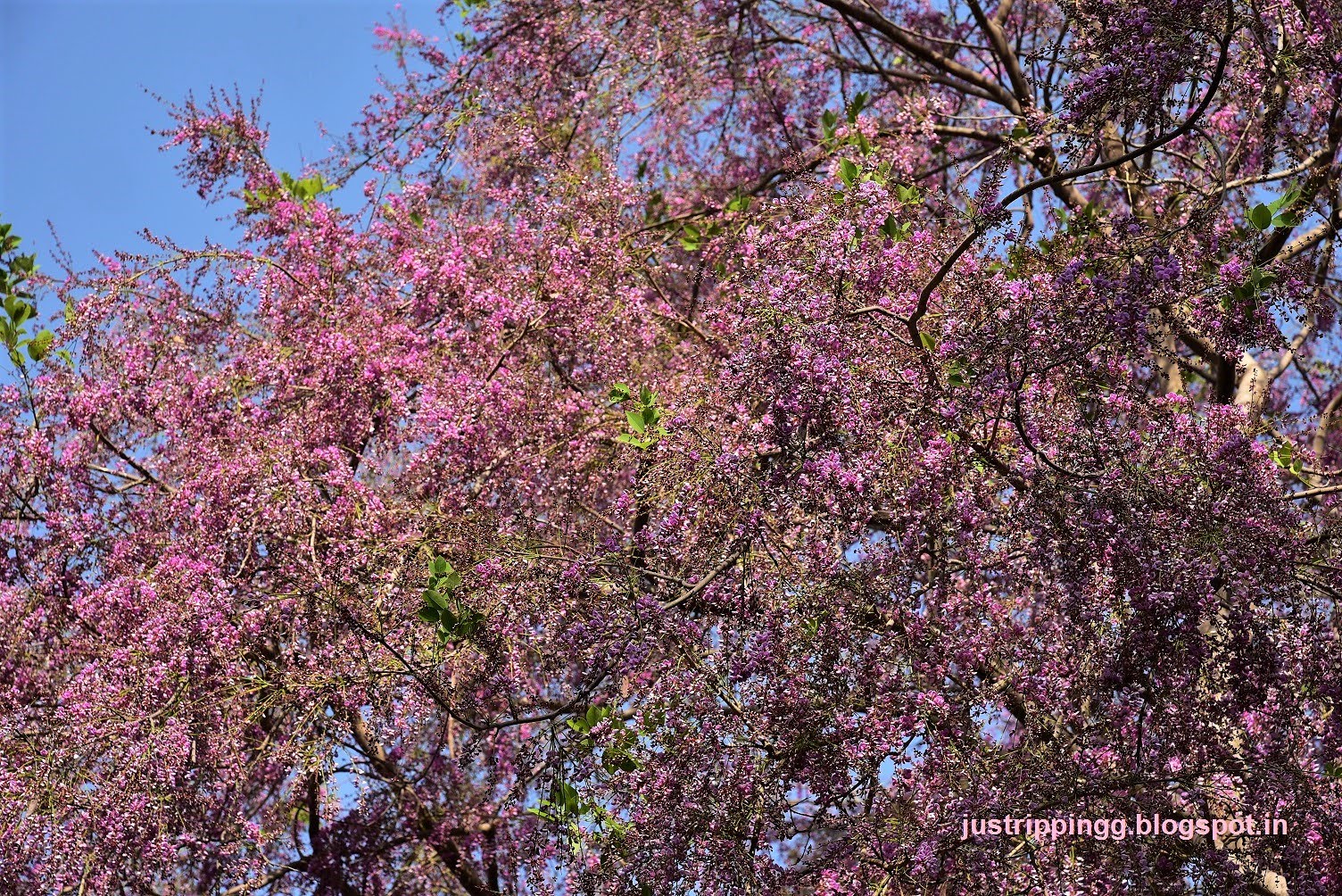 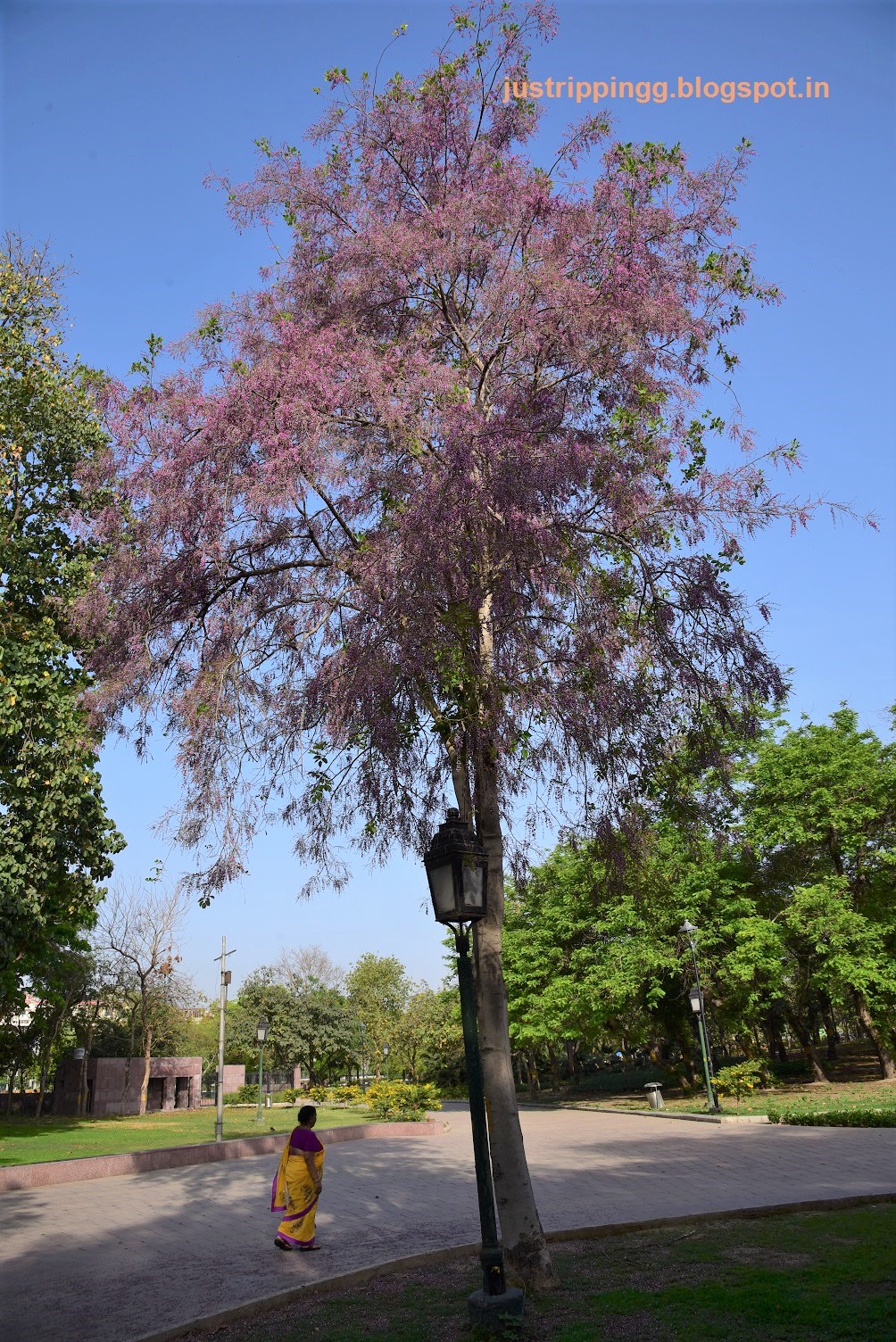 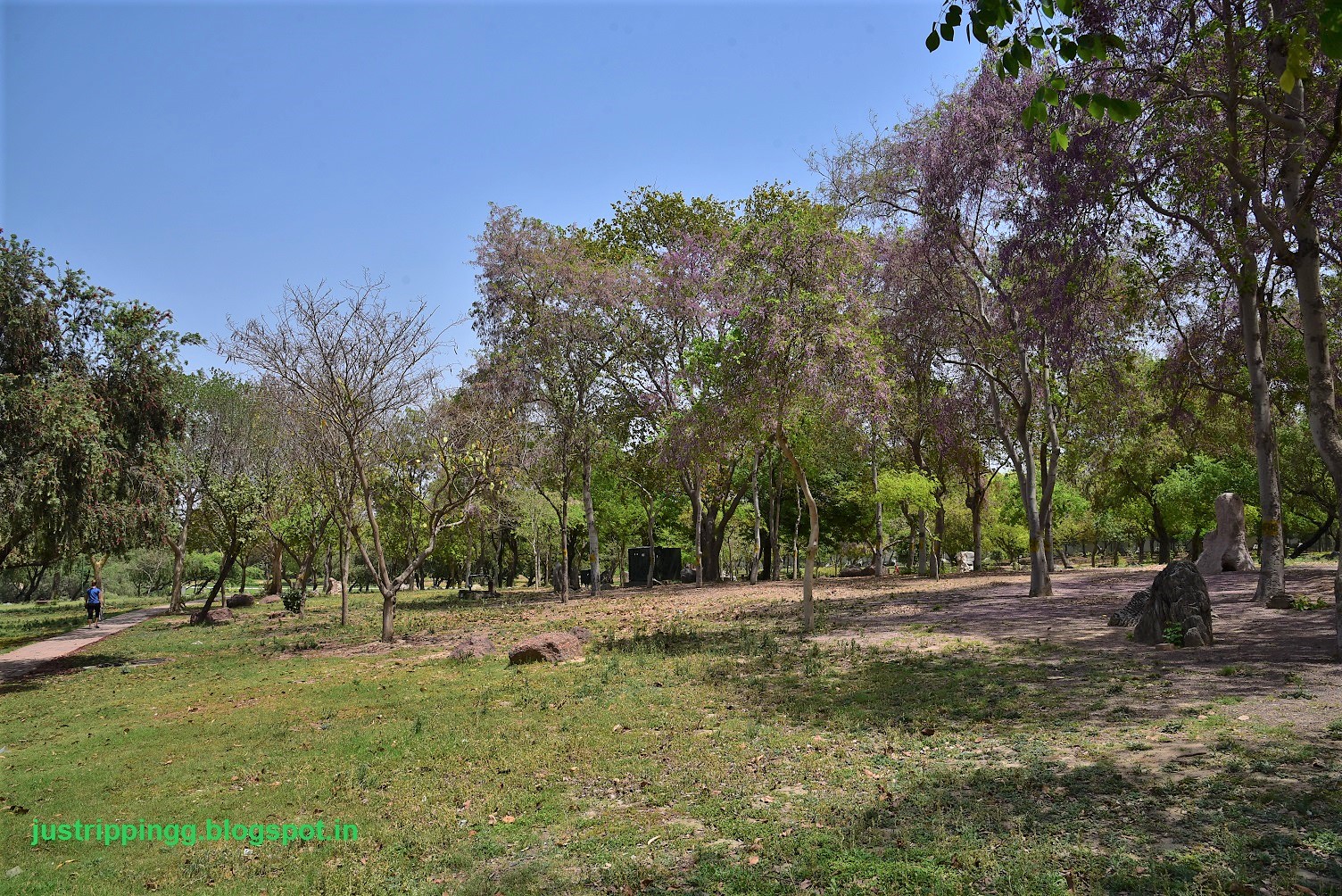 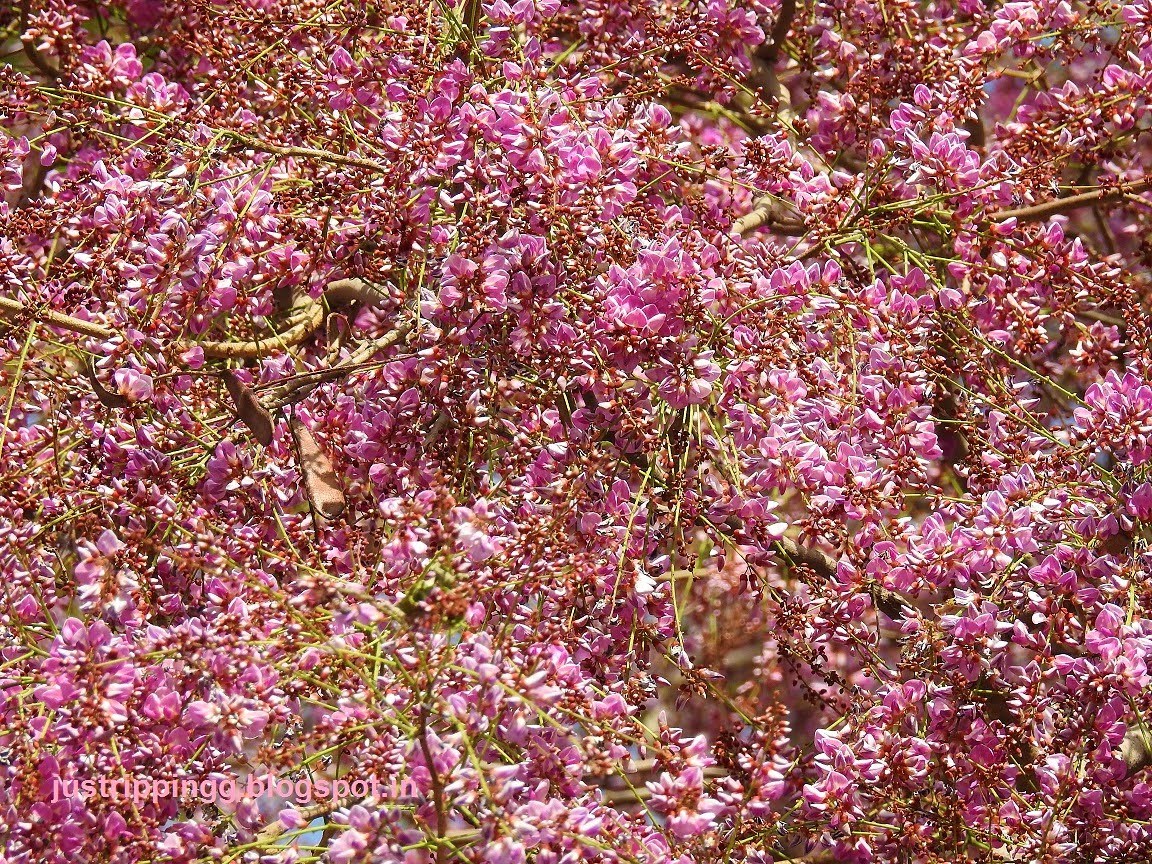 The Riotous Summer
The Glittering Universe of Barna


Spring Song of Delhi - Part I


Garden on the Landfill - Indraprastha Park


Love in the Times of Amaltas

The Scorpion Woman of Khajuraho

Woman of Indian Sculpture - Part I

The scorpion chooses its quarry carefully. The women are all alone, unbelievably voluptuous and sensuous and in various stages of disrobing.

You are totally bewitched with the recently seen image of this voluptuous woman with a scorpion on her thigh. A woman whose breasts defy gravity and who will never need a corset, disrobed and exposed. Simona Cohen describes her as ‘full-blossomed young apsarā (Celestial Nymph) figure who is provocatively displaying the sexuality of her ripe breasts and exposed genital area’. You have seen erotica in Khajuraho and Konark and have seen lone women giving pleasure to themselves but you do not remember ever seeing this iconography of a disrobed and exposed woman with a scorpion climbing her thigh.

Now that you notice, apart from the few images of Gods and their manifestations, the sculptures mostly capture the forms and moods of 11th century milieu. In most images, the women are shown with their partners dressed in finery and adorned with some fantastic jewellery and hairdos. Others, but very few compared to Konark which has erotica spread over every inch, show amorous men and women, sometimes with multiple partners, engaged, how to put it, in varying and innovative styles of rumpy-pumpy. 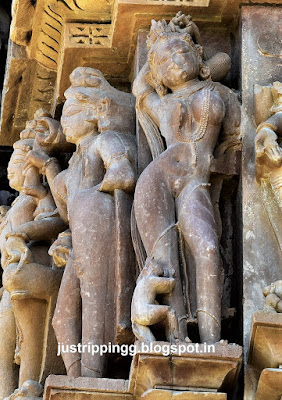 You look for the lonesome ones. Wait a minute – finally! But what is this? The woman is undressed but there is no scorpion on her thighs. Instead a little monkey is tugging at her wraparound like dress. And then you see the figure next to her. She too is in in the act of disrobing revealing her genitals. You can make out the disfigured form of a scorpion on her left thigh. This is exciting. More digging and you come up with several images from several places and across temples. There are a total of 22 extant Scorpion Apsaras in eight temples, with the grand Kandariya Mahadev Temple alone having twelve images.

And what about the image that got you started in the first place. You are not sure if the image is currently housed in some museum or it is one of the 22 images still extant in some projection of the temples.

So, what does the scorpion on the thigh signify and why is only the Apsara associated with the scorpion?

Simona Cohen examines this in her interesting paper which you will try to summarize here:

Apsaras are the heavenly nymphs that came into being during the Churning of Ocean, are grouped with the Gandharvs, live on Mount Meru and have names like Urvasi, Menaka, Rambha, Tilottama, Sukesini, Manorama. The Apsaras can be usually found playing musical instruments and dancing with Gandharvs. Hoysala temples have the musical aspect of the Apsaras. Apsaras are also known to corrupt sages as embodiment of sexual desire and pleasure. No literary evidence exist that explains the iconography of the Apsaras so there is no way of knowing why a scorpion sits on the thigh.

Britannica says:
Apsara, in Indian religion and mythology, one of the celestial singers and dancers who, together with the gandharvas, or celestial musicians, inhabit the heaven of the god Indra, the lord of the heavens. Originally water nymphs, the apsaras provide sensual pleasure for both gods and men. They have been beautifully depicted in sculpture and painting in India and throughout areas of South and Southeast Asia influenced by Hinduism and Buddhism. Notable examples are the 5th–6th-century frescoes at Ajanta in India and at Sigiriya in Sri Lanka and the sculptures and bas-reliefs decorating the temples of Angkor, Cambodia.

Scorpion or Vrscika (Sanskrit) has been used as symbol of procreation and fertility. Scorpions and serpents are worn as necklace by Shiv in Aghora aspect. The Agni Purana prescribes an herb called vrscika (the Sanskrit word for scorpion) for the cure of epilepsy. So scorpions can be used as apotropaic image on talismans, the body, or the temple.

The earliest such iconography was seen on a seal of Indus Valley. A female figure / goddess is seen flanked by two scorpions displaying her genitals. The constellation of the scorpion controls the genitals, sexual passion, fertility and progeny. Bhadrakali, a fierce emanation of Parvati is the scorpion goddess and is shown with a scorpion on her emaciated belly; a total opposite of the Apsara. One of the Yoginis of Hirapur Odisha has scorpion as her Vahana. Four different verses of the Yavanajataka (4th to 6th century), emphasize the association between Scorpio and the genitals. Al-Biruni, in his book on astrology, written in 1029 A.D. just about the time that the Kandariya Mahadeva temple was constructed and shortly after his own trip to India with Mahmud of Ghazna in 1022 A.D., states that in India, Scorpio was associated with the genitals, fertility, progeny and hermaphrodism.

Are the Apsaras actually wearing scorpion amulets? Tribals around Khajuraho who worship village deities still wear ancient scorpion amulets. In Bundelkhand, the girl in the course of the rai dance, sings that she will die because a scorpion has bitten her. Scorpion here is her lover. In contemporary Gujarat, the women have motif of scorpion embroidered on their ghaaghro. The scorpion is malevolent towards any man trying to steal the woman from her husband. Further, in Bundelkhand, a horny wife is called dankini and in Rajasthan a sex-obsessed wife is called bichchhuri, pointing to the observation that a female scorpion usually kills the male after mating.

Now’s the Time for the Breakdown!

Scorpions have ambivalent characteristics – they both kill and protect. Temples always had erotic imagery as prescribed by sacred literature and shilp texts which had both Propitious - Apotropaic purposes. So, for a brief time in the making of Khajuraho temples, especially during the raising of Kandariya Mahadeva Temple, the Shilp-in-Chief got this idea of putting a scorpion on the thigh of this overtly oomphy Apsara. The sensuous Apsara, breasts filled with amrit, uninhibited and seductive will be the epitome of free-spirited allure that is Khajuraho. The Skunk Works team sat down to decide the iconography. Word is sent out in the neighbouring villages and some voluptuous maidens descend into the studio with live scorpions. The Scorpion Apsara will be clad in this diaphanous sarong like outfit and the sculpture will capture the moment when she sees the scorpion on her dress climbing up her thigh. She will be shown untying the knot around her waist revealing her genitals.

Now you are not sure if she is supposed to throw off the scorpion thus indicating fighting off the lust and desire or if she is actually preparing for the impending copulation; the raised sting signifying ithyphallic scorpion. Some scholars opine that there is a look of fear in the eyes of the Apsara when she sees the scorpion climbing her thighs. But to you all you see is unadulterated delight and excitement on her beaming face. All the longing and yearning for her lover is just about to come to an end.

This was a huge evolution. While other single women mostly indulge in self-pleasure without exposing themselves, the Scorpion Apsara ups the ante; she is one among the anonymous group of Apsaras who has just graduated from the Plain Jane fertility symbol to full blown femme fatale with in your face explicit eroticism. Instead of being almost utilitarian, even as she throws off her robes, she puts on the dress of ambivalence; just like the ambivalent scorpion, who can kill and protect at the same time, as it makes its way up the thigh towards the sweet world of pleasure. This world is again ambivalent – the participants will experience the highs of both life and death together in those few ecstatic moments. The invoked experience of orgasm is like ‘half-death’ – it is almost halfway to heaven.

The Scorpion Apsarās at Khajuraho: Migrations of a Symbol by Simona Cohen published in JOURNAL OF THE ASIATIC SOCIETY OF BOMBAY Volume 74/ 1999
Simona Cohen (Professor Emeritus), Art Historian at Tel-Aviv University, has published extensively on Renaissance iconography, Venetian painting, medieval and Renaissance animal symbolism and depictions of Time. Her recent books, Animals as Disguised Symbols in Renaissance Art, and Transformations of Time and Temporality in Medieval and Renaissance Art, were published by Brill (2008 and 2014). Indian Art History is her second field of research and teaching.

The Case of the Vishnu Idol


If you liked the blogpost then