Wading in the ankle high water, I have stumbled upon a marine life wonderland. A wonderland, I had resigned to my fate, I could only watch on the infotainment channels on TV. Someone who is scared of swimming, leave alone snorkelling or scuba diving, I knew there was no chance of ever watching live the spectacularly colourful marine life. Things are about to change.


The Narara Marine National Park and Sanctuary in Gujarat has come as a pleasant surprise as I road trip across Gujarat. I have visited National Wildlife Sanctuaries, National Parks and lately even a Geological Park and Jurassic Park but this is the first time I am hearing about Marine National Park. I am heading west towards Dwarka from Jamnagar along the Gulf of Kutch. This is the petrochemical hub of India with sprawling refineries and related paraphernalia of mushroom like storage tanks and lines of tankers snaking around. It is hard to imagine a marine park co-existing with oil - oil and water simply do not mix.

Turning right on the highway towards Vadinar, just past the Reliance refinery and few kilometres ahead, the creeks of Gulf of Kutch make their entry parallel to the dirt road that leads to the marine park. Birds tiptoe on their long slender legs poking into the water. Stopping at the reception to buy entry ticket and to engage a guide, I am on my way to the promised land or rather the promised waters. This is the low tide time that stretches for twelve hours between two high tides and the perfect time to explore when the water is about a foot high. These tips came from the nice hotel owner in Jamnagar.
﻿
We make our way through a barrier of mangrove forest with aerial roots spurting through the ridge patterned sand banks to emerge into the vast reef. The Gulf of Kutch wraps us all around as it extends deep into the horizon.  Established in 1982, the Narara Marine National Park is India’s first Marine Park sprawled over about 160 sq km and is part of the Marine Sanctuary that encompasses a group of 42 islands ranging from the well known Pirotan Island to Dwarka Beyt. But here is the beauty of Narara. There is no need to ride boats or wrangle for permits. All you need is to arrive at low tide times and simply start walking. Narara turns into nature’s marvel when waters recede and the flatlands come alive with marine life around your feet.
﻿
About walking for a kilometre we arrive at the shallow waters. I am finally going to fulfil my wish to see the incredible world of marine wildlife and that too by just walking and splashing in the water. The show has begun as I walk around the rocks draped in wavy algae. Creatures of the sea dash around my ankles. Sun light creates magical shifting patterns on the rippling waters.  The disturbed sediment on the bed settles down even as I watch and the water again turns spectacularly clean. In the company of refineries and chemical plants, I can only marvel at the crystal clear waters.
﻿

The guide has bent down and is poking the rock with his stick. Holding in his hand is the first catch of the day! He has a crab in his hand flailing his chelipeds or pincers. The marine creatures are masters of disguise but it is only the trained eyes of a guide who can spot them as they seemingly blend in with the background. After the little guy is photographed, the guide gently releases it into the water. 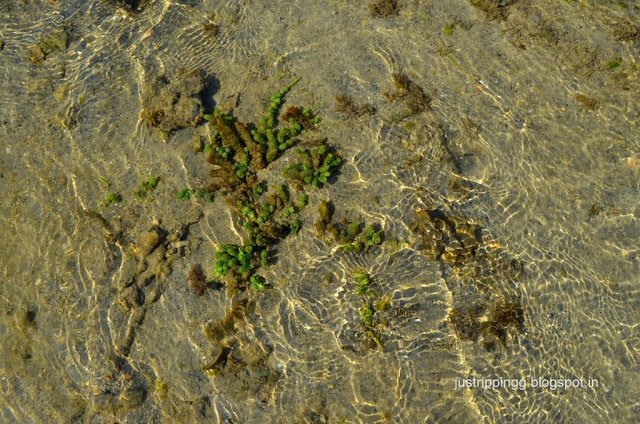 Here at your feet is wonderland of sea life. The waterscape is littered with these rocks that have green algae or sea lettuce clinging to them. The sea lettuce being rich in proteins is a source of food for both sea animals and humans. Some rocks seem to be wrapped in the cellophane like lettuce. The rocks that form this reef are actually corals formed by secretion of calcium carbonate and over time have taken the looks of these grey and dark rocks. But once upturned these rocks reveal the multicoloured corals underneath. There is a whole world of animals embedded on their uneven surface - brittle stars related to starfish cling to the rock with their whip-like five arms even as a sea cucumber is trying to burrow into a hole.
﻿ 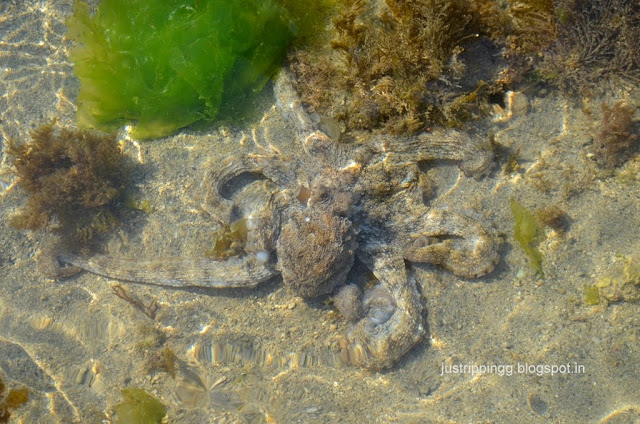 ﻿
The guide is just warming up. Scanning the waters he picks up variety of creatures – there is a furry wolf crab looking like all dressed up for a trip to tundra; a colourful crab lights up the day as the showstopper, a sea cucumber looking as interesting as, well, a cucumber. It takes time to find one but soon the guide is duelling with the tentacles of a slimy octopus! Seeing an octopus is a marvellous surprise. Once released, it glides through the waters. There is brown sargassum weed eclipsed by the luminescent flowing green algae. Clumps of bead like sea grapes, another variety of green algae, bring in variety to the vegetation. And then there is whole another world of corals – a brown coral that looks like a human brain, while another looks like a flower with purple petals and then there is this coral that looks as if the contents of a pink paint tube have been squeezed on to the rocks.

We have walked several kilometres away from the mangroves. The afternoon is cool as I survey the vast waterscape all around. So far I have walked and trekked through national parks; this is the first time I am splashing around in water and getting dazzled by this colourful littoral marine world which I had no hope of ever witnessing up this close and personal.
﻿
My reverie is broken as I see the guide darting around. Is there a crocodile chasing him? No, it is apparent that he has spotted another slippery animal. Finally, he bends down, scoops up his catch and presents it to me triumphantly. My eyes pop out. The guide is holding an almost spherical creature which from its pouty mouth should be a fish with plasticky skin armed with spines. This is the puffer fish which in event of being threatened by a predator drinks up on water to suddenly look not so edible. In fact the blob like appearance looks intimidating. Even as the fish is held in the hands, water is leaking water from its mouth. Apart from sudden evasive burst of speed – no wonder the guide had a hard time catching it – the sphere like fish looks pretty unattractive to a would be hunter. The sullen looking ball of a fish is lowered into the water and it almost immediately transforms itself into a regular fish swimming away.
Narara Marine National Park is a little secret tucked away behind refineries and surprisingly, below these absolutely clear waters, pipelines bring crude oil from tankers berthed in the high seas that feed the refineries. For once I am happy that Gujarat Tourism is not promoting the park. The vast sight of unspoilt and clean waters with its cornucopia of marine life will fare better without us.  The puffer fish would prefer fewer drinking binges.

Getting There: Narara Marine National Park is about 55 kms from Jamnagar in Gujarat. Remember to turn right towards Vadinar just beyond the Reliance Refinery. Jamnagar is about 300 kms from Ahmedabad.

Travel Tips: Find out the low tide timings before visiting. You will need 3-4 hours to completely enjoy the park. Wear sandals/floaters as you would be wading in about knee deep water. Carry water if you visit in hot months.

Marine Parks of India
Surprise Surprise! Narara Marine National Park is not the only Marine Park in India - there are five such Marine Parks and Water Sanctuaries. Mahatma Gandhi Marine National Park in Andaman & Nicobar Islands, about 30 kms from Port Blair has reefs and is a breeding ground for different turtles including the Olive Ridley Turtles. Gulf of Mannar Marine National Park near Rameshwaram in Tamil Nadu is a group of islands that are home to Dugong, a vulnerable marine mammal. Malvan Marine Sanctuary is located near Malvan in Maharashtra and if lucky you can spot dolphins here. Gahirmatha Marine Wildlife Sanctuary in Odisha is the beach where mass nesting of Olive Ridley Sea Turtles takes place.

A version of the story appeared in the October 2016 issue of Rail Bandhu. Rail Bandhu is the on-board magazine of Indian Railways available on Rajdhani, Shatabdi, Duranto and Gatiman express trains. 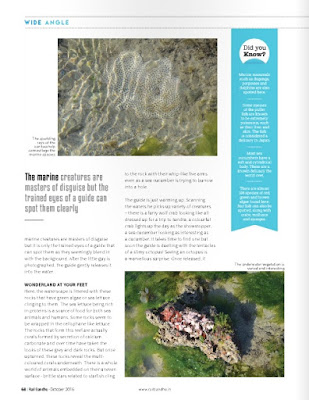 Visit to Narara was part of the Great Gujarat Road Odyssey


Related Links on this blog