While the living Virupaksha Temple dedicated to Lord Shiva and his two consorts towers over Hampi, it is Lord Ram and Ramayana that have the most associations with this evocative World Heritage Site. Anegundi, the village to the north across Tungabhadra, is where the story of Vijaynagar Empire began and where large parts of Ramayana played out. This was the Kishkindha Kingdom when Ram and Lakshman came looking for abducted Sita and met Sugreev and his Chief Minister Hanuman. Here Ram killed Sugreev’s brother Vaali and helped him get back his kingdom. It was in the Pampa Sarovar where they bathed and on the banks met Sabari who fed berries to Ram.

Later the capital was shifted to the other side of the river to Hampi. On the Hampi side, it was on the Matanga Hill that Sugreev had taken shelter and it was on the Malyavanta Hill that Ram and Lakshman waited out the monsoons before marching to Lanka. And it was exactly during these months of September and October when the rains subsided that the grandest festivities took place in Hampi. The festival was called Mahanavami when for nine days the capital would host the most opulent celebrations.

Mahanavami too has association with Ramayana. Ram had prayed to Goddess Durga for victory just before the final battle with Ravana. The rulers of Vijaynagar too worshipped Durga praying for strength to subdue their enemies. Military campaigns were initiated after the Mahanavami celebrations when the display of power and wealth would make any future belligerent wary.

All tourists begin their visit to Hampi by paying obeisance at the Virupaksha Temple before they make their way to Royal Enclosure. In the aftermath of Battle of Talikota, the capital was sacked and pillaged. Today, the Royal Enclosure besides some fortifications and later excavations is bare except the dominating three-tiered platform called Mahanvami Dibba. It was on this platform that the King was seated as he witnessed the grand celebrations during the nine days of Navaratri.

On a monsoon day you circumambulate the platform. The lower two levels probably constitute the original granite stages of the platform that was built along with the royal enclosure in 14th century. The relief carvings are a delight. There are processions of horses, elephants and camels. The kings are shown in their courts, on other occasions they watch wrestling matches, dance performances and then they go hunting deers and leopards. Foreigners are seen in plenty indicating that the fame of the glorious kingdom attracted foreign emissaries, traders and soldiers over the years. Foreigners in pointed hats lead horses, hold clubs and even play tambourines.

Two series of stairs – one in front and one in back – bring you to the top of the platform. The view from here is quite exhilarating but you cannot but feel sad about the way the glorious empire ended in an orgy of plunder and destruction. While temples and structures elsewhere have survived, the royal enclosure bore the full brunt and everything seems to have been flattened. On the top of the platform there are extant pillar bases which indicate that wooden columns supported a grand mandap in which the King sat watching the proceedings. In the aftermath of the cataclysmic battle everything was burned down and looted. Now along with the mandap almost everything in the royal enclosure is lost including the possible 40 pillared Diwankhana where the King held talks with his chiefs. 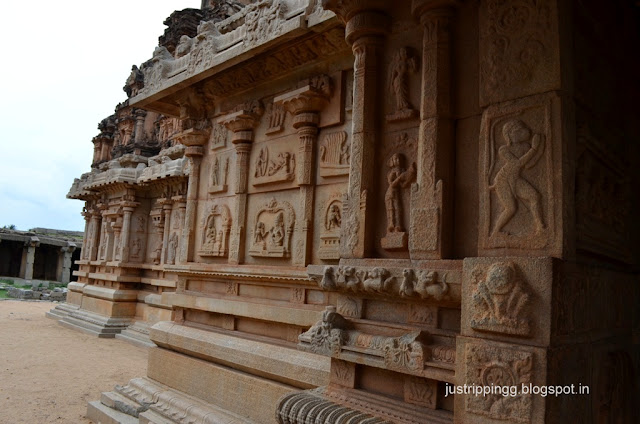 If the Mahanavami Dibba is indicative of association of Lord Ram then the Hazara Ram Temple fully reinforces it. Built by King Deva Raya I in the early 15th century in the core of the Royal Enclosure, it was the royal temple of the Vijaynagar’s kings. The temple is striking in its design and decoration with beautiful mouldings and pilastered walls. The outer compound walls are profusely decorated with similar scenes as in the Mahanavami platform. There are bands of relief carvings of processions of horses, elephants, military contingents and dancing women with sticks reminiscent of Gujarat’s Dandiya Raas. At the entry there is an image of Durga as her fierce aspect of Mahishasuramrdini. The inner compound walls depict Ramayana episodes. The main temple is situated in the middle with a mandap. The mandap walls have 108 scenes from Ramayana including fire sacrifice of Dashratha, coronation of Ram, demon king Ravana in an aerial chariot and Hanuman leaping over the ocean.

Coming back to the Mahanavami celebrations, the impressed foreign visitors to the Vijaynagar Empire have left glowing accounts of the biggest annual celebrations that took place during Navaratri. 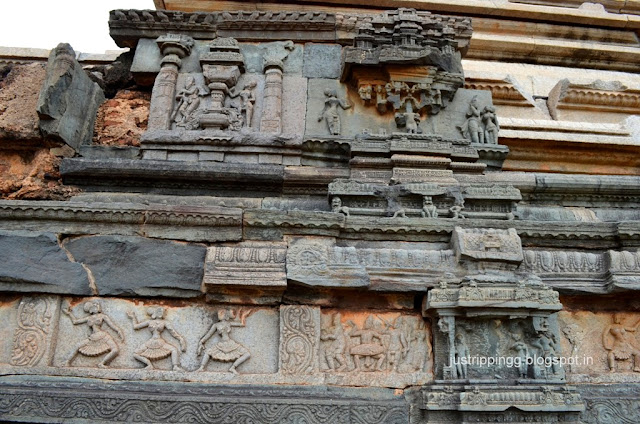 Fernao Nuniz, a Portuguese horse trader who spent three years (1535-1537) in Vijaynagar has written rich chronicles of the life in the empire. The Portuguese based in Goa had taken over the horse trade from the Arabs. The nine day festival according to Nuniz was the most lavish and elaborate. The days were marked with great feasts and pageantry. On the first day, nine castles – probably tents - made of rich cloth were erected in front of the royal palace for the nine principal captains or governors of the empire. Sacrifices of animals were carried out. During the ceremonies the King was seated on a throne made of gold and gems. This was the only time during the year when the king sat on this throne on top of Mahanavami Dibba. Nine horses and nine elephants bedecked with roses and silky trappings and accompanied by a great number of attendants saluted the king and when all the governors and commanders would descend into the capital to partake of the celebrations and pay tribute to the King.

The celebrations continued for nine days when each day rivaled the other with extravaganza and pomp. Abdur Razzaq, ambassador of the Persian ruler Shah Rukh, visited Vijaynagar in 1443 during the reign of Deva Raya II. He says that Ashtavana or the Revenue Department was abuzz as all the Captains or Nayakas descended on the capital to partake of the grand celebrations and to pay tribute and pledge allegiance, money and soldiers to the King. The Nayakas were given a part of the land in lieu of military assistance and annual tribute.

Domingos Paes was another Portuguese traveller who visited Vijaynagar around 1520 during the reign of King Krishna Deva Raya when the empire was at its zenith. Paes’ chronicles are supposed to be the most detailed of all accounts that have been written about Vijaynagar and he corroborates the enthusiastic account of Nuniz. Paes also describes the magnificent celebrations during the nine days of Navaratri. He identifies the Mahanavami Dibba as the House of Victory which was erected after the victory over Orissa and on which the King is seated during the celebrations.

Paes is also dazzled by the extravagant display of opulence. It seems everything from horses and elephants to queens and the dancing women are heavily weighed down by the huge amounts of gold, rubies and pearls they are carrying on their heads and limbs. In some cases, attendants help them by supporting their arms. The royal enclosure was accessible to only the captains and chiefs and was entered through a series of secured gateways. The inside of the enclosure was a grand show of handsome cloths, Mecca velvet, silks from Persia and brocades of China. Great slaughters of animals took place in the mornings after which prayers to the idol were carried out. The feast began in the afternoons. When the night descended thousands of torches were lit turning the night into day. Festivities continued as wrestlers went about their business of disfiguring faces. The women dancers are burdened with diamond collars, bracelets and armlets of rubies and pearls, series of heavy girdles that hang down till their thighs and anklets with all imaginable precious stones that it is difficult to believe how they could amass such wealth. The king is seated on the throne. The captains salute and pay their tributes. And then the night sky is lit up with an eye popping display of fireworks. The festivities continue for nine days, the intensity and scale growing grander each day.


Standing on top of the platform at dusk you survey the ruins around the royal enclosure. With the detailed description given by Paes it is not hard to go back 500 years to imagine today as one of the Navaratri days. Happy people are dressed in their best, priests chant shlokas, and governors size each other up. The King resplendent in his white embroidered clothes jokes with the numerous beautiful women all around him; his jewels catch the light of the thousands lit torches even as his mind fine-tunes his next military conquest. The trained horses prance and the caparisoned elephants trumpet at the command of their masters. For nine days, the plundered and barren capital of Vijaynagar Empire relives its old glory days.

A version of the story appeared as the Cover Story in the Spectrum supplement of Deccan Herald dated 20th Sep 2016.


Revisiting the Past Grandeur 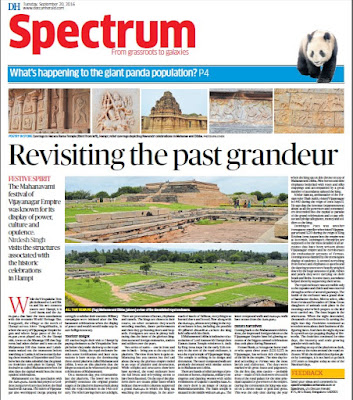 Related links on this blog:
Prehistoric Art near Hampi http://justrippingg.blogspot.in/2016/07/onake-kindi-gated-prehistoric-rock-art.html