Udupi – What’s on the Menu? The Isthumus Surprise of Kodi Bengare

Day 2 – Second Half: Between the Roaring Arabian Sea and the Serene Suvarna

Western Coastal India and Konkan have been bringing you surprises every day - the sailboat ride to the mighty unassailable island fort of Murud-Janjira, the magical light show over the waves at Ganpatipule Beach and the soaring Konkan railway ride high over the hills and Arabian Sea.

Udupi has treated you with sumptuous surprises and now signs off with a surprise dessert. Long ago in your geography classes you have studied geographical terms like Isthmus, Spit and Estuary. Today theory turns into a practical class. 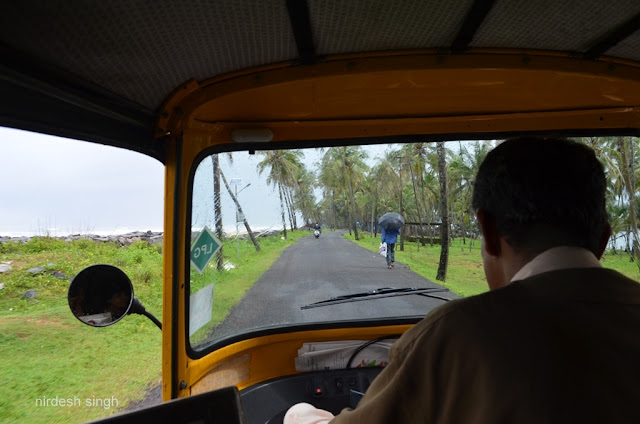 About fifteen kms north of Udupi city centre, you are driving along this narrow strip of land. There is a thick canopy of coconut trees on both sides. You can actually feel the land go narrow as you catch glimpse of water on either side. The houses that you saw at the beginning continue to appear, surprising you. You can see waves through the houses on the left. On the right you can see gently flowing waters. You are finally on an isthumus, a spit or strip of land that separates two water bodies. 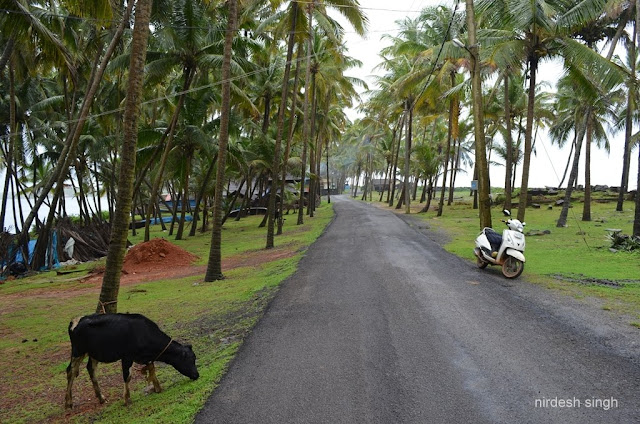 You need to check this out. At this point the width of the strip of land is barely 75 metres – the sea is on the left, row of houses line the beach, then this road in the middle, another row of houses on the right and then the river. Unbelievable! And people still live here apparently unperturbed.

As you walk to the river, a picture postcard view materialises. Coconut trees line the river bank on both sides. One of the tree’s trunk grows horizontally – a coconut tree that is featured on every travel brochure of a beach. And between these trees up on the river a boat comes into view. These are the moments God sends your way to reward you for your efforts. 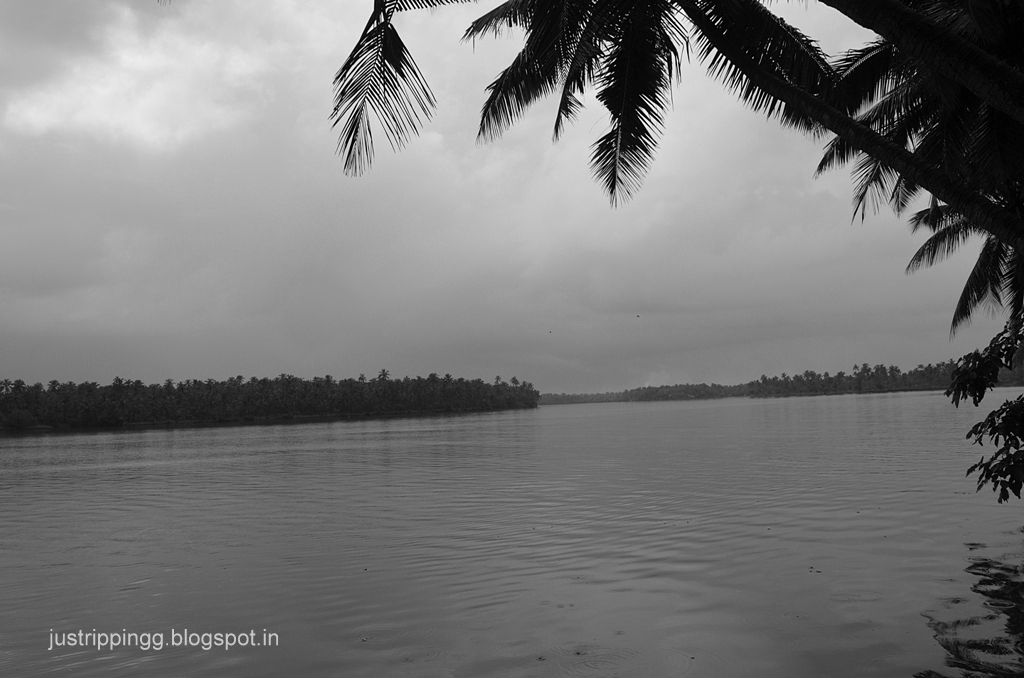 This place right here is absolutely idyllic. The intermittent rains make everything green and dewy. In the early afternoon it seems the houses sit empty with cattle grazing tied to the trees. All you can hear is the waves and birds twittering. This is an incredible place where you can hear both waves crashing and the river flowing silently. 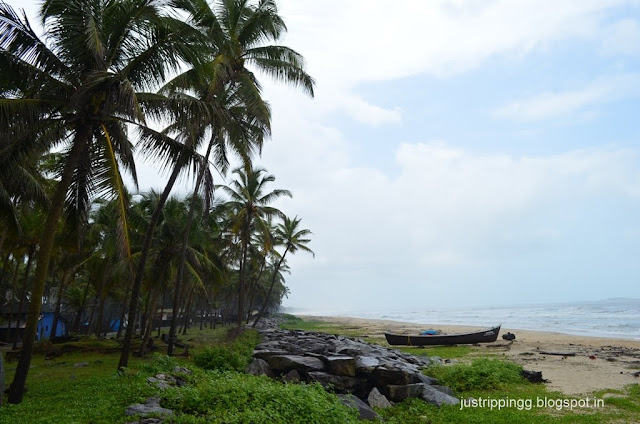 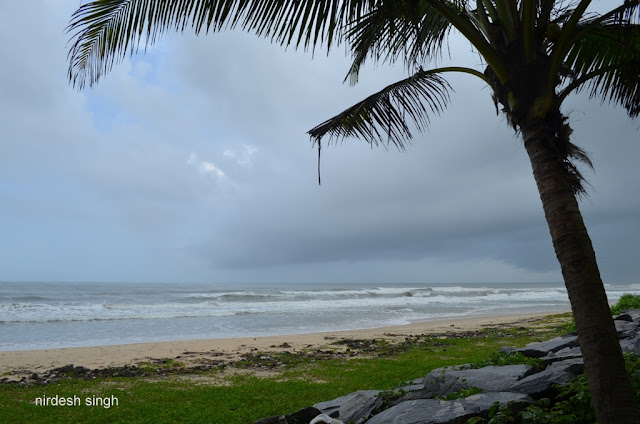 On the other side beach stretches out into the distance.

It is time to go to the northernmost tip of the land where the sea and the river meet. The road runs into the tall wall of stones that block the view to the waters. The authorities apparently have erected this rock barrier to protect the community of houses from the rampaging waves of angry Arabian Sea. You can still not get over the fact how houses have been allowed to be built on this narrow tongue of land with water on both sides.

The flipflops make it difficult to climb over the irregular blocks of stone placed haphazardly. Wet Konkan and Goa has taught that it is a bad idea to wear floaters all day walking in the rains. At the end of day, the toes come out bleeding. So you are letting the toes breathe in flip flops. Hanging to the camera you manage to jump on the sands on the other side. The camera is still not focussing well and you are trying to coax some decent frames out of it. 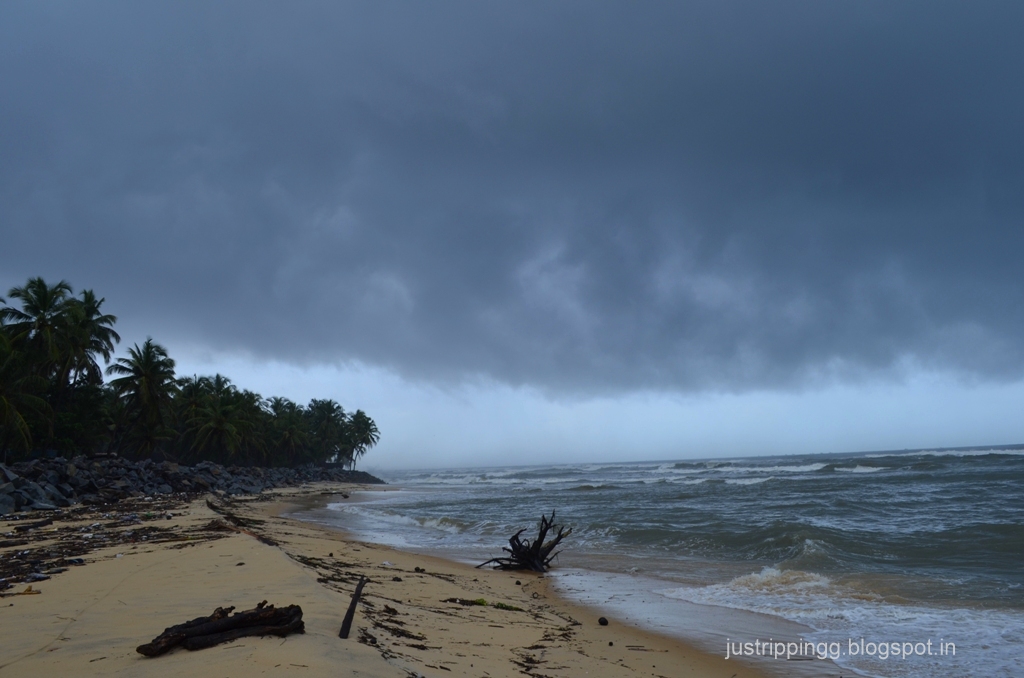 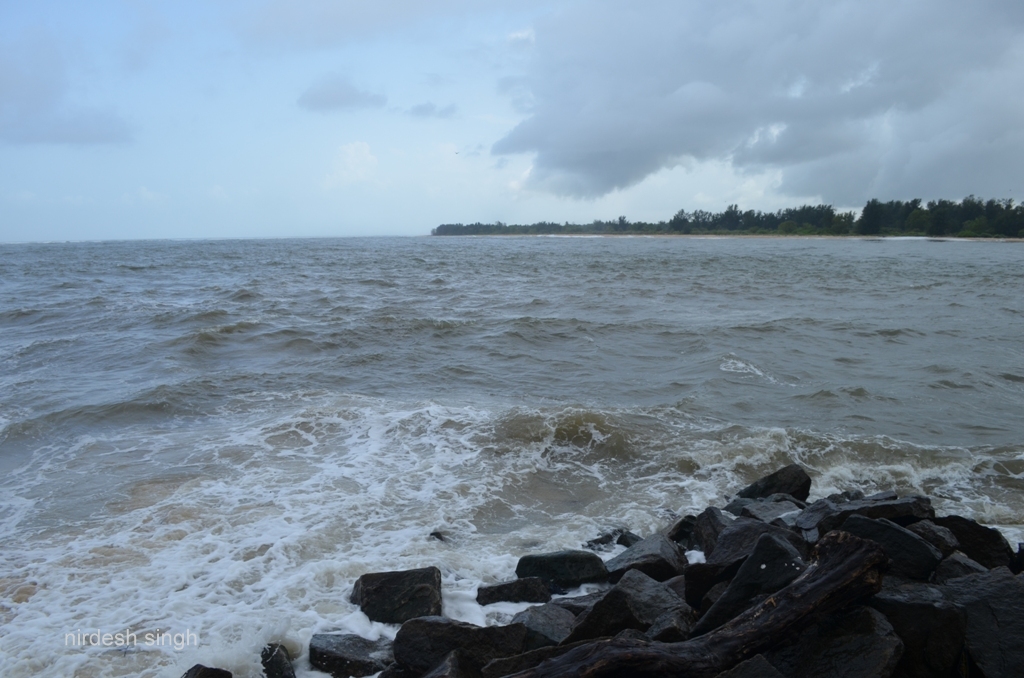 Here on the sand you can witness the full wrath of the sea. Every few minutes you have to scamper back to the safety of the rocks as the waves crash against the man made wave breakers and work up a furious surf. The battered beach is littered with vegetation remains. Dark menacing clouds return to the sky. It seems it is a matter of time before the sea reclaims this land. Just beyond all this fury the River Suvarna flows gently into the sea forming the Suvarna Estuary. An estuary forms a transition zone between river and marine environments.

You climb back in to mount the wall again to the right to observe the estuary. The colours of the river and sea waters definitely look different. So while below the sea is all froth and fury trying to dislodge the rocks, just beyond, Suvarna tiptoes silently into the sea. 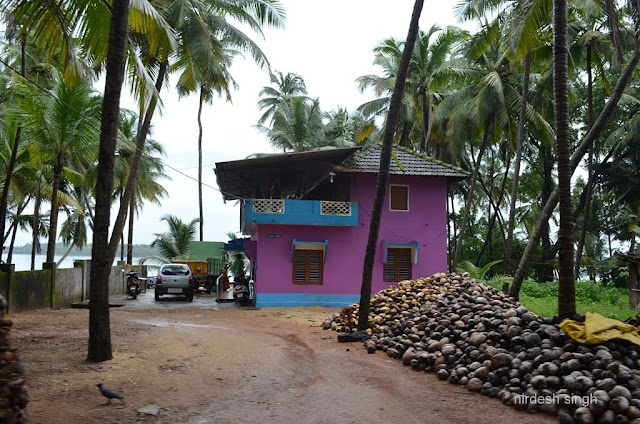 It is time to retrace your path back towards the mainland. Going back you enjoy the colourful houses. People in North need to look beyond their whites and ivories and creams. One feature you love about southern India are the colourful houses – whether it is around Vijaywada in AP or Old Goa or here in Kodi Bengare. The houses look resplendent in the Technicolor palette. 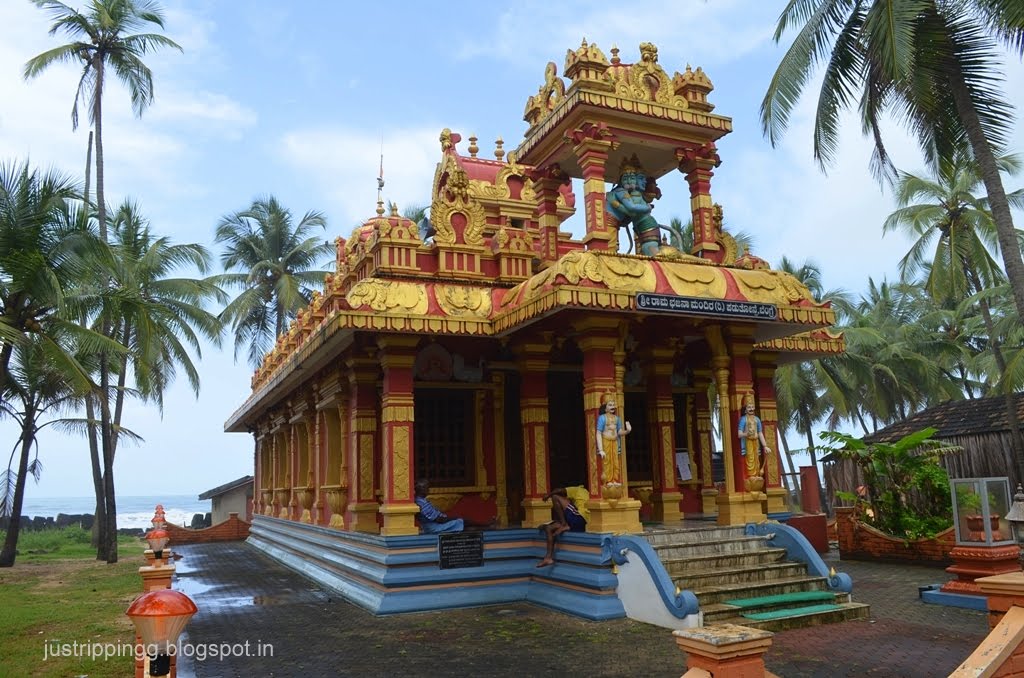 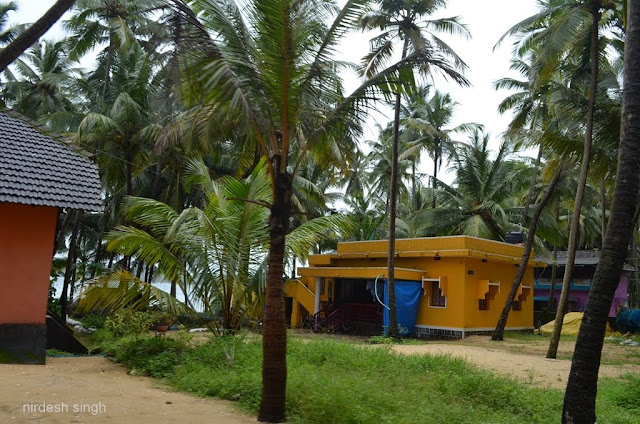 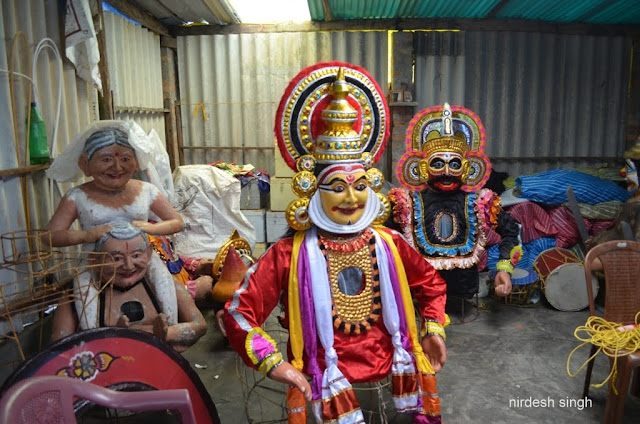 Under grey skies, the colourful houses and the temple provide relief to the largely monochromatic surroundings immersed in different hues of green. In a small hut they make masks for carnivals adding further dash of colour. 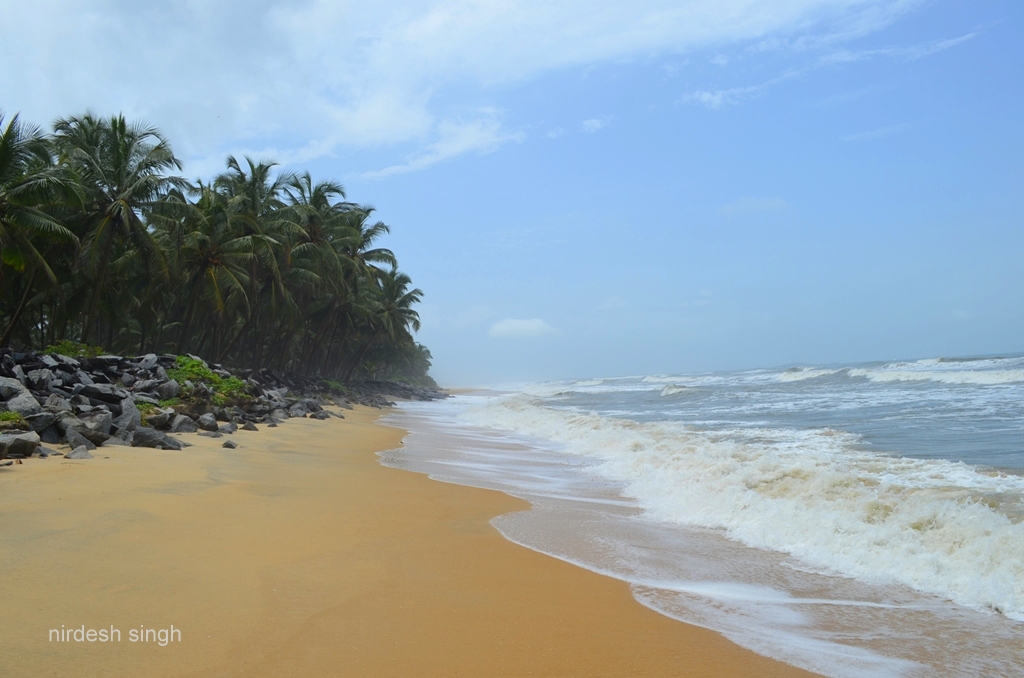 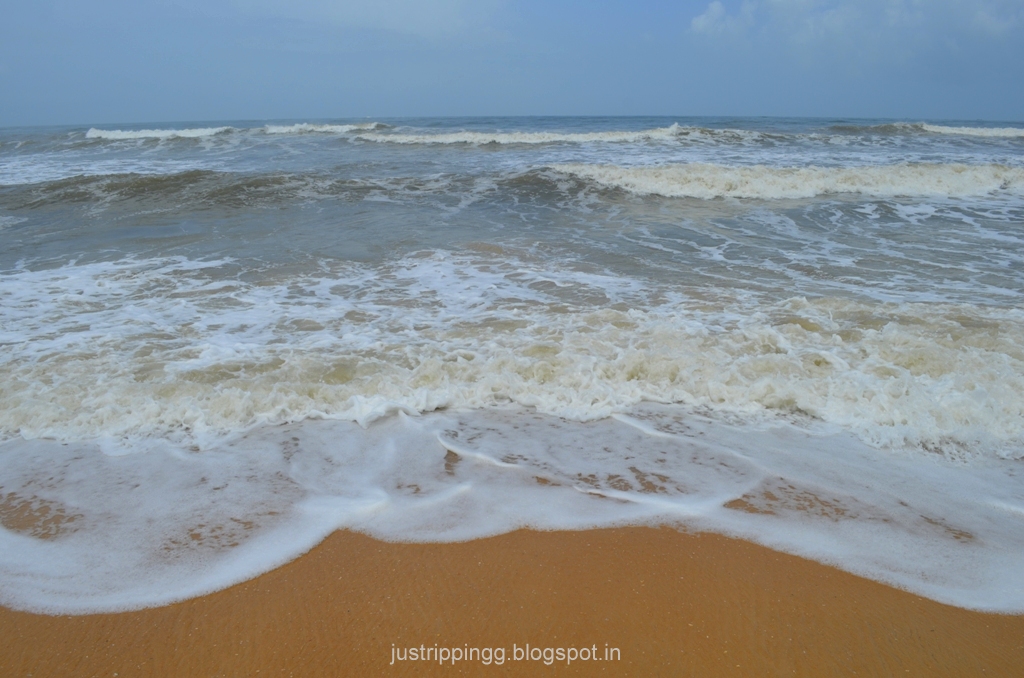 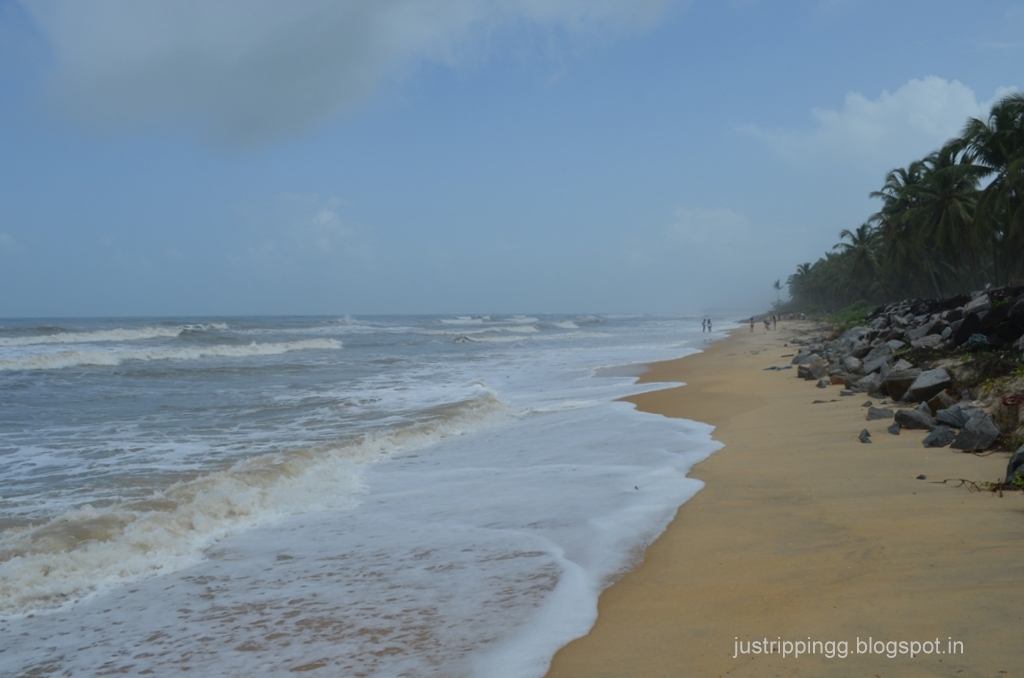 There is a quiet piece of beach just ahead that has escaped the treatment meted out by the raging waves and is relatively clean. Finally you see some tourists here. They are probably kids from the Manipal colleges enjoying their Independence Day off. 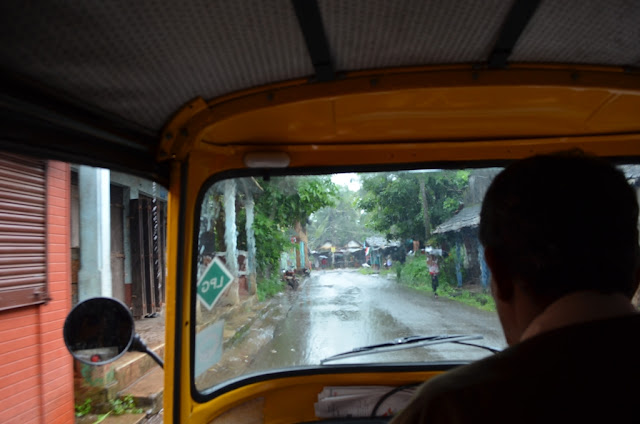 Within minutes, the skies have opened up and you can see some blue up there. Skies here in Konkan change quickly during monsoons. It could be pouring for few minutes and then the skies open up revealing blue azure skies even as the leaves glow under the sun. 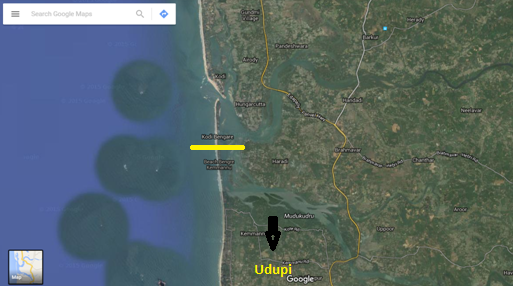 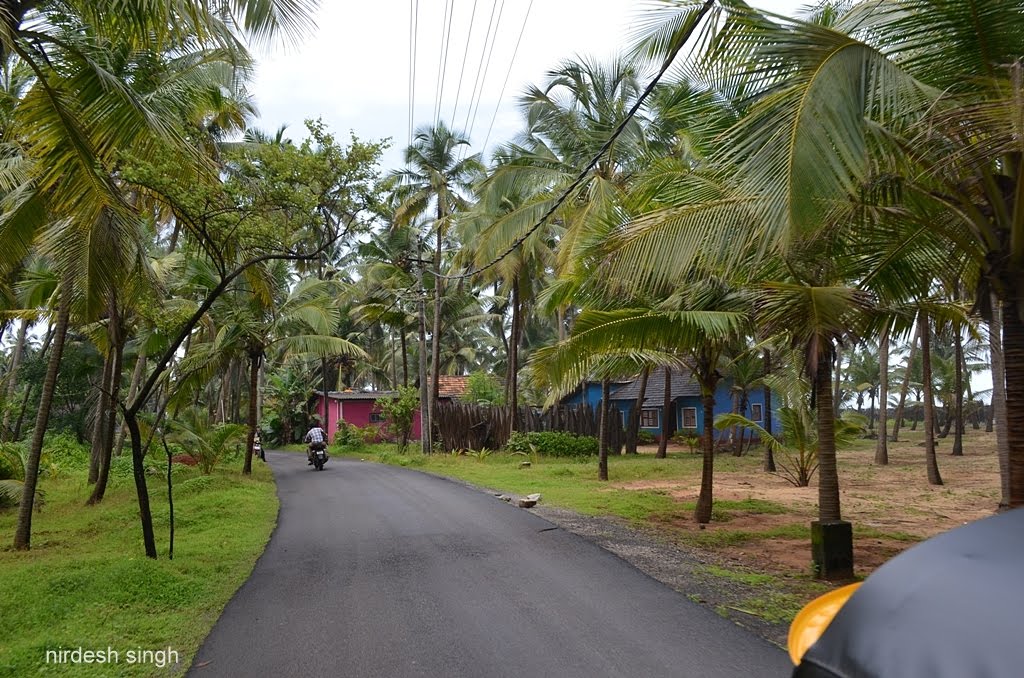 One thing you still cannot get over is the fact that even in this strip of land constantly threatened by the sea, life goes on in its own languid way. The presence of water on both sides is just incidental. There are temples and there are houses; people go about living their lives; boats lie upturned waiting for calmer waters, cattle graze and dogs play with the waves on the beach. Everything seems so normal. 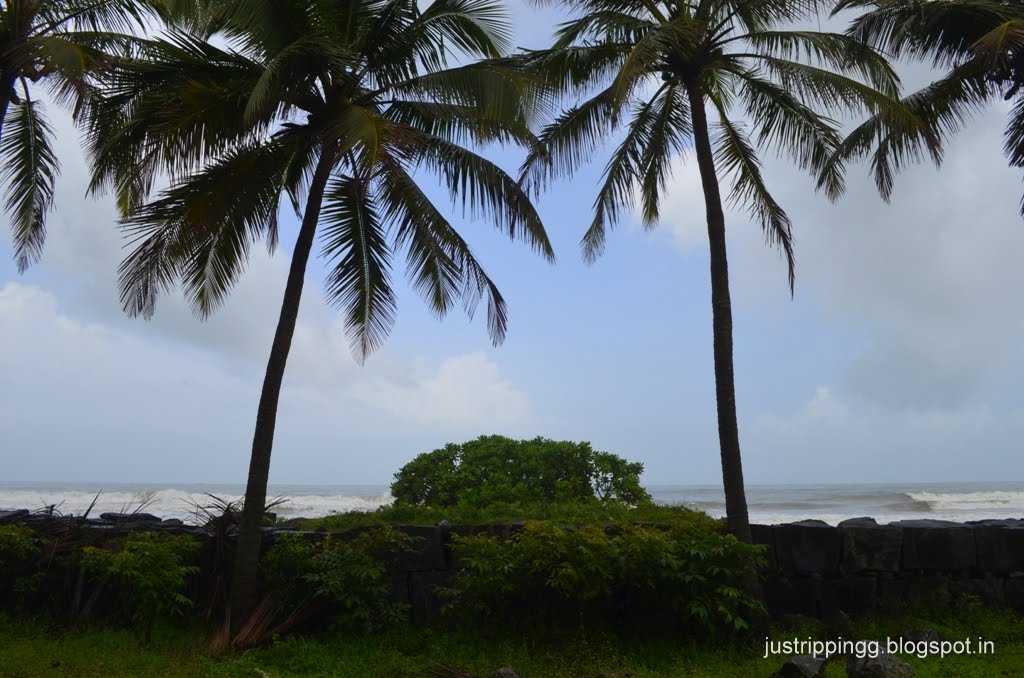 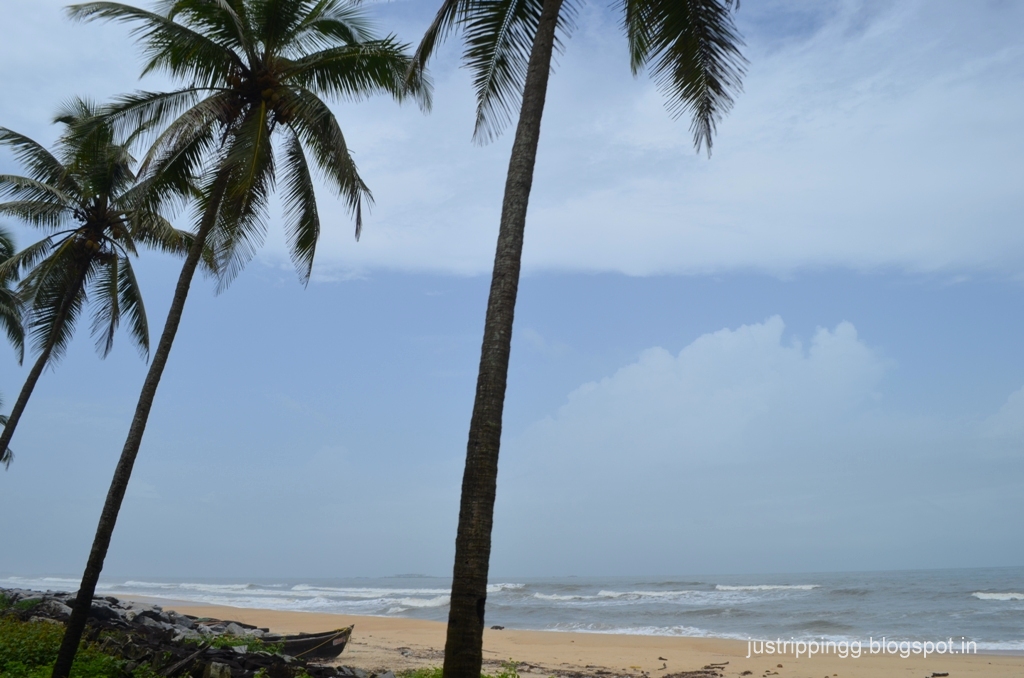 Kodi Bengare is another example how we become comfortable in the surroundings where we are born and where we grew up. We cannot think of living anywhere else. Whether it is trudging up kilometres to your house in the Garhwal mountains or taking a boat to get to Majuli, world’s biggest river island in Assam or here in Kodi Bengare, living yards away from the waves; we feel at home here. The angry waves lull the residents into the most peaceful sleep that no city can offer. 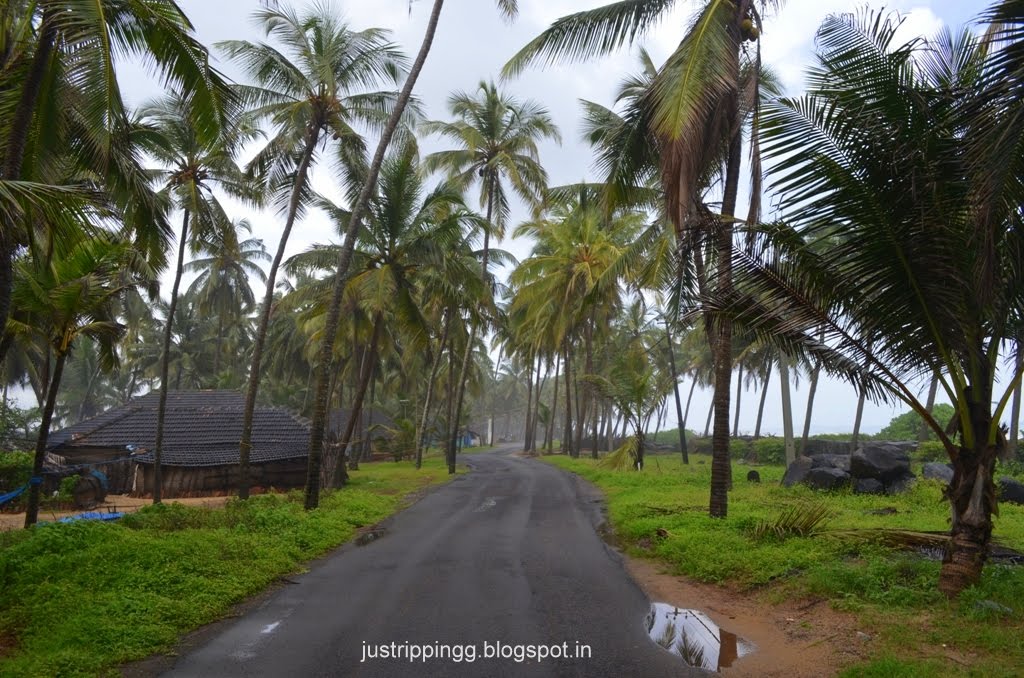 In your travels, you have seen several places where you could just settle down without a second thought. Kodi Bengare, in the lap of waves and flowing waters of Suvarna, has an irresistible pull for an itinerant to drop anchor. You could retire today and spend your remaining life here with the Western Ghats as the playground. Reluctantly, you pull yourself from your reverie. Mangalore beckons to complete your Konkan sojourn.

Getting There
Kodi Bengare is about 15 kms north of Udupi. Autorickshaw can be hired from the city to go around Kodi Bengare. You can spend an entire day here if you want the rare choice of beach on one side and the idyllic setting of gently glowing River Suvarna on the other side.

Udupi is 60 kms north of Mangalore on the west coast of Karnataka. Best way to get to Udupi is by Konkan Railways either from Mangalore or Goa. Western Ghats are best enjoyed travelling from Goa to Udupi.

A version of the story appeared in the Spectrum supplement of Deccan Herald dated 16th Aug 2016.