Along with walking the streets of Ratnagiri in the rains, sometimes you take rides in the friendly auto rickshaws here. And one of these short auto rickshaw trips brings you to another Ratnagiri surprise.

And this surprise blows you out of the monsoon waters!

Ratnagiri is hometown of Lokmanya Bal Gangadhar (1856 – 1920) Tilak. Tilak was one of the first assertive nationalist leaders of Indian Independence Movement who coined the slogan “Swaraj is my birthright, and I shall have it.” Lokmanya’s house where he was born has now been turned into a good looking museum. For a change there are signs, personnel and the complex looks well maintained and pleasing. 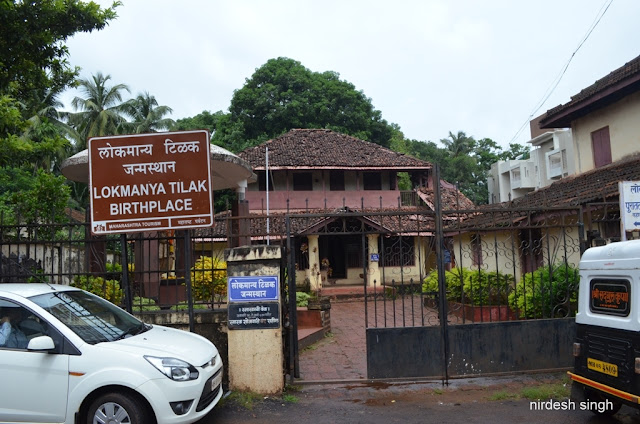 The architecture is traditional Konkani with sloping roofs and wooden elements and open spaces all around.

Inside you can see some of Tilak’s belongings along with his signature turban. Photos and newspaper clippings give an insight into his contribution to the freedom struggle. You walk around the small and pretty looking house where the kitchen is and where the family lived and the open verandahs in the front and rear and this wood stairway going up to the floor above.

Now this house unlike the Thibaw Palace has a nice vibe to it. The little house is cheerful and you can actually imagine sun streaming through the windows even as it rains outside. This house feels like home; your own little refuge in this indifferent world. Who says houses are inert walls and ceilings? Homes, houses or palaces are living beings that watch and feel. They mirror the feelings of people who inhabit them - when the inhabitants are happy they are happy and when they see suffering they suffer themselves. And while the happy and suffering people are long gone to someplace special, the walls and the mantle and the window continue to smile and cry, telling their stories who have seen it all. 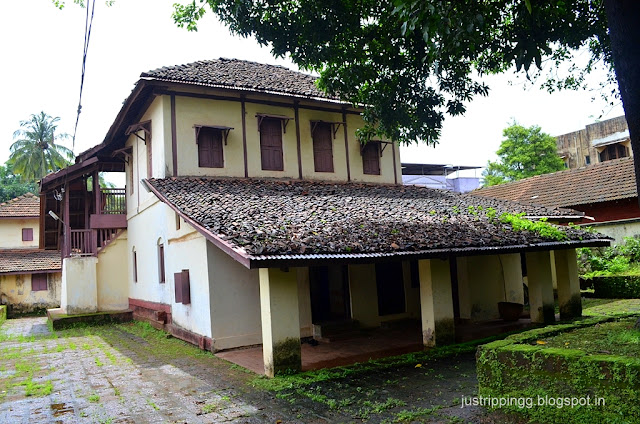 The British had named Tilak as the ‘Father of the Indian Unrest’ because of his propensity to write inflammatory articles in newspapers founded by him – ‘Mahratta’ in English and ‘Kesari’ in Marathi. In another instance, Tilak in his paper Kesari, defended the revolutionaries Khudiram Bose and Prafulla Chaki who attempted to kill the Chief Presidency Magistrate of Calcutta and called for immediate self-rule or swaraj.

British patience was running low and Tilak was arrested for sedition. In the ensuing trial, Tilak was convicted by a jury and sentenced to a jail term of six years (1908 - 1914) and sent to – hold your breath – to Mandalay! Same Mandalay capital of Burma from where the King of Burma was exiled to Ratnagiri, birth place of Tilak! And in overlapping time frames!

Tilak spent six years imprisoned in Mandalay in the company of a fellow Marathi gentleman named Kulkarni who would cook for him. It was here that Tilak composed his famous commentary on Gita called Gitarahasya (Mystery of Gita).

The British after plundering the Mandalay Palace had converted it into a garrison called Fort Dufferin. Was Tilak imprisoned here in the palace – this is something that can be looked into?

The British really had some wicked sense of humour. 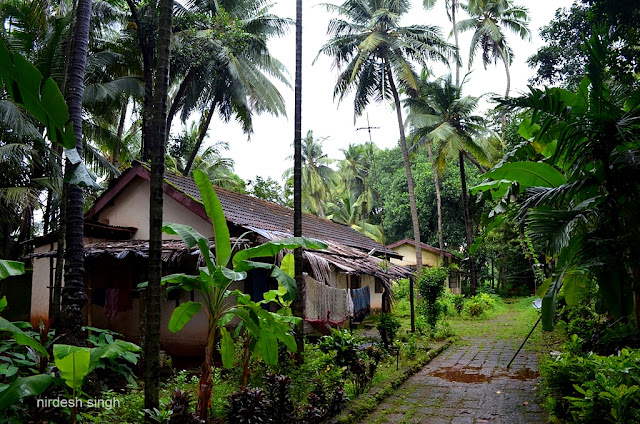 Still recovering from the Mandalay surprise you walk to the rear of the house where an endearing garden is laid out. Coconut trees create a canopy. It is calm and soothing and surreal here. You spend some time soaking it up all.

Thibaw and Tilak - two different lives intertwining inexplicably and unexpectedly in Ratnagiri and Mandalay. This is what makes history so powerful and interesting.

Surprises are coming in fast here in Ratnagiri. It is time to go visit Ratnadurg and the lighthouse.

Getting There: Ratnagiri lies on the south west coast of Maharashtra on the Mumbai-Goa highway and is well connected by trains from Mumbai. Ratnagiri is about about 350 kms from Mumbai and 300 kms from Pune. In Ratnagiri you can hire auto rickshaws to take you around the town and to the fort. The Jijamata Garden will offer you spectacular views of Arabian Sea and Bhatye Beach. Other attractions are the Ratnadurg with its Lighthouse and ThibawPalace, now turned into a museum. Take the bus to Ganpatipule Beach to see mist envelope the hills and sun create scintillating light effects on the water.

Photography is not allowed inside the house.

Related links on this blog