Tripping on the Trains – Serendipity in Guntakal and Chippagiri

Karnataka has the best looking railway stations and bus stands in the country. You were already impressed with the bus stands – colourful, clean, quiet, and no smell. Buses drive into their bays on time while announcements are made over the PA system. Helpful personnel guide you to your bus going to Davangere or Bagalkot. In UP, you can smell the bus stands and stations a mile away which helps you to zero in without asking for directions. Because of the missing crowds, stench, grime and diesel fumes, the downside in Karnataka is that you have to ask your auto driver again, who has just dropped you, to be assured that this funky looking landscaped building is actually the functional bus stand. 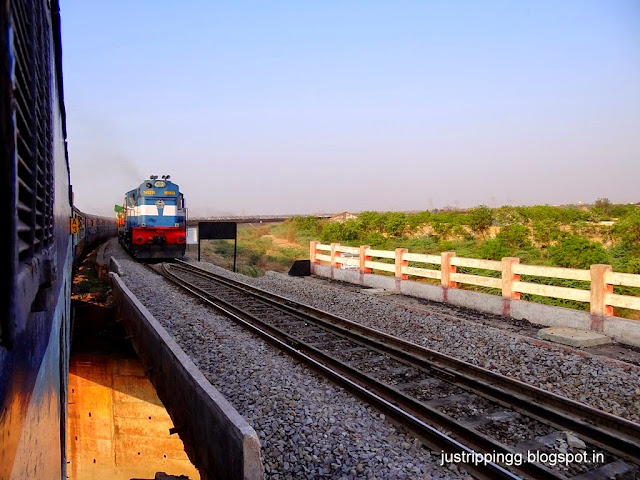 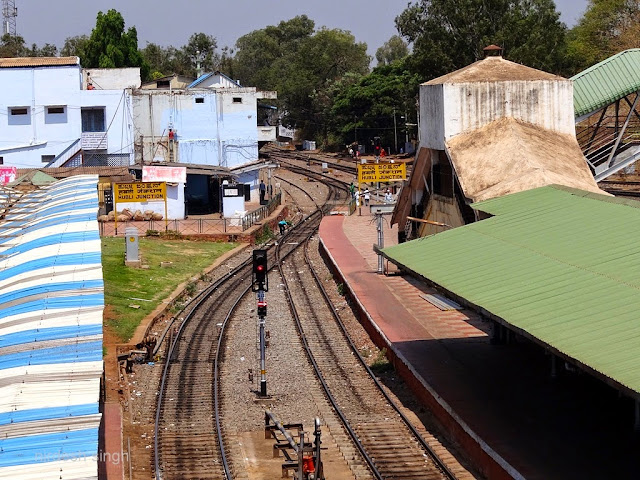 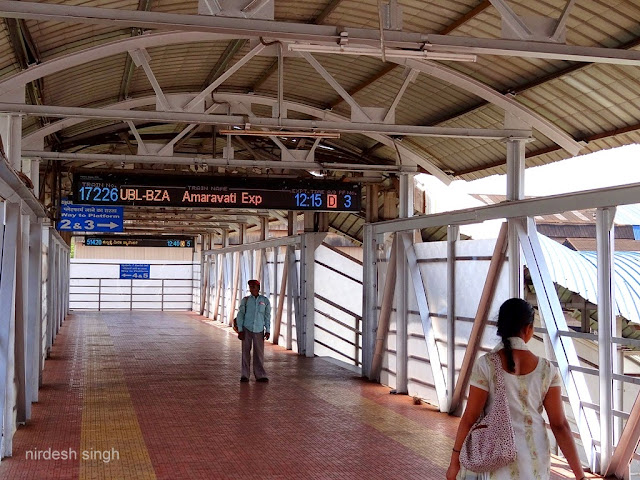 You are on your third leg of inter-state travel. After Maharashtra and Karnataka, you are taking the Amravati Express from Hubli to Kacheguda Hyderabad. Hubli Railway Station like the rest of them looks and gleams like an airport. The station building, platforms and overbridges are spotless and modern. You arrive at your platform to see an army of women wiping every window and every inch of your coach. You have never seen this happen in a train before. Outside on the granite floored platforms, passengers watch the huge LCD TV screens lounging on modern looking steel chairs. Unbelievably, yes this is the same country and same Indian Railways.


While booking tickets you just felt lucky to get a confirmed seat. You did not wonder why the train would take 16 hours to cover 620 kms and arrive in Kacheguda early next morning. At 1330 we chug out of Hubli.


A succession of stations come – Annigeri which was in news few years ago when a mass burial site was unearthed; Gadag where you went crazy temple hopping in Lakkundi & Laxmeshwar and subject for several future posts; Koppal where you could see the fort towering over the town and which you will definitely like to climb next. And then, Hospet - you love Hospet, a city which provides the launch pad to Hampi. The word Hampi fills you up with fondness and love; you have been lucky to visit Hampi so many times and still you have not had fill of the ruined Vijaynagar Empire. You need another week in Hampi before you can say you have now seen and experienced and climbed every hill here in Hampi. Next comes Bellary, a town in news for the wrong reasons; you need to visit the much heard about Bellary Fort and if lucky some prehistoric megalithic sites too.

While all this is happening, you wonder why you are the only one in your train bogie. So you walk to where the bunch of TTEs is sitting. The TTEs explain to you that few bogies of this train will be decoupled in Guntakal AP while we wait for about four hours waiting for the train coming from Bangalore before we continue our onward journey to Hyderabad. Okay so that explains the 16 hours!

Apparently, Guntakal in Anantpur district of Andhra Pradesh is a major junction where trains on Mumbai-Chennai, Margao-Vijaywada and Bengaluru-Guntakal lines intersect. Your train 17226 Amaravati Express runs from Hubli to Vijaywada. In Guntakal, few bogies are taken out, made to wait for four hours and then attached to 17604 Kacheguda Express that runs from Yesvantpur Bengaluru to Kacheguda.

FOUR HOURS of being cooped up in a stationary bogie! Your mind starts racing. One part says you have already been running for the past ten days, so forget it and get some rest. While the other, more sensible part says, let us go out in the town for an adventure. Google and friends chip in with some tidbits. You will not have much of daylight time to explore. The train reaches Guntakal at 1835. You will hardly have an hour of twilight to see what you can. Reconfirming from the TTEs and the net, you are sure that yes, you DO have four hours in Guntakal - you don’t want to be marooned in the middle of nowhere. The failsafe plan is ready. Lets rock n roll!

Even before the train comes to a halt you are wheeling towards the exit where the parcel office is. On the way you see your train leaving – you just hope you are not making a mistake. The suitcase is deposited in the parcel van. Outside, you grab a vada pao. Adventures need a filled up tank. Now is the hard part – negotiating with an autorickshaw. Thankfully, the place is organized and the uniformed autowallas seem reasonable. You announce you have couple of hours to see the town and go visit Chippagiri about ten kms north-west. Deal is made and you are off. The plan is working like a Swiss watch.


On the way to Chippagiri you swing by a Church called Our Lady of Health Shrine. In the golden light the church looks pretty. The name seemed novel. You don’t have time to inquire about the origin of name. You gotta run.

Your reverie is broken as you drive into Chippagiri. No photos were available on the net. All you know is that there are some temples in the village. You don’t know what to expect - maybe all the place has is a few modern temples. We drive into the village square and wow, you have hit the target blind eyed. There are temples all around!

It is evening and time for people to hang out in the square. For a moment it seems you have stepped back into time and into the Vijanagar Empire. Trains and cities and the world are far away. Here it is just the quite murmur of village life. It is surreal. Kids go running, while the old men look at this guy who has suddenly driven into their world and is shuffling around with a camera. You wished you could just sit here with them without talking and just nodding and smiling. Okay, you have begun to experience serendipity now.

Prima facie, it seems the village grew around the temples. Looking at the architecture of temples and the stone used, it seems you have been transported back to Hampi. Chippagiri is a miniature Hampi - same grey granite and same temple architecture. 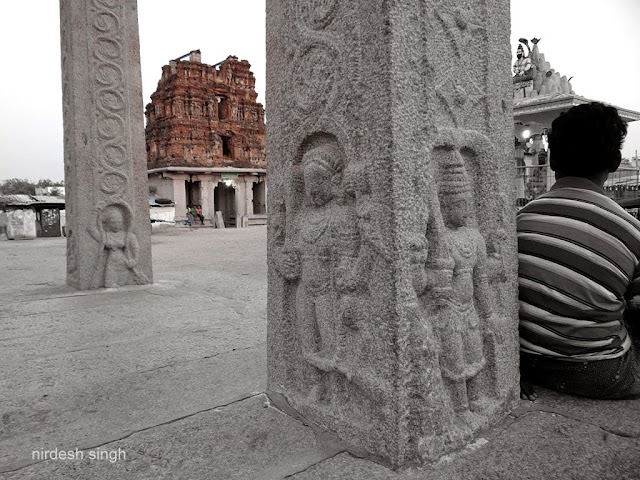 However Chippagiri has something grand that you did not see in Hampi. There are two very tall Dvajastambhs in the village square. Taking advantage of their height, the electricity department has installed lights on them. Between the two stambhs there is a very tall four pillared canopy. This is the tallest canopy you have seen in Vijaynagar area. So the local architect introduced some new architectural elements here. A covered chariot is parked as it waits to carry the Lord.


On the eastern edge of the square is the west facing Sri Lakshmi Chenna Kesava Temple – Chennakesav means Beautiful Lord Vishnu. The temple is standard Hampi construction - granite base and gopurum made of brick with stucco images. The stucco images are largely eroded. 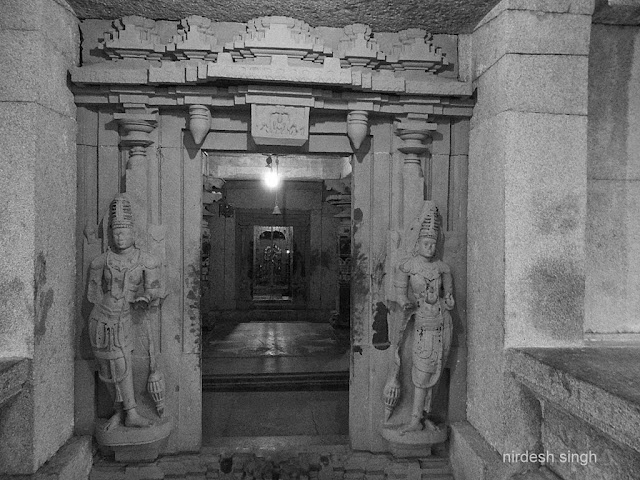 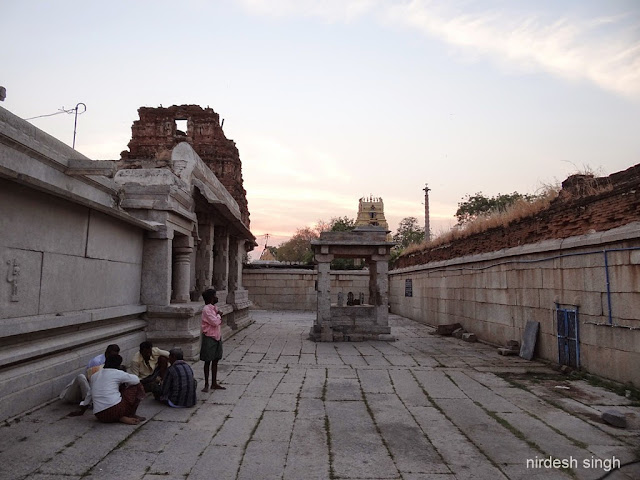 The square mahamandap is built in the centre with a circumambulatory path all around within the temple enclosure. Minor mandaps with deities are built all around the mahamandap. The granite pillars carry the usual Hampi relief iconography. 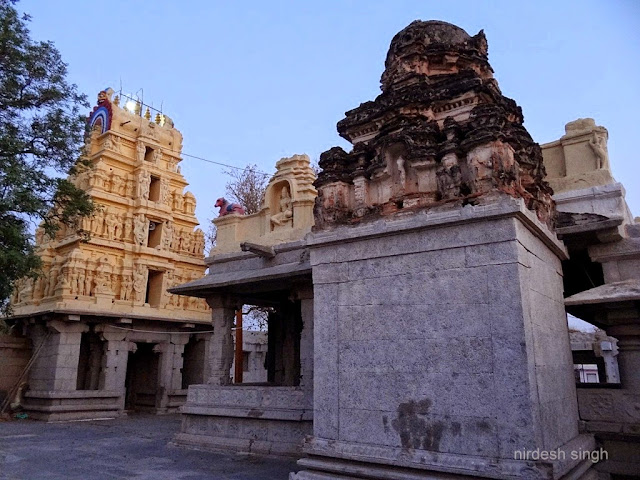 Coming out you enter the Sri Bhogeswara Swamy Temple in the west dedicated to Lord Shiv. Now this temple has been largely restored with the gopuram painted over. Images on the shikhar are painted in different colours. The enclosure walls are interestingly crenellated with relief images. Here too secondary shrines embellish the complex.

Another interesting feature is the presence of three Nandis just outside the girbhgriha - not sure if they are extant or were brought in later. Outside there are the standard Nag Stones. You come out of the temple looking out to the village square.

It is almost dark now. Lights are burning bright in the village square. Just beyond the village in the fading light you can see the hill with a Fort, Jain Temple and Gunpowder Magazine. You will come back some day to climb the hill. Finally you focus your attention on the kids who showed you around. You joke with them, take some photos and then bid them goodbye.

Chippagiri was reported to be a part of Chalukya Kingdom when King Taila ruled. Later the area formed part of the mighty Vijaynagar Empire. The low fortified hill overlooking the village had some prehistoric settlements and some paintings can be seen.

It is time to go see a temple in Guntakal town. In the Kasapuram area, there is a lit up temple dedicated to Lord Hanuman called Anjaneya Swamy Temple. The temple looks modern unless it is totally restored. You pay obeisance to Hanumanji and spend a few quite moments before walking back to your autorickshaw. 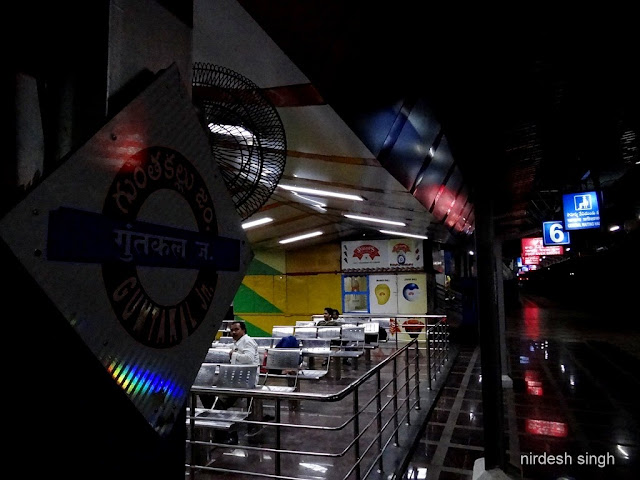 Night has fallen. Nights in small towns are inky dark and deafeningly quite. They are soothing and unnerving at the same time. You drive back to Guntakal Railway Station. The lights make it look inviting. Now that you notice, the station is as good looking as the Karnataka ones. The platforms look like mall plazas. Chennai Express waits at one of the platforms. You check, but no; Meenamma aint on it.

Soon the Kacheguda Express arrives from Bangalore. Your orphaned bogie finds a foster home in a new family of bogies and you reclaim your berth. It has been a perfect evening. So far most of your travels were planned, in what, maybe a day in advance. Today you planned in real time in a running train and while usually a car or auto waited as you hopped and skipped; today a train waited on you. These few hours were serendipitous.


Kacheguda station looks beautiful in the early morning light. Few more hours and you will be hitting the beaches in Machilipatnam. It does not get better than this. In the meantime as the serendipity streak continues, you intend to keep running.

Getting There – Guntakal in Anantapur district of Andhra Pradesh is about 50 kms from Bellary across the border in Karnataka. Guntakal is a major railway junction having connectivity with Hubli, Bangalore, Hyderabad and Vijaywada. Chippagiri is about 10 kms north-west of Guntakal. You can hire an autorickshaw from Guntakal railway station to visit Chippagiri to see a slice of Hampi in AP!