Mandav - A Walk in Ancient Mandu

Association of Mandu with its ancient avatar of Mandav begins to fall into place on your third trip to Mandu. The magnificent hill fortress of Mandu probably existed as early as sixth century and was then called Mandapa-Durga. Later Mandu formed part of kingdom of Gurjar-Pratihars of Kannauj and then passed into hands of Parmars. Mandu is possibly corrupted form of Mandav or Mandavgarh. Most of the buildings that you see across the town are medieval and were built during the Sultanate period. But if you get off the tourist route, you will be rewarded with the vestiges of the ancient Mandapa-Durga. 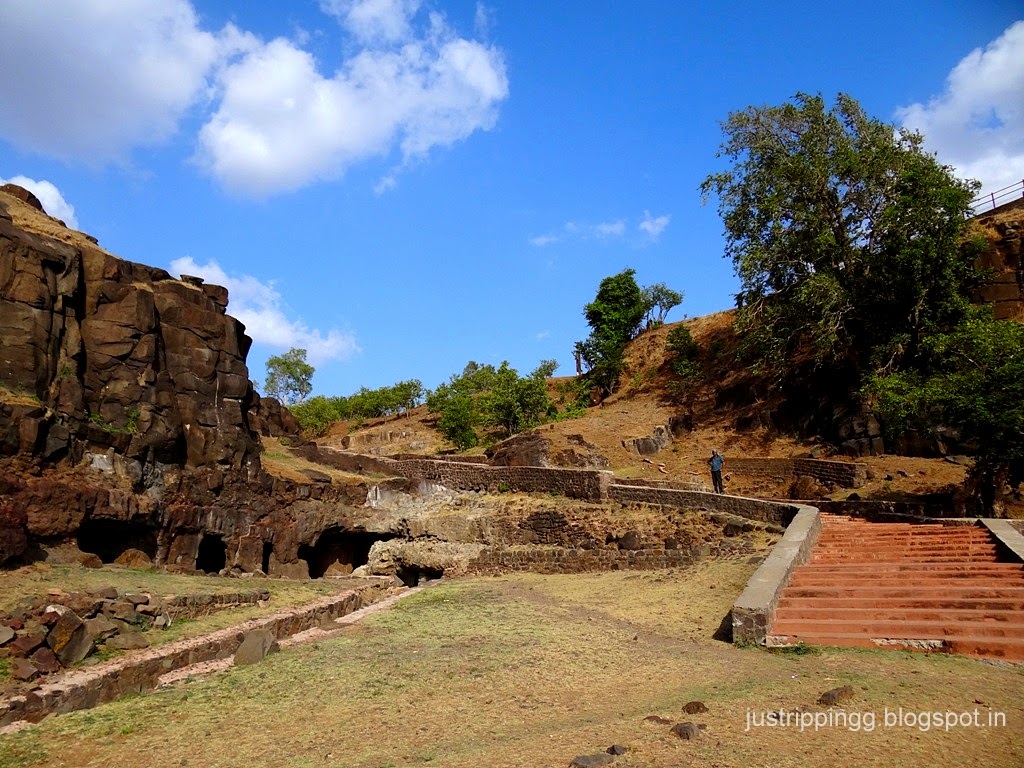 Apart from the fortifications and gateways around the hill originally built by the Hindu rulers that may have been further fortified in the later years, there are a number of minor structures spread across the hill that takes you back in time to Mandav. Let us go around these little known places in Mandu.

Chappan Mahal Museum
On the south of Jami Masjid, a track takes you to the Chappan Mahal complex. The complex has an outer boundary wall and inner walled compound. The good work by MP Tourism along with ASI continues here. The MP Tourism sign says the site has been developed as part of Central Government project to promote Mandu as tourism destination.

The walled compound consists of a regular looking tomb, a number of which you can see across Mandu. There is a relatively new whitewashed structure next to it. This structure is probably a Kothi. On the north of the Kothi is the Baoli with green tinged water. The Baoli was built in 16th century. South of the tomb there is a Baradari like structure with chambers. The Baradari probably housed the attendants.

The whitewashed structure to the west of the tomb was built by Dhar King. It is supposed to be Rest House or Warne’s Kothi. Other accounts say that the structure housed the Dhar province’s post office that serviced fifty six villages and therefore the name Chappan Mahal. Yet another version says that it was in Vikram era 1956 (1899 AD), the rulers of Dhar started conservation work at the monument as relief work for the drought affected local population - Hence the name 56 or Chappan Mahal. Exactly hundred years later, the property was donated by the Royal Family to the Collector of Dhar for setting up the museum. The four galleries of the museum depict history of Dhar from Stone Age to twentieth century. 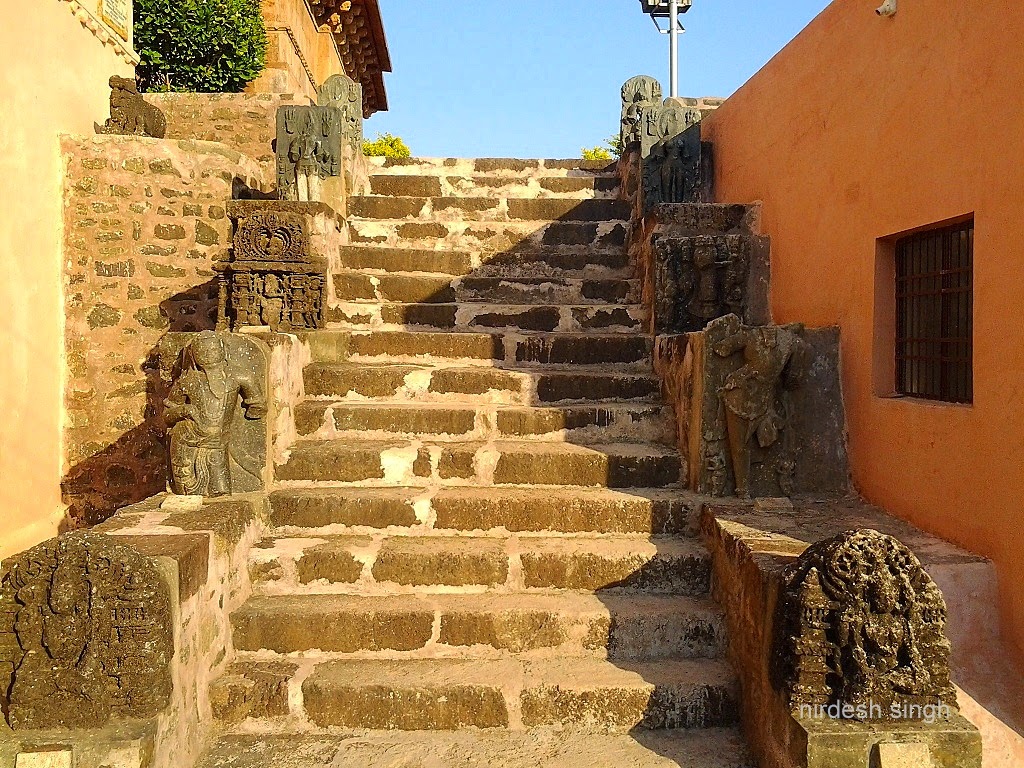 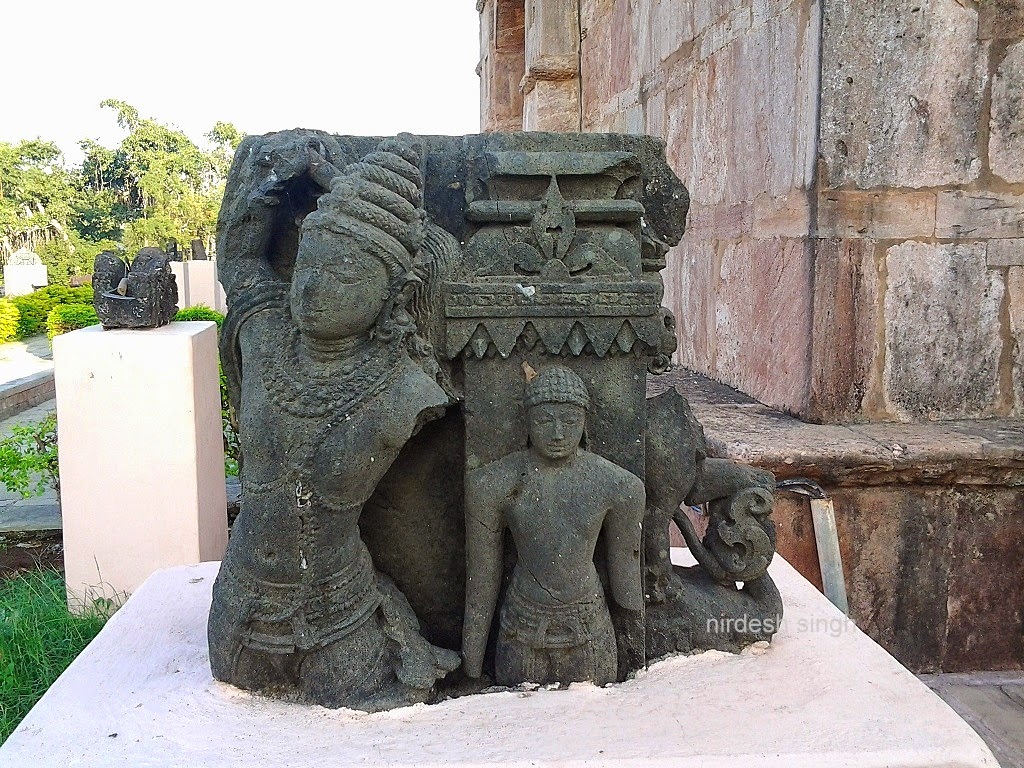 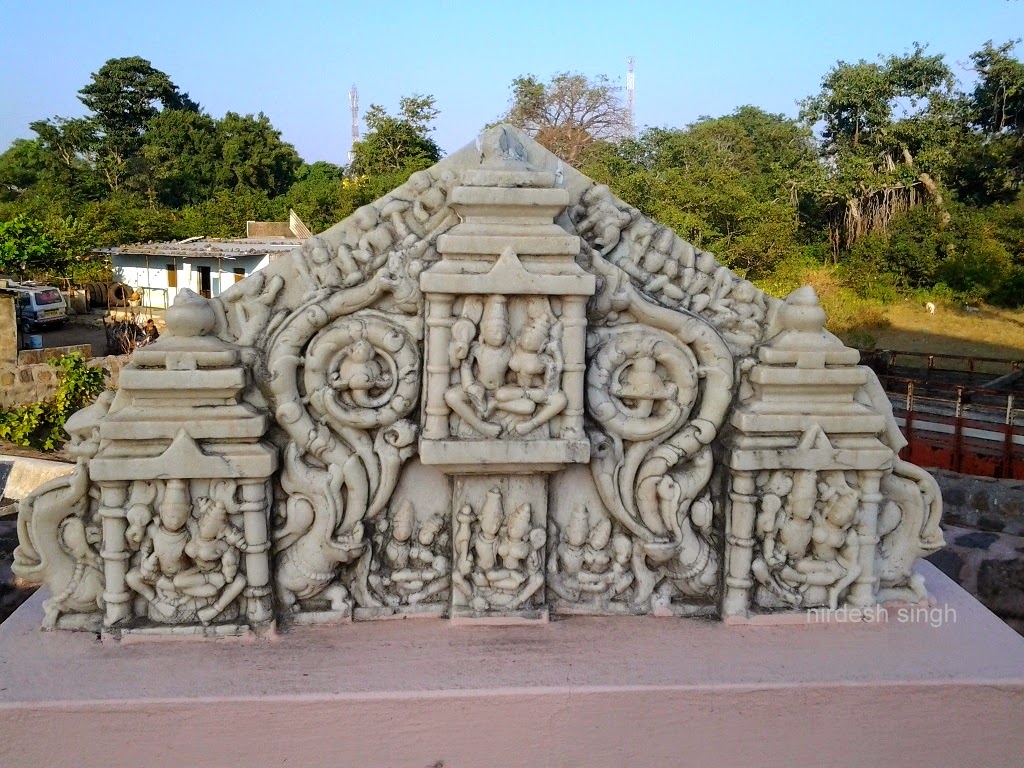 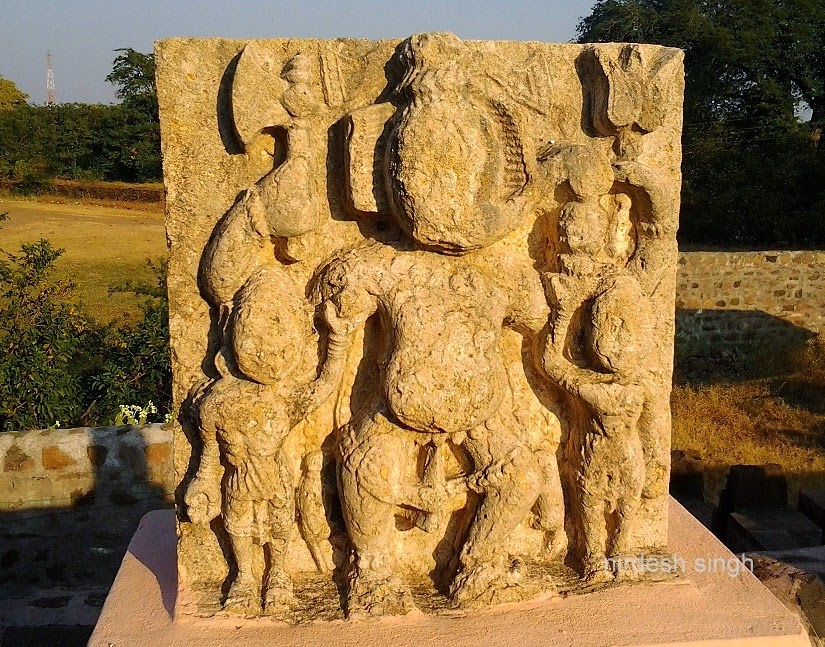 The compound gate leads you to steps that take you to the high platform on which the Tomb and Warne’s Kothi are built. Both sides of the steps have images from temples that existed in Mandu and Dhar before the arrival of Sultanate. Up on the platform, the area around the structures has been landscaped. Pedestals with images are installed all around as usually seen in museum complexes across India. This is the first time you are seeing Hindu images in Mandu and is quite a revelation.

The tomb is simple square construction with a dome rising on top. A chajja goes around the walls. The entrance is on the south side. As you step inside you are surprised to see the interiors turned into a museum. The lower part of the walls has been painted over. Though mercifully the original blue tiles decorating the drum of the dome have been left unmolested.


A number of statues, sculptures and other paraphernalia are seen exhibited and labelled neatly. Shesashai Vishnu takes the place of pride in the centre along with Gautam Buddha. Most sculptures like Parvati, Brahmi, Aindri, and Trivikram belong to the 12th century. The museum also has collection of coins, scriptures and pottery fragments found during excavations in the region.
The images possibly were excavated by ASI in several mounds throughout Mandu and Dhar while some survived the dismantling of the temples. Most of the temple stone material was used in building of the later Sultanate buildings that we see today in Mandu. This is a familiar pattern that you have seen in Delhi, Champaner and Ujjain. 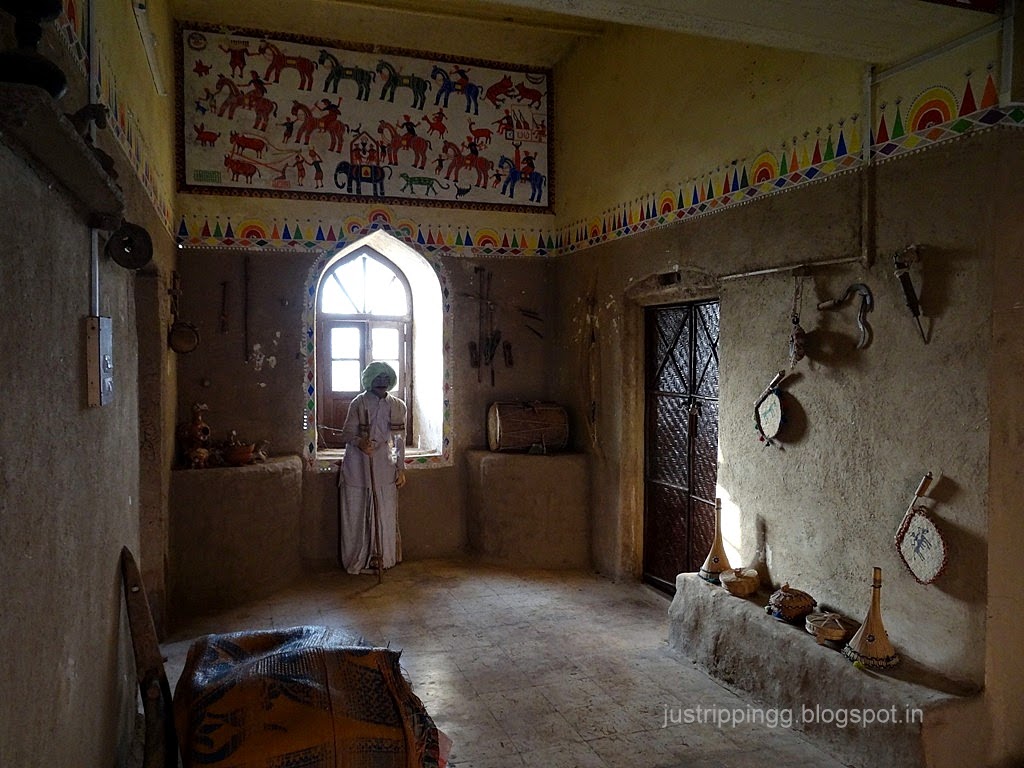 So while the Chappan Mahal houses archaeological antiquities, the Rest House or Warne’s Kothi exhibits tribal cultural artefacts. Scenes from a tribal village are shown with inhabitants going around with their daily lives.

Though the idea of usurping a tomb to set up a museum is not exactly laudable, but it is a low cost model and quite novel. The museum opened up a new window to Mandu and now it is time to explore more ancient connections with Mandav.


As you make your way from the Gadi Gate towards the village, you see the ruins of Foota Mandir or Ruined Temple on the right. The structure was initially built during the Parmar Dynasty in the 12th century.


There are remains of a small temple with a girbhgriha but no deity. The roof has collapsed while the walls built of blocks of stone survive. The structure was rebuilt and expanded in the 14th century during the Sultanate period. In the rear, built on a high plinth is another structure. The western wall has three niches built of dressed red sandstone. Traces of a baodi are seen in the rear. This is the only temple or part of an ancient temple that you can remember seeing in-situ here in Mandu while all others have seemingly disappeared from plain sight.


On the west of Hoshang Shah Tomb, a long colonnaded verandah stretches into the distance. This part of the tomb complex is called Dharamshala probably due to its Hindu architectural elements. The S shaped brackets that almost look like an elephant trumpeting look especially beautiful. Parallel to the colonnade, another passage but without supporting pillars runs across the western boundary of the tomb.


The passages lead you to an apartment with few dark rooms at the south-west corner. Familiar smell hits you and you can hear squeaks inside. Of course the chances of being hit by a bat in a dark room full of bats is, well, zero. You step inside the room. As your eyes become accustomed to the dark, you can make out outlines of broken stone fragments scattered across the floor. In the neighboring room with sunlight filtering in, you can clearly see that the fragments have come from temples. So the temples have not completely disappeared here in Mandu.


The story repeats itself. Most of these temples probably belonged to the Parmar era. Sultans came, demolished the temples and used most of the material in the new buildings. Hindola Mahal and Dilawar Khan’s mosque are reportedly built from temple materials. Architectural members like carved amalaks, shikhars, lintels and pillars can be seen here in the pile. While some of the unused broken architectural members of the temples are stored here in Dharamshala, the surviving images are housed in Chappan Mahal Museum. 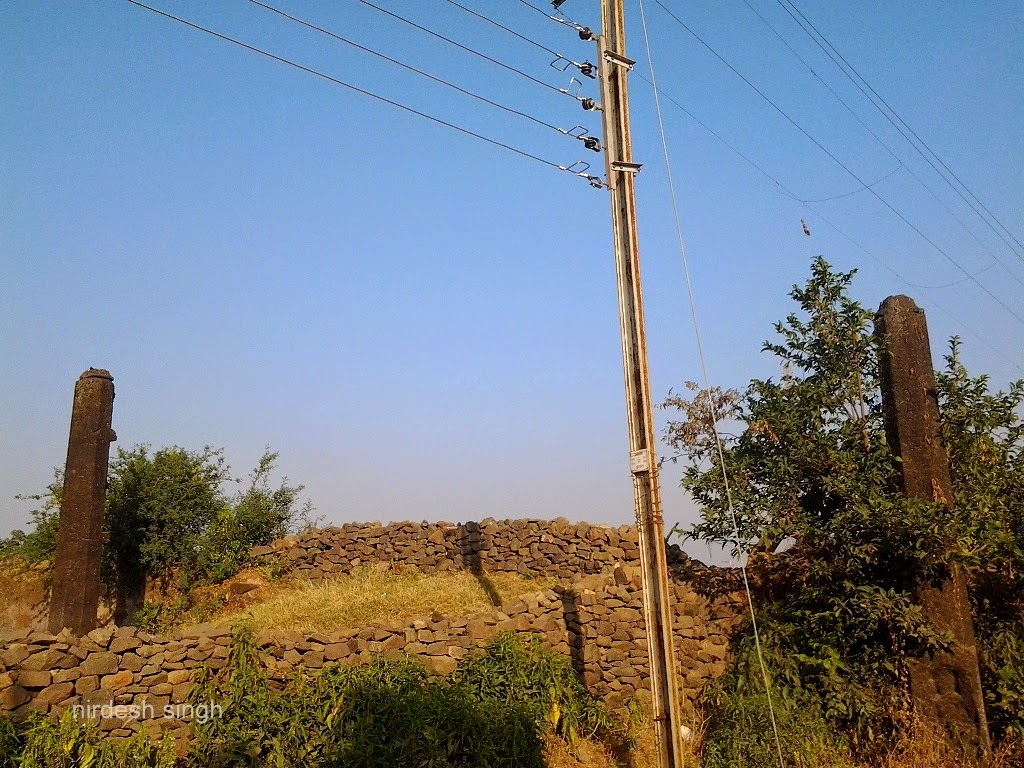 On the way to the summer palace Lal Mahal which lies outside the village on the east, you are surprised to see these three pillars that look like Deep Stambhs. Two are erected on either side of the road. The third one is off the road on the left. You are not sure if the pillars are in-situ. And if they are then the associated temples are long gone; the material probably used up in the later buildings of Mandu.

In the Jahaz Mahal Complex, there is a baoli called Ancient Hindu Baodi. We are not sure how old the baoli is and whether there was a temple nearby. The baodi still has water but is not as elaborate as the other baolis here like the Champa Baoli few yards away.

Before you enter the first gateways into Mandu, on the right a narrow path leads to interestingly named Andha and Andhi Tombs. The ground drops just before you start climbing the steps to the tombs. Below is circular tank and next to it a bigger square tank. The circular tank is filled with water while the other tank is dry.

Steps lead down from the square tank to a group of caves excavated in the vertical rock face. A gate leads into an apartment with several caves on all sides. You cannot step inside as water fills up the courtyard. A roughly hewn monolithic pillar is present in the centre of courtyard.

The front cave has a shivling. The shivling could be a later addition as the caves are believed to be Buddhist. The water source is a mystery. Even as you stand in the doorway, water can be seen dripping from the top. This is strange. The square tank which is almost on top of the caves is dry. So where is the water coming from? Maybe there are some water channels running through the rock that bring water from an unseen reservoir inside the rock. You are not sure if these are the seven caves as the name indicates or whether there are more caves in the rock face beyond.


As you walk from Hoshang Shah Tomb towards Jahaz Mahal Complex, a sign on the left indicates Lohani Caves, Lohani Gate and Sunset Point. ASI has done great job here in Mandu. Recently built steps take you down into a valley.
Lohani Caves is a group of small caves probably excavated in the 11th or 12th century during the Parmar dynasty. The caves are quite basic with bare walls and no noticeable carvings inside. As you duck into the caves look out for bats and wasps. In front of the caves is a cistern filled with green water. During rains, water flows into the rock cut cistern from the hill above. The caves probably housed Shiv Jogis.


The caves were filled with debris and when cleared unearthed sculptures and carvings that are now seen in the dark room in the Dharamshala and Chappan Mahal Museum.
It is in this area, that a number of Shiv Temples were built. Some plinths were seen by ASI during the clearing up operations. At the base of the steps an orphaned monolithic pillar can be seen with the associated temple missing. Overlooking the valley, the lone sentinel pillar has seen Parmars, Delhi Sultanate, Malwa Sultanate, Mughals, and Marathas come and go.  This is what you like about heritage. The connections of long ago are made in an instant; compressing thousands of years into fleeting moments. And those fleeting moments gives you the heady feeling that makes the mad rush, breathless climb and rumbling walk all worth it.

Below just beyond the edge there is a sheer drop into the valley. It is this fascinating topography that provides natural defense to Mandu. Some remains of the possible Lohani Gate can be seen below. Time stops and all becomes quite. Up, behind you, Sunset Point can be seen. The scene of setting sun over the valley and hills must be breathtaking. You will come back for the sunset some day - a day when you will have few hours to spend with the lonely pillar. You are sure the pillar and the itinerant visitor will have many stories to share.

Related Links on this Blog: