There are two ways of getting to Anegundi. One is by motorized boat that takes you from Hampi end of Tungabhadra just beyond the Vijaynagar toll gate of Talarighatta to the northern bank at Talvar Gatta in Anegundi. If you are more adventurous, then a white knuckle ride on floating contraptions called coracles will supply you with the right dose of adrenaline. They say while elsewhere humans have moved from wooden boats to steamers and to cruise ships, the coracles here have steadfastly refused to evolve. They still look the way they did when Bukka and Harihar took a ride shifting their capital from Anegundi to Hampi – circular and made of cane; while in the past they were covered with leather, now they are covered by plastic sheet. Portuguese traveler Dominoes Paes who visited Vijaynagara in 16th century would be glad to see the same vintage coracles that he hitched ride on about 600 years ago. 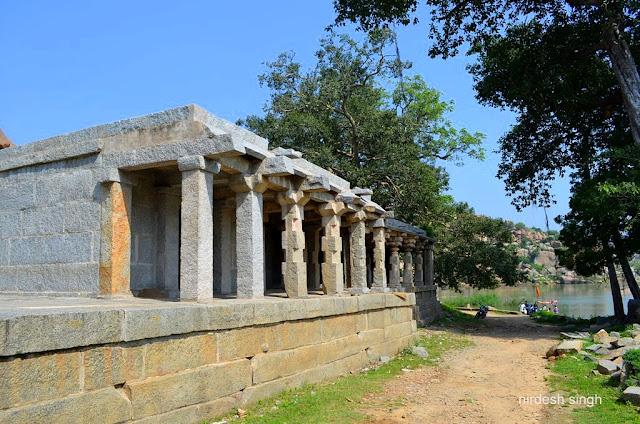 To kill Paes’s nostalgia buzz, some people in the government had the brainwave to construct a bridge over the river to connect Hampi with Anegundi. The bridge collapsed in 2009 killing several construction workers. The work thankfully seems to be suspended. You would hate the sight of the bridge threatening the 'visual integrity' of the UNESCO site and trucks barreling down ending the innocence of an incredible place with the unbeatable combination of built heritage in the awesome natural setting of lush fields, granite boulders and the mighty Tungabhadra.


There is another way to get to Anegundi for wimps like you whose legs start shaking the moment they see water below their feet. Anegundi is a pleasant drive of about 15 kms from Gangavathi taluk centre. The scene is to die for - lush green paddy fields, swaying coconut trees, and the backdrop of loose granite boulders piled high glowing in the afternoon sun interspersed with occasional sights of lonely mantapas, a Hampi signature structure. Some mantapas sit by road, some sit high on the boulders. 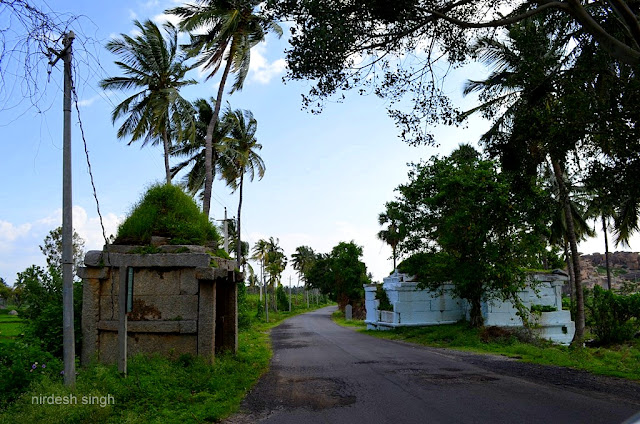 Anegundi’s arrival is announced as the road punches through successive fortifications of wall. These rings of walls go over the boulders and hills to provide protection to Anegundi transforming it into a citadel that includes a fort high up there. More lonely mantapas that could have served as check posts still stand guard by the road.


The road leads into the village with the main gate looming ahead. Before entering Anegundi you want to see few attractions around the village.

You bypass the village and come down south to the northern banks of Tungabhadra at Talvar Gatta. A track leads down to the jetty where people take the boat to Hampi. Since the river is full, the coracles take nap on the rocks. You are already thinking – maybe you can start an app based coracle ferry service over the Tungabhadra. The fortification walls of the old capital come down from the boulders to your right and the left. The walls look the same that you have encountered across Hampi – blocks of granite stacked high with no discernible mortar used. A herder nonchalantly walks down the wall. A bike rider awaits his turn as the boat comes in from Hampi side disgorging its load of passengers and motor bikes. Nandi in a small mantapa benignly looks over this view. You can’t see the associated Shiv temple. The Nandi definitely came just for the view.


On your left is a two storied structure called Talvar Gatta or the Sword Gate. This was one of the main gates into Anegundi and probably served as an entry gate, check post and tax collection point. Guards were probably housed on the first floor.  Looking from the south side, the structure on the first floor has interesting arches and + shaped slits. Just beyond is a small temple submerged in water. You can see some deities inside.

You step into the boat to admire the setting. A setting you can never get tired of – Tungabhadra river, golden granite boulders and cool breeze. Yes the Nandi in the mantap came to admire the view too. This right here is the microcosm of this almost forgotten, laid back Anegundi. Except for the boat with Yamaha outboard motor and the vestiges of the collapsed bridge left hanging in the air, you might as well have stepped back into the 15thcentury. You have fallen in love with Hampi and Anegundi. Back home, reminiscing about Hampi is your favourite past time. You go through your collection of Hampi photos, books and maps reliving the moments. You can spend a part of your life in this utopian setting.


Anegundi is a small village in Gangavathi taluk of Koppal district in Karnataka. Belying its size, Anegundi straddles a long history from pre-historic era to Ashok and to Vijaynagar. Human habitation here is known to have existed for at least 3000 years. Around Anegundi there are several prehistoric rock shelters, some with cave paintings. One such site is perched high on a hill and the other is a group of caves called Onake Kindi (both subjects for future posts). Outside the village of Hirebenekal, about 12 kms to the west of Anegondi, there is a megalithic burial site called Mourya Mane (on wishlist). And then there is the Anegundi Fort, assorted temples and the ultimate surprise called Sublime Sanapur! Two Ashokan edicts have been found in Koppal which shows Anegundi was part of Ashok’s kingdom in 3rd century BC. Later, Satavahanas, Kadambas, Chalukyas, Rashtrakutas, Delhi Sultanate, Vijaynagar and Bahmanis claimed Anegundi. Local line of rajas claiming descent from the Vijaynagar emperors still lives in Anegundi.
As narrated in Ramayana, Anegundi is the site of mythical Kishkindha where the drama between Vaali the king of Kishkindha or Kingdom of Vaanars and his brother Sugreev was played out. Hanuman was Sugreev’s Chief Minister. In the aftermath of Sita’s abduction by Raavan, Ram and Lakshman find themselves in the area around Anegundi. When Ram and Lakshman cut off the arms of an ugly monster called Kabandha, the barrel shaped monster was freed from his curse of Indra and before ascending to the celestial word, he advised Ram to go to the beautiful banks of Pampa and look for Sugreev who lived on Rishyamooka Hill. By gaining friendship of Sugreev, who has been driven out of the kingdom by Vaali, Ram can succeed in bringing Sita back. 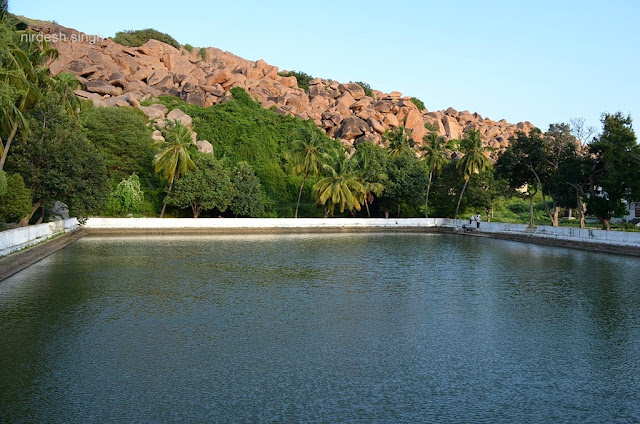 Little beyond Anegundi on the road towards Hospet, on the left, you come to a water tank or Pushkarni known as Pampa Sarovar. The sarovar takes its name from Pampa, the name of local goddess consort of Virupaksha or Shiv. It is believed Pampa Sarovar is one of the five holy sarovars created by Brahm where Shiv and Parvati are worshipped. The other four are Mansarovar in Tibet, Bindu Sarovar and Narayan Sarovar in Gujarat and Pushkar in Rajasthan. This is the second time you are here. Last time the tank was empty and being desilted. This time around the tank is filled to the brim. The monsoons have been bountiful this year. Ram and Lakshman are believed to have bathed here.
Here in the lovely region of Pampa, Ram and Lakshman visit the ashram of aged sanyasini, Sabari, a woman of forest tribe, who was the disciple of Rishi Matanga. When saint Matanga departed, Sabari too wanted to die, but the Rishi advised her to wait here for the darshan of Ram, an incarnation of Vishnu.


On the banks of Pampa, one of the most popular Ramayan episode was played out. Sabari feeds bers or wild berries to Ram after tasting the berries to ensure they were sweet. Ram remarks that he had never eaten such sweet berries. The princes were shown around the Matanga ashram. Then taking their leave, Sabari kindled a fire and entered heaven to reunite with her guru.


Overlooking the Pampa Sarovar is the Srilakshmi Temple. Next to the temple a sign indicates the way to Sabari Ashram and Ram Paduka (Feet). More than anything the ashram looks like a cave with a small platform indicating Ram’s Feet. This is the closest you have come physically toRamayan and Ram. Nasik also has several places associated with Ramayan; but there it is crowded and commercilaized. Here in Anegundi, it is intimate. As you duck into the low cave created by a cavity among boulders, it does feel surreal. You can actually see the old and withered devoted Sabari tasting and handing out sweet berries to Lord Ram. 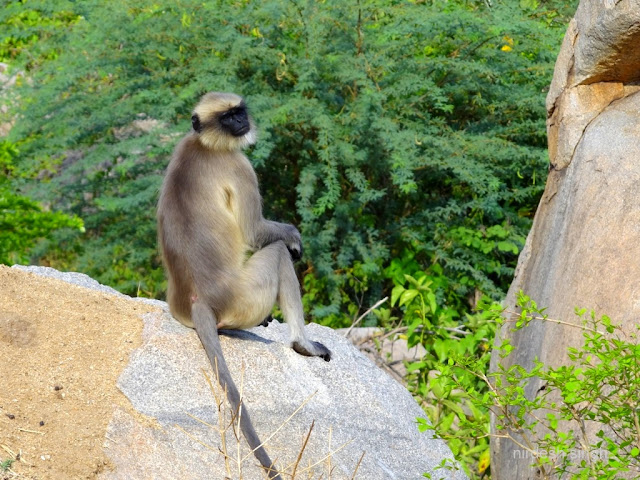 Pampa Sarovar indeed is a beautiful setting of river just beyond; rippling waters of sarovar, rising boulder hills, and monkeys all around; yes this is the place where Ram and Lakshman met Sabari and Sugreev and Hanuman. This by no imagination is a myth.
Coming back to the road, a little distance away to the west, is the Anjanadri or Anjaneya Hill. Lord Hanuman is believed to have been born here. Anjaneya Hill is the place to catch the sunset over Hampi (on your wish list). Steps built on the hill takes you to the hilltop modern Anjaneyi Temple. The steps, painted white as they curve around the boulders, are visible across Hampi. Best views of the hill are offered as you walk from Hampi Bazaar along the Tungabhadra towards Inscribed Vishnu Temple and Vitthal Temple.
Now here it gets a little confusing geographically. Vaali while killing an asur had spilled blood and desecrated Matanga’s Ashram; assuming Matanga Ashram would be on Matanga Hill. The Rishi had cursed Vaali that he will die the moment he entered the precints of the ashram. Therefore Sugreev afraid of Vaali had made Matanga Hill his home. Matanga Hill is across the river Tungabhadra in Hampi while Sabari Ashram, Pampa Sarovar and Rishyamukh Hill are across Hampi in Anegundi. Maybe Sabari moved to the other side of river to Anegundi after passing away of Rishi Matanga. But then Ram and Lakshman would have met Sugreev on the Matanga Hill and not Rishyamukh Hill. Also, Sugreev’s Cave is in Hampi and not Anegundi, near Matanga Hill next to King’s Balance and Vitthal Temple.

Did you say this is Kishkindha Kingdom? By the road, you happen to see this relief sculpture carved on one of the boulders. Hanuman can be seen doing assorted activites including carrying the Sanjeevani Parbat on his head to heal Lakshman. 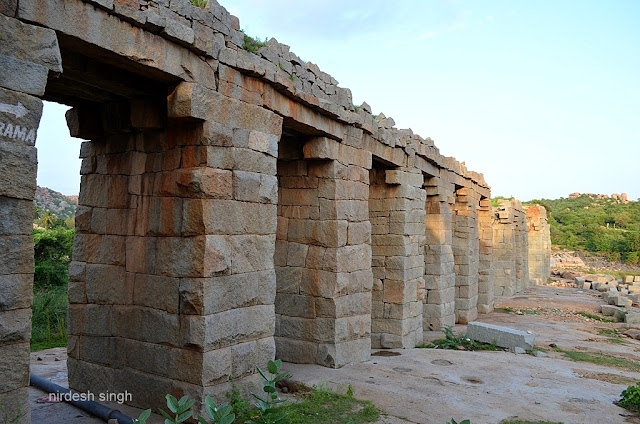 On your way back to Hampi, you come across another Vijaynagar marvel – an aqueduct straddling a stream. Aqueduct is a bridge like structure that acts as a conduit for water to flow over a channel or low ground. This aqueduct has been named after Bukka, one of the founders of Vijaynagar Empire. You notice a portion of the structure has collapsed since your last visit. Built of solid blocks of granite, the aqueduct looks imposing, again indicating the building innovation and prowess of the founders of Vijaynagar. It was this granite that built the empire and possibly this granite that kept the invading forces from the north in check.

Just like the aqueduct, Anegundi is the bridge between old Hampi and the new empire of Vijaynagar. Let us appreciate the old world before we cross the bridge into the newer times.
Getting There: Anegundi is about 15 kms south east of Gangavathi taluk of Koppal district in Central Karnataka. Or take a boat or coracle ride from Hampi side just beyond Vitthal Temple.


A version of the story appeared in the February 2017 issue of Rail Bandhu, the on-board magazine of Indian Railways 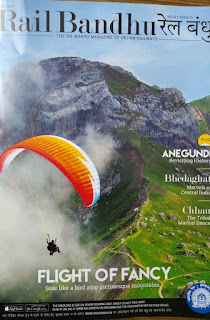 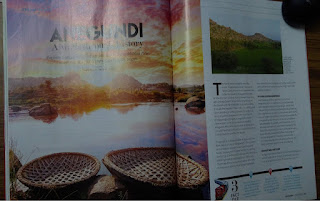 Related links on this blog:


If you liked the blogpost then