Ashapuri Temples, situated between Bhojpur and Bhimbetka, do not attract even a fraction of visitors as its two better known neighbours do. Even though MP Tourism has good signage but the dirt track leading to the temples discourages the average traveller who ignores the Ashapuri Temples and keeps going towards Bhimbetka on the smooth black top road. Also, while Bhojpur and Bhimbetka have their reference points of the giant Shiv Temple and prehistoric Rock Art respectively, Ashapuri Temples have sadly nothing to identify them with. Things are expected to change soon. 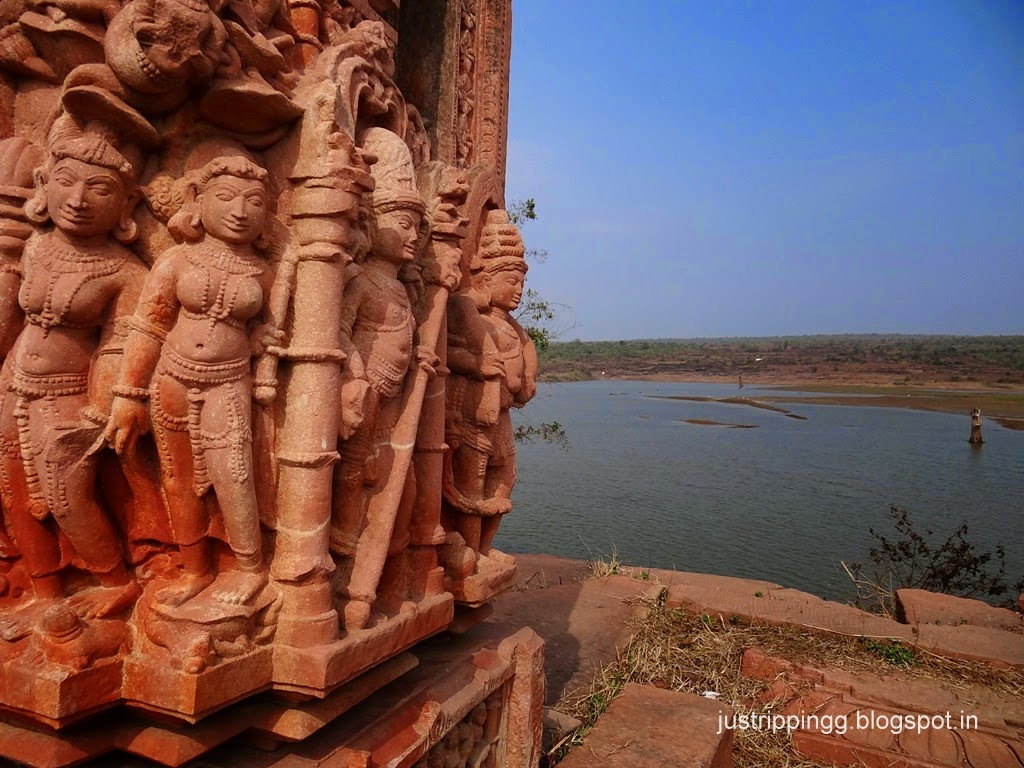 For you, the dirt tracks work as harbingers of new discoveries. A dirt track means that the place you are looking for is off the tourist grid and finding it will give a heritage junkie like you an intense rush. About six kilometres south of Bhojpur Temple, the sign indicates that Ashapuri Temples lie two kilometres to the left. You bump along the track among the lush green fields spread all around you. And then you run into a dead end. It seems that even the locals are not aware of the temples - they are pointing you to Ashapuri village that was couple of kms down from the point you took the left on the dirt track.

Few more enquiries and you are rumbling ahead on an iron bridge. In Madhya Pradesh the scenery gets prettier and full of surprises as you venture into the interiors. Soon a lake makes its appearance. A lone boat without its owner bobs on the water. On the far side of the lake some kids go running and splashing into the water. Beyond the lake the hills rise on three sides. The place has perfect solitude.  This is the absolute bliss zone - you are lucky to keep seeing them across India.

You keep driving on the bund road with the lake on your left. On the corner of the lake and the bund you see the group of temples on the left. The temples on the edge of the lake have fallen into the water with the gentle waves lapping at them. Just below the ancient ghats a man washes his clothes on a stone slab.  The temples are built on a gradually rising hill. Most of the hill is covered in dry vegetation of winter months. There is not much left of the complex. You only see a lone structure standing and few upright pillars.  The sign indicates that this is Bhutnath Temple of Ashapuri Group of Temples. The temple complex is under the protection of Directorate of Archaeology, Archives & Museums, Government of MP.

As you enter the complex, it is apparent that only the foundation of temples survives. Everything else is lying broken on the ground. Some sanctums of the temple are seen in the surviving platforms or pithas. Looking at the temple members scattered all around, it seems that some temples had flat roofs while some were built in Nagara style with shikhars. Some temples have shivlings while some temples have their foundations dug with the stones neatly marked. Here, temple architecture students can get a good idea of how the different stone pieces were put together to construct the temples.

The good thing is that MP Archaeology, as part of some preliminary survey and study, has put the dismembered stones in different groups and has numbered the pieces. It is possible that funds are awaited and restoration work might begin soon. Just beyond, the hill rises and whichever way you see there are mind boggling number of temple fragments taking up every inch of the ground.

Some research indicates that the complex consists of twenty six temples of which the Bhutnath Temple was the largest. Most of the temples were built from 9th to 12th century and are attributed to Pratihars and Parmaras. Both Vaishnav and Shiv temples were built.

These temples are relatively small just like the Bateshwar Group of Temples in Morena. Even the setting on a gentle hill is similar. While Bateshwar has tanks and baolis, Ashapuri is built overlooking the picturesque lake.You can now actually visualize what the Bateshwar Temples would have looked like before the conservation by Mr. KK Muhammad restored them to their original splendour. It is also possible that just like at Morena, these temples were destroyed by the same earthquake.

The only erect structure is of the Bhootnath Temple or Temple 5. The east facing Bhootnath Temple is the largest temple dedicated to Lord Vishnu and was built in the new Bhumija style of architecture. Paramars who built this temple developed the Bhumija style and looking at the fragments, the temple was similar to Udayeshwar temple of Vidisha. The mandap with erect pillars was built of red sandstone. The shikhar had five bhumi (storey) compositions. Fragments and images recovered from the site confirm the temple was grand and richly decorated.

Though Ashapuri now is a little known place, it was a flourishing centre and saw continuous temple construction activity for about four centuries. It is believed artisans who built the nearby massive Bhojpur Temple came from Ashapuri. It was Ashapuri that saw the introduction of stylistic style of temple making called Bhumija. In North India, from seventh to tenth century, Nagara temples were of Latina type. This form had temples with curved spire or shikhar with amalakas at the corners of their false storeys. Some examples of Latina form are the temples at Bateshwar in Morena and Terahi in Shivpuri, both in MP. From tenth century onwards Latina form evolved into the multi-spired Shekhari or Anekandaka mode of Nagara in central and western India. Shekhari is a group of miniature shrines embedded into the single spire of Latina temple. Shekhari temples are found at Asoda and Modhera in Gujarat and Khajuraho in MP. The Nagara style or ‘Tradition A’ can also be called Pratihar style.


It is in this context that Ashapuri is important. Bhumija style did not evolve but came into being abruptly around the turn of 11th century here at Ashapuri. The Paramars established Malwa as their centre for Bhumija temples called ‘Tradition B’ while Nagara was called ‘Tradition A’. At Ashapuri both styles co-existed and acted as the melting pot from which Bhumija style emerged. The new style had Deccan-Dravidian features which meant that artisans came to Ashapuri from the Deccan. Ashapuri in a sense was the Aihole of Central India where experimentation led to a new style. So while elsewhere in Malwa temples were built in pure Bhumija style, here in Ashapuri, some temple remains are seen with transitional characteristics. Shiv Temple at Bhojpur could have been the grand culmination of Bhumija style but was left unfinished. Bhumija style is distinguished by central projection tapering towards the top on each of the four faces. The quadrants formed are filled with miniature spires, in horizontal and vertical rows, all the way to the top. Udayeshwar Mahadev Temple in Vidisha is the best example of Bhumija style. The temples at Ashapuri demonstrate the thinking in the canon Samaranganasutradhara written by the greatest Paramar King Bhoj I who probably was the benefactor of Ashapuri.


Walking up on the hill is not easy as the ground is littered with temple fragments. There are thousands of them in all directions, but mostly clustered in groups. There is a shed with couple of caretakers looking after the site. After some time they lose interest in you. You teeter around the fragments taking in the sight of incredible destruction.

Standing under a tree at the top of the hill you seem to be transported back to the times when Ashapuri was the the place to be for a master artisan. The place and the atmosphere provided you with the canvas to showcase your skills. You experimented with designs and with forms. The king treated you well and the people loved you. You saw Ashapuri change from a town on a hill to the temple town attracting even greater number of artisans. Some even came from distant Deccan. You got a chance to teach and imbibe new styles. Today, in the present as you look down at the lake and at the vast number of temple remains, you wonder if by magic the fragments would just arrange themselves into their original forms and Ashapuri comes back to life. You are not day dreaming - such magic has already been performed at Morena. On the other side the hill dips. There could be remains of other temples in the surrounding hills waiting to be discovered.


On the other side of the temple complex is a Hanuman Temple with its dome and walls painted pink. There is a priest and some images are embedded on the sanctum walls. The temple looks of recent construction. In the courtyard are the remains of platform of another medieval temple.


The broken splendour of the temples, the quiet of the once humming temple centre, and the desolation of once teeming town leaves you affected. Reluctantly, you leave the complex and drive back along the bund of the lake as the Ashapuri Temples recede in the background. And again you are wonder stuck by the huge unknown heritage troves India has to offer as soon as you hit the dirt track.

You come back to the main road and drive towards the Ashapuri village that houses the museum. Intact temple members have been displayed here - some outside in the open while others are stacked in the rooms inside. It is apparent that Ashapuri temples had riches of sculpture. There is an exotic image of Shiv Parvati along with Rishabh (Nandi) and Simh (Parvati’s vehicle Lion). Rishabh and Simh rest at their feet. The amazing feature of the image is Shiv delicately lifting Parvati’s chin with fingers! There is another huge image of Dancing Ganesh with one hand carrying his teeth and the other hand in a possible dance mudra. The images here at the museum together with the fragments of pillars, walls, door jambs, ceilings and shikhars laid out on the hill would have all combined to create a temple wonderland that Ashapuri truly was a millennium ago. You are sure when you come here next time, the site will be as spectacular as it was 1300 years ago.

Coming out of Ashapuri village as you come back on the main road there is another temple site on the left called Billota Shiv Temple. Again the temple is in ruins. The site has an impressive shivling possibly a Sahasraling. A richly decorated broken Vishnu Dasavathara pillar has different avatars of Vishnu - Varah, Narsimha, Vaman and Parasuram on its four sides.

It seems the glory days of Ashapuri will be back soon. School of Planning and Architecture at Bhopal is inviting applications from students for an on-site programme at Ashapuri Temples. This international ongoing project is collaboration between SPA Bhopal and Welsh School of Architecture, Cardiff University of UK and is funded by World Monument Fund. The two month internship programme will begin from 21st May 2014. The interns are expected to photo document, survey and create database at the site which will help in the possible erection of certain temples. This has been announced in the background of a partnership between WMF and MP announced on April 24, 2012 that will take up restoration of Ashapuri temples on priority.

Once the temple conservation is done and a road built, you are sure the tourist circuit will include Ashapuri Temples and Ashapuri will regain its rightful position as the Aihole of Central India. Pratihars and Paramars will love it.

Getting There - Ashapuri in Raisen district of MP is about 35 kms from Bhopal and 6 kms south of Bhojpur Temple. You can see Bhojpur Temple, Ashapuri Temples & Museum and Bhimbetka in a single day.