Where once the Indus Flowed - Narayan Sarovar, Koteshwar Mahadev, The Great Indian Bustard and Mandvi

Today, the plan is undertake a long drive that will see you leave Kutch and reach Jamnagar in the night. The drive is going to be 500 kms long and it is imperative that you fuel up on the fulfilling and wholesome staple breakfast of fafda and jalebi. 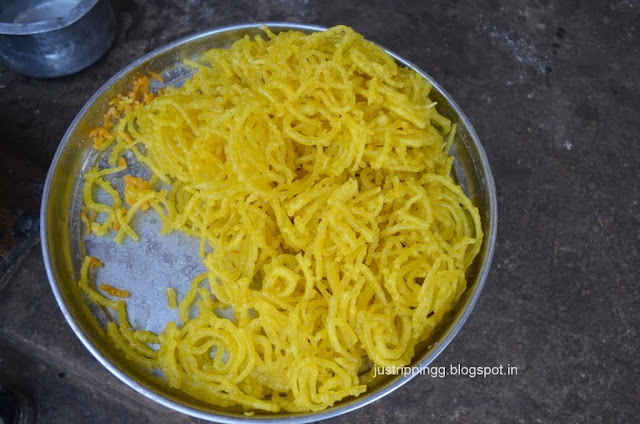 The fafdas are coming out hot just outside the gates of the dharamshala you stayed in for the night.

The Shree Kutch Narayan Sarovar Annakshetra ane Bhojanalay Dharamshala in Narayan Sarovar is a quiet and clean affair to stay for the night. They charge nominally for the rooms and offer free meals. Of course, you are welcome to make donations. 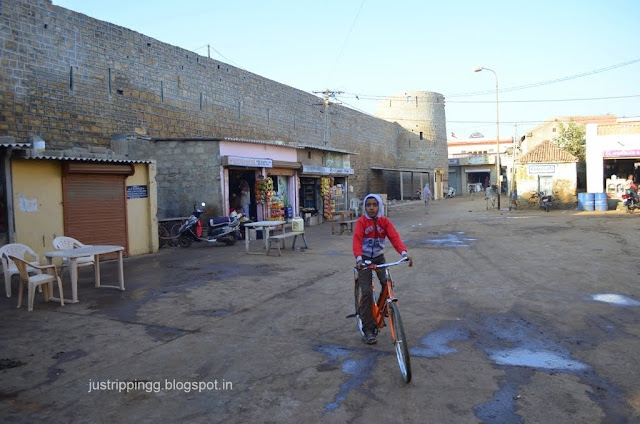 Okay, now that you notice, there are fortification walls where you are eating. You finish up the last of the jalebis. A spiked gate leads you inside the fortified complex with number of temples and residences. 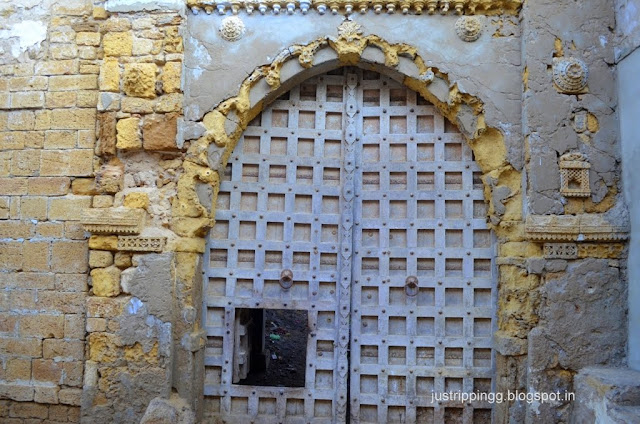 This is the Narayan Sarovar temple complex. The main courtyard has seven temples. Maharani Vagheli Mankunvar, wife of Rao Desalji (1718-1741), had an unpleasant experience with the priest of Dwarkadhish (but then who doesn’t have unpleasant experiences with pandas) at Dwarka and decided to create another pilgrimage centre that could rival Dwarka. She first built two temples of Lakshminarayan and Trivikramray. In addition, she built five temples in a row. These five temples are dedicated to Lakshmiji, Dwarkanath or Ranchhodji, Govardhannath, Adinarayan and Lakshminarayan. The shikhars of the temples glow in the early morning sun.

On the other side of the courtyard, a door pierces the wall. Steps lead down to the waters of the holy Narayan Sarovar. Bhagwat Puran mentions a great lake called Narayan Saras visited by devotees and Siddhas. Once upon a time the Indus would feed this lake before the river’s course was changed by the earthquake of 1819. The earthquake created a dam called Allah Band to the north of Lakhpat that shifted the Indus west, turning the Rann dry. Alexander too recorded seeing the huge lake in 325 BC. (Some of the Greeks later settled in Vadnagar). Now the huge lake has disappeared leaving a small tank with steps leading to the ghats on three sides. Temples dot the ghats.

Narayansar or Narayan Sarovar is one of the five holy sarovars of Hindus. The other four are Mansarovar in Tibet, Pushkar in Rajasthan, Bindu Sarovar in Sidhpur, Gujarat and Pampa Sarovar in Anegundi, Karnataka. You are pleased to realise that except Mansarovar, you have now seen them all.

It is cold in the morning discouraging any devotee to take a dip. There are not many devotees here this morning and the priests are eyeing you expectedly - the trick is to avoid eye-contact and keep walking!

You come back into the courtyard to find the steps that will take you on top of the battlements. This time you will walk your way out taking the aerial route. Now that you realise, the Trivikramray Temple does look like Koteshwar Mahadev Temple from your vantage point on the wall.

Checking out of the dharamshala, you decide to go back to the nearby Koteshwar Mahadev Temple to have another look, this time in the daytime.

Koteshwar, the Ten Million Gods, is built at the mouth of the Kori Creek. Once upon a time, the town was probably cut-off from the mainland by tidal creeks but now a causeway is built from Narayan Sarovar. Last evening, you were enchanted by the dreamy sunset over the lapping waves. The setting sun cast its golden light on the Koteshwar Mahadev Temple, the western-most Temple in India.

Mythology has it that Ravan built this temple when the ling he was carrying shattered into crores of pieces. Hsuan Tsang had visited Koteshwar in 640 AD when he found 80 monasteries, 5000 devotees and about a dozen temples.


This morning the water has receded leaving some boats beached on the mud. A jetty leads to the BSF border post where the jawans are scrutinising the documents of fisherman who probably landed overnight from their fishing expeditions. Later the jawans will sift through the cargoes just to be sure.

The Koteshwar Mahadev Temple built on a hillock rises over the waters. The present temple was built by two merchants or Seths, Sundarji and Jetha Shivji in 1820, after the 1819 earthquake that might have destroyed the original temple. The temple has a swayambhu or self-born ling that has iron nails driven into it by Alauddin Khilji, according to a local legend.

Taking one last look, it is time to bid goodbye to Kutch as you make your way south towards Kathiawad. But before you do that, there are few more places you want to check out on the way.

The skies continue to delight as the white woolly clouds hover over the road. The presence of Indus here two hundred years ago is a mighty interesting idea and you think you have found the proof. 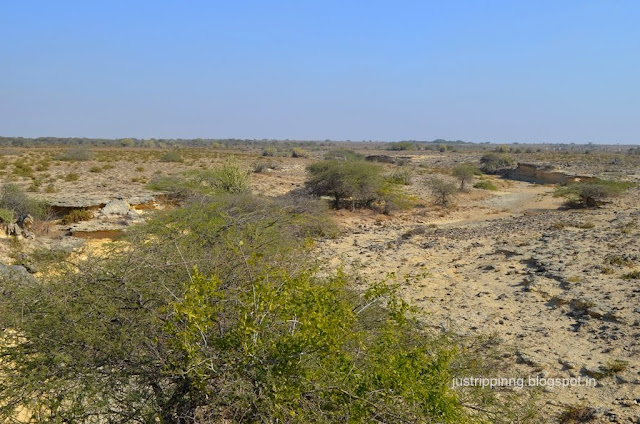 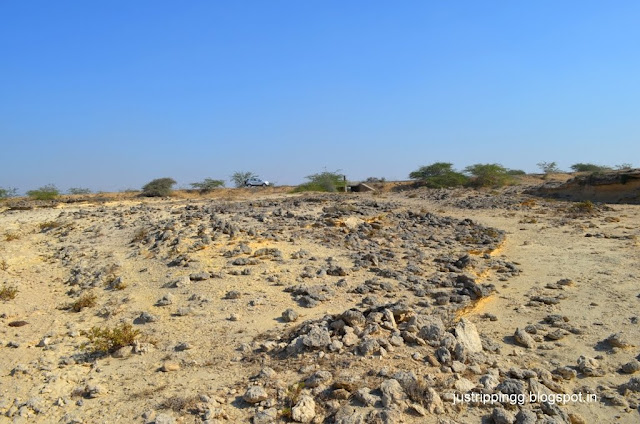 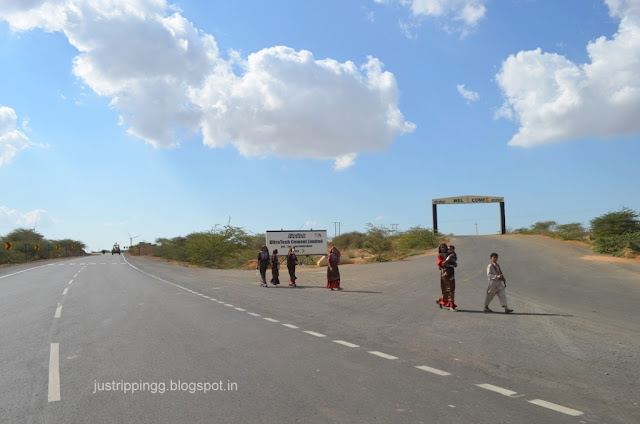 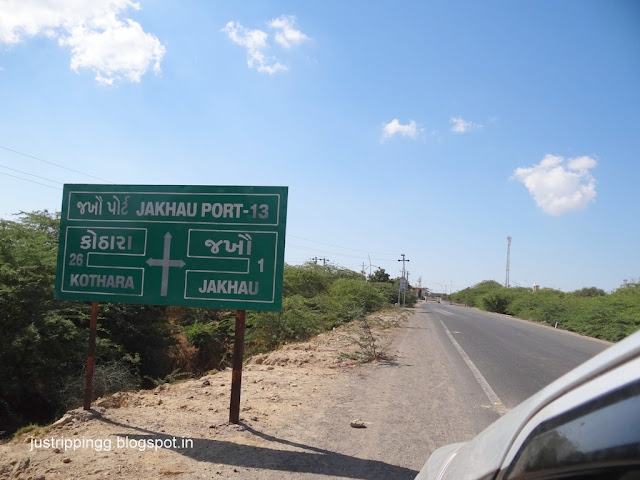 This trip is about visiting places that you long ago read about in the school textbooks - places like Rann, Porbandar and Diu. You had also read about the endangered Great Indian Bustard and luckily there is a sanctuary that falls on this route. 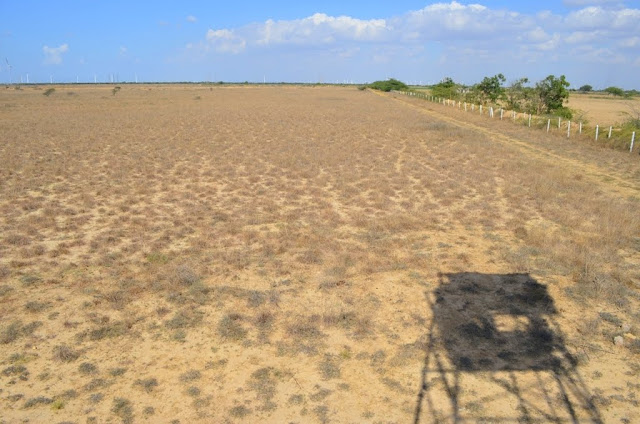 Near Naliya, you make a detour going towards Jakhau port. Few directions later, you are driving towards the Great Indian Bustard Sanctuary. The sanctuary is few acres of scrubland with the wind mills rising in the distance. You need permission from the Forest Division to enter the premises. It's okay - just being here feels good; just like you felt good standing at the entry gates of Sriharikota last year. From the gate you scan the grass all around but no luck. The camera lens strained but all you could get were some cranes. Well you tried! 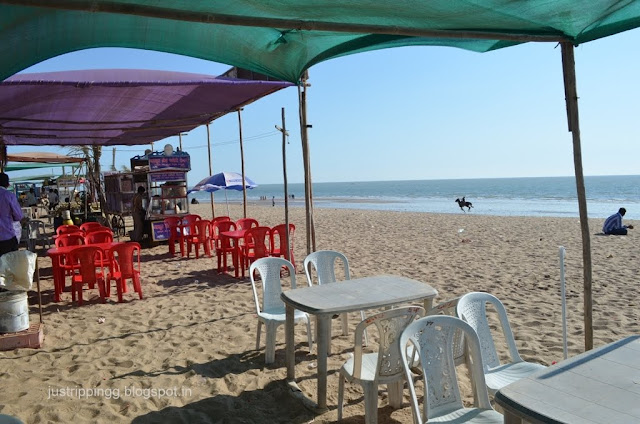 Next stop will be Mandvi via Kothara. You have been to Kothara before taking in the raging waves of Pingleshwar Beach. You will give it a miss this time around and will go straight to Mandvi Palace and Mandvi Beach. As across the state, Gujarat does not have signs for attractions and it is when you enter the Mandvi city you realise that you have missed seeing the Mandvi Palace. Well, you don’t have the heart to go back.


The day has turned hot and you are making your way to the popular Mandvi beach. The scene at the beach is similar to what you have seen at Mumbai’s Chowpatty. Well Mandvi, in addition to the bhelpuri stalls, also has horse and camel rides. The wind farm built on the beach gives another dimension to the beach here. The fafdas have long disappeared in your belly and it is time to have some ‘peeja’ (that is pizza for everyone else – don’t you love Gujarati accent!) and bhelpuri for lunch.

You are negotiating the lanes of the old city on your way out of Mandvi. You make another tight left. And then as it always happens, the sight leaves you thunderstruck. In the tumble of traffic you manage to park and leap out. It seems you have just stepped out of the time machine. You are in the Biblical era and Noah’s Ark is being built, ready to sail away. You are sure this is a make-believe Hollywood movie set. India gives you wonderment around every corner.

But then the constant honking on the road pulls you back into the present. On the dry Rukmavati river bed, dozens of wooden shells that look like ships lay sprawled. The ships are in different stages of construction. Planks of sal wood are being assembled together. You are not sure what to make of all this – sometimes the ships look like the skeletons of some magnificent sea beasts and sometimes it looks like a sunk ships of long ago have been salvaged.

This is the shipbuilding industry of Mandvi or Mart which has lasted for over 400 years. Mandvi has a rich maritime history and was known for its intrepid seafarers many of which were the Siddhis. was an important maritime trading centre of Kutch. At one time the Mandvi merchants owned up to 800 ships. One of the ships went all the way to England and came back to Malabar. Trade was conducted with Arabia, Africa, Sind, Bombay and Malabar. Inland, there was this Desert Camel Caravan trade relations with Marwar and Malwa. Did the Bohras, owners of the magnificent Siddhpur havelis, made their way to Zanzibar from Mandvi? Another possibility to explore! Yes they did but that will be another story.

You cross the old elegant bridge over Rukmavati river to come back to the NH 8A highway on your way to Jamnagar.

In Malia, you are pulled over by the police for the second time. This is a routine stop where the cops note your name and registration number. It is already dark and you need to get to Jamnagar before midnight.


The road from Malia to Jamnagar is a breeze. You are surprised that there is not much traffic going westward with you. As you reach the outskirts of Jamnagar town, a motorcyclist volunteers to lead you into the city and to your hotel. Did you say the people of Gujarat are the best?

The journey will continue.