Preponing the Gujarat road trip and coming to Vadnagar first has been incredible and fortunate. Peeling the layers of time among the soaring Uttarayan kites has been an unbelievable experience in the mysteriously unknown town of Vadnagar.

Now you need to follow the original plan to get to Dholavira by evening; even if it means missing going to Patan for the second time. But first you need to swing by Siddhpur. Last time around you missed seeing the havelis in the old city. To keep the suspense alive you have not seen any photos of the Siddhpur havelis on the net.

Reluctantly you leave surprise filled Vadnagar behind as you speed along the smooth SH56 and SH10 towards Siddhpur. The morning chill continues. You reach Siddhpur in no time. Last time you were in Siddhpur, you had just enough time to go see the Bindu Sarovar which is probably the only place where Shraadh for departed mothers is conducted.


Before the havelis you want to make a brief stop at Rudra Mahalaya. The place reportedly has temples and toranas. The complex is surprisingly packed with retired army kind of guards who do not let you use the camera in the premises. There are several ruined temples and a three domed mosque apparently converted from a temple. The complex includes two four-pillared and two-tiered toranas and a two-pillared torana. Though not as tall but they are as good looking as the toranas in Vadnagar. It is clear this must have been a magnificent temple complex during the Solanki era.


The most interesting part of the conversion is, while elsewhere the temples are totally dismantled and the material reused, here the shikhars from two temples survive on either side of the three-domed mosque. Mosque was probably built from the material harvested from about eleven temples that were originally built here.

Seeing surviving temples in the company of toranas sets you thinking. Did Vadnagar too have temples around the toranas? If the temples, though converted, could survive in Siddhpur despite Ghazni’s and Ahmad Shah’s efforts, what happened to the temples in Vadnagar?

It is clear that the premises are in some kind of legal knot. The original temples have been restyled to make newer structures. Now probably everyone is claiming the site as their own. So the government decides to post this army like platoon of guards.

You really hate such fracas during your heritage runs. Either the place is locked up. This scenario is okay. Most places have fence or wall over which you can jump; just making sure you can come out. You still remember jumping into Malik Ambar Tomb’s enclosure in Aurangabad only to find that you could not climb out. Kids had to pull you over the wall. The second scenario gets your goat. There is guard inside but will not let you in. This has already happened twice at Bijri Khan Tomb in Delhi's RK Puram. Third scenario like here in Rudra Mahalaya, is what gets all your goats and sheep – guards feeling all important ordering you around, on what and what not to do.

Despite repeated request the guards are not letting you use the camera. The guards are almost combative in their nature as if you had stepped in their house. But then the place does look like their house. Makeshift beds are spread out, laundry hangs from strings and smoke billows from the stove that has just been lighted up to cook lunch.

Neighbourhood devotees drop in to offer prayers. But you have about four pairs of eyes following you. You want to get out of here. You come out to see if you can get some angles outside the complex hemmed in by high fence and houses. With sun shining low you can’t get any good shots. Well you tried. Despite the unpleasant start to the morning, Vadnagar hangover keeps you in good spirits! Anyway the premises are all knocked down and broken and overgrown. The least ASI can do is to kick these resident guards out and clean up the place. 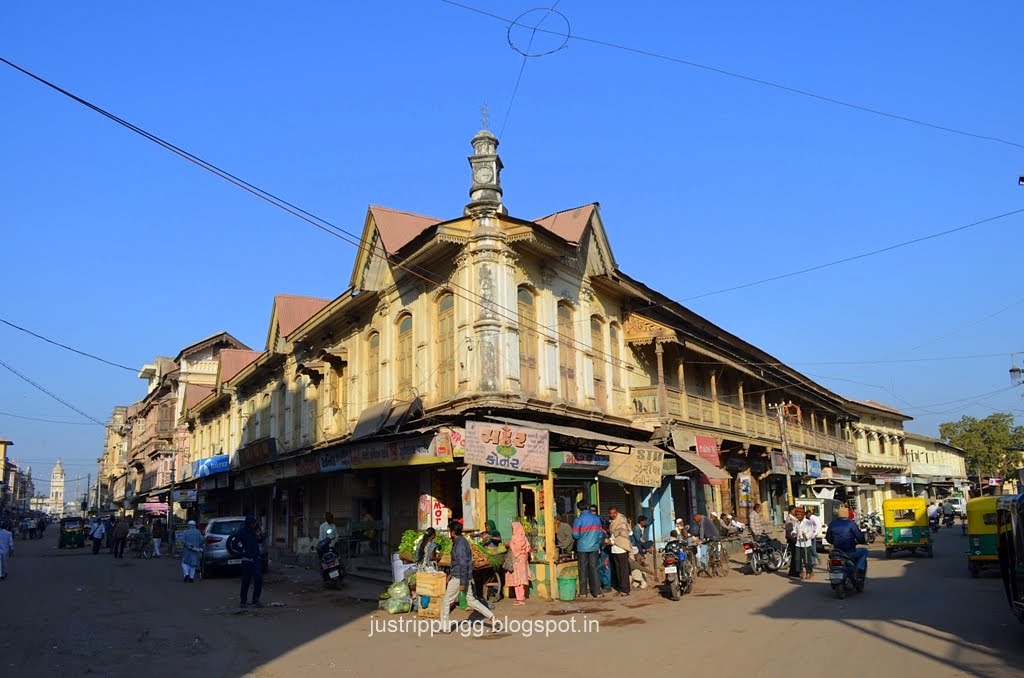 It is time to head to the clock tower in the city to explore the havelis. You have seen the frescoed havelis of Shekhawati in Rajasthan. You have no idea what to expect in Siddhpur. But you have a feeling it will be another jaw dropping construction binge which has been a common feature across the ages in India. 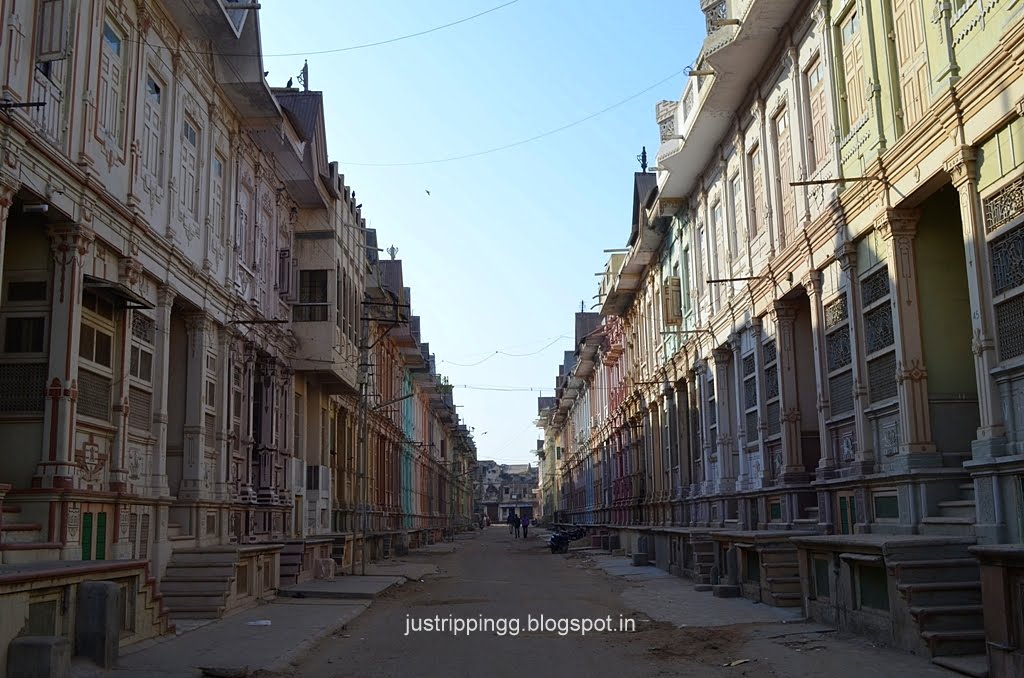 Parking on the main street you are greeted with towering havelis on both sides leading to the clock tower in the distance. You have a feeling there is more. Walking randomly among the lanes you come to this canyon like street.

On both sides of the lane tall havelis rise, blending into each other as they stretch to the far side. You could peek from one corner and see straight fifty houses down the lane. While Shekhawati havelis are individualistic with different plans and elevations, here there is a perfect homogeneity and symmetry. The proportions are perfect and precise. The houses are narrow and high with facades ornamented. The only feature that distinguishes the houses seemingly pasted together is the colours and ornamentation - full range of rainbow colours have been used and all kinds of geometric patterns adorn the facades, the doors, and the windows. 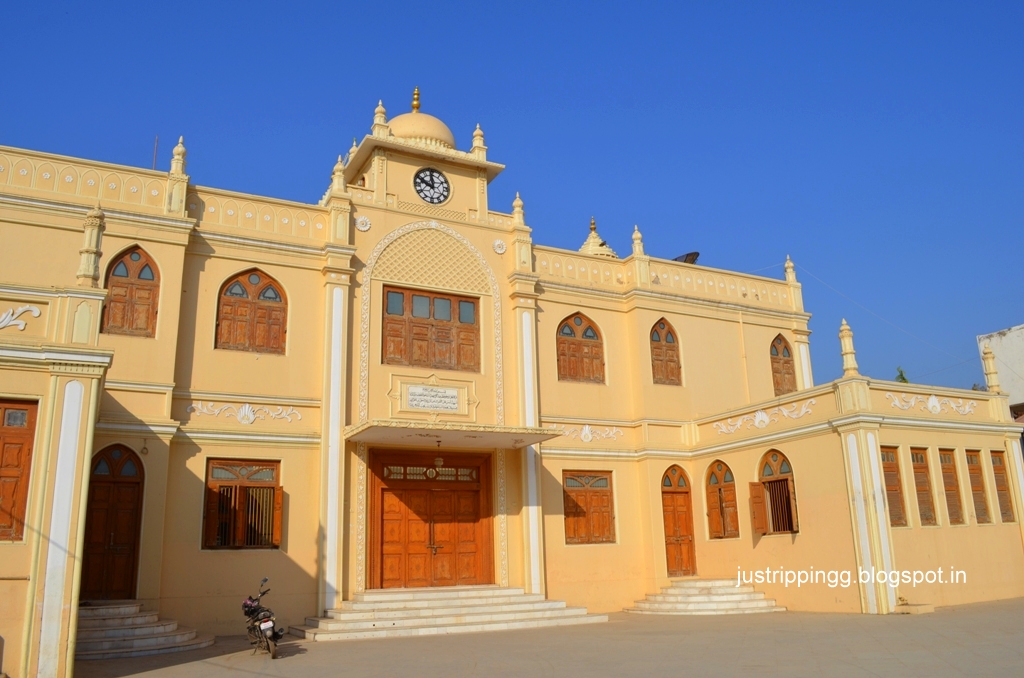 You just wonder how it would have all started in the first place. Groups of families would have come together. Land would have been acquired and divided into plots of equal size. The construction of all houses in a row of a lane would have most probably started at the same time. Since the designs do not vary much, it is possible the same architect designed entire neighbourhoods. Now your mind is in overdrive - Is it possible that an enterprising builder of those times built the houses first, sold them and let the owners design the interiors and the facades themselves later? 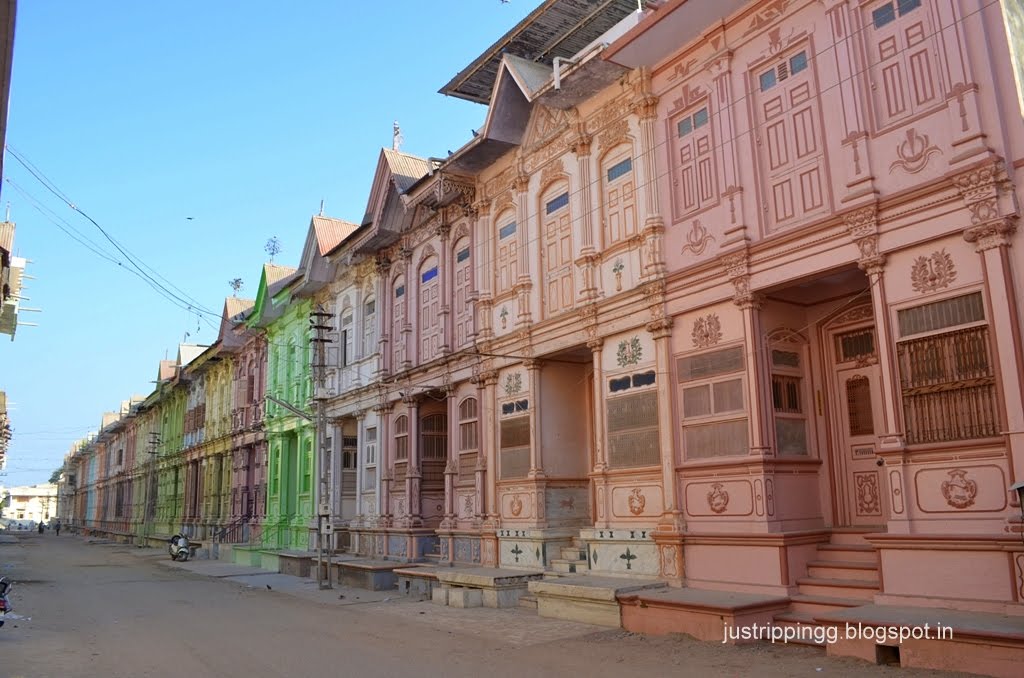 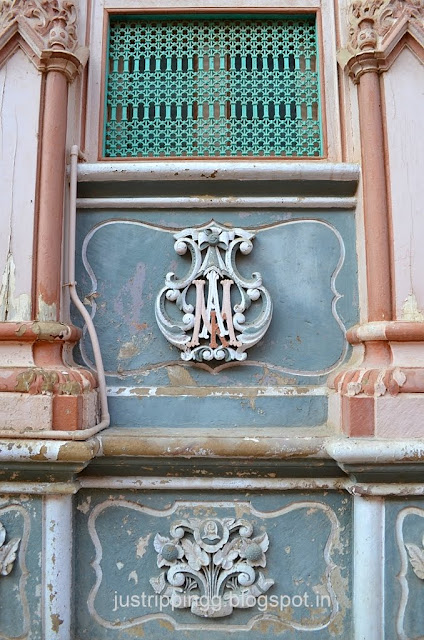 You walk in a trance from one lane of the neatly designed grid like layout to another lane but the story stays the same - rows and rows of seemingly empty houses in the canyon like streets, glowing in the morning sun. You seem to be living Revathi’s dream sequence in the movie Raat as she runs through the streets with not a soul in sight. This is nothing like you have ever seen in India. Seeing you perplexed, a local resident remarks, “This is France.” He is right. This is not India. This does not look remotely Indian. You have just walked into Europe. This is just another day of wonderment in Incredible India. 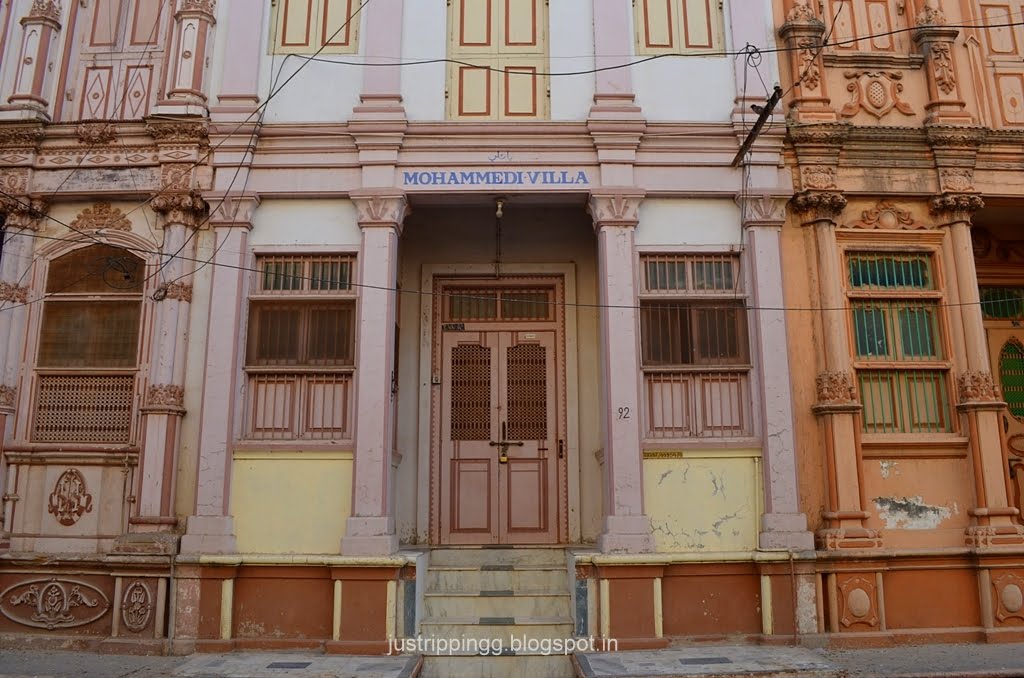 Streets in India are loud and crowded. Siddhpur main street looks like any street of a small town - shops, cows and crowds. Few lanes away it seems you have walked into a beautiful abandoned town. There is nobody on the streets. And then you notice. Most houses are locked. There are no open windows or children playing. There are no sounds coming out of the houses. If you wait, you will see a woman attired in a colourful rida walking. A milkman knocks a door with an elderly person finally emerging out. Otherwise a forlorn quiet pervades the lanes. 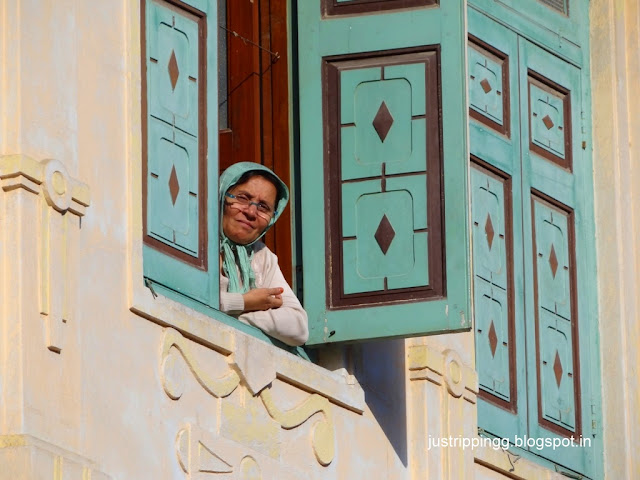 Where is everybody? The older generation might have passed away while the descendants have moved away to live in the big cities, visiting once a year during the holidays. Some houses have peeling paint while some thankfully are getting a new coat of paint. The porches look untended. Houses have titles written over the main gates, while family’s logo or ‘coat of arms’ provide gravitas to the mansions just like the palaces in Rajasthan.

These Siddhpur neighbourhoods or mohallas are called Vohrawads that belong to Dawoodi Bohra community. Bohras made their money trading in Africa and Arabia. Like the Marwari community of Shekhawati, Bohras also put their money in their homeland by buildings rows and rows of these beautiful and stately havelis and mansions.

Like in Shekhawati where havelis are being pulled down to build modern houses, Siddhpur too is beginning to see the horrors being inflicted on the senses. You can see vacant plots where the havelis have been pulled out while in other places few modern buildings glaringly disturb the aesthetics. It will be up to the heirs to conserve this unique piece of architectural heritage. They will have to decide whether to treat the houses as pieces of real estate that go to the highest bidder or to preserve them in memory of their forefathers.

You do feel a tinge of sadness when you see built heritage crumbling. In a country where the pressure of population is ever increasing, havelis here in Siddhpur, like built heritage and forest and hills and wildlife elsewhere will continue to battle for survival. 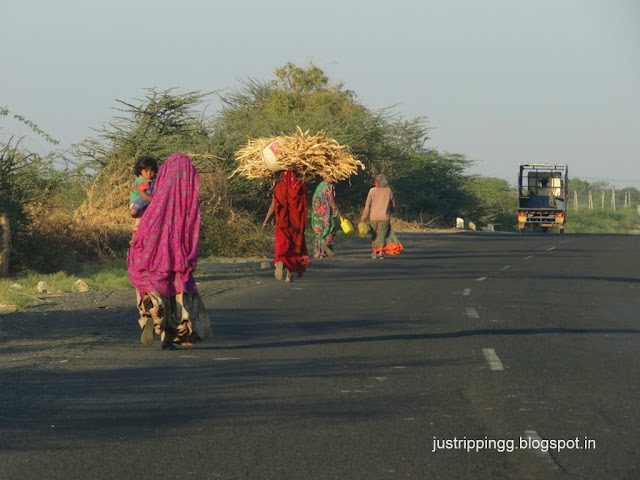 From Siddhpur, you will move west all the way into Kutch. Next destination is Radhanpur and then to Adesar and Rapar before you turn north to drive into the island of Khadir which has the Harappan site of Dholavira. You enjoy the big wide highways. Rann makes it appearance sporadically. On the left Indian Wild Ass Sanctuary stetches. Today you will not be stopping here though you are rewarded with the sights of some nilgais. And yes, the landscape despite the harshness of Rann continues to exhibit green patches. The abundant trees and bushes and the colourful attire of women continue to light up the landscape. 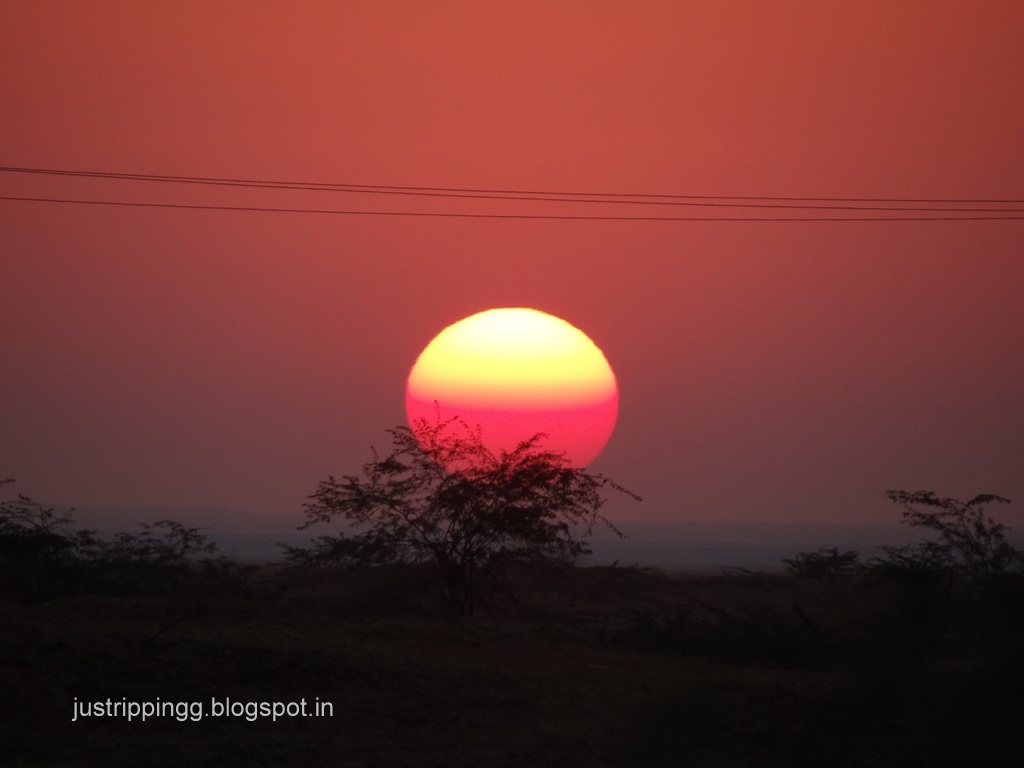 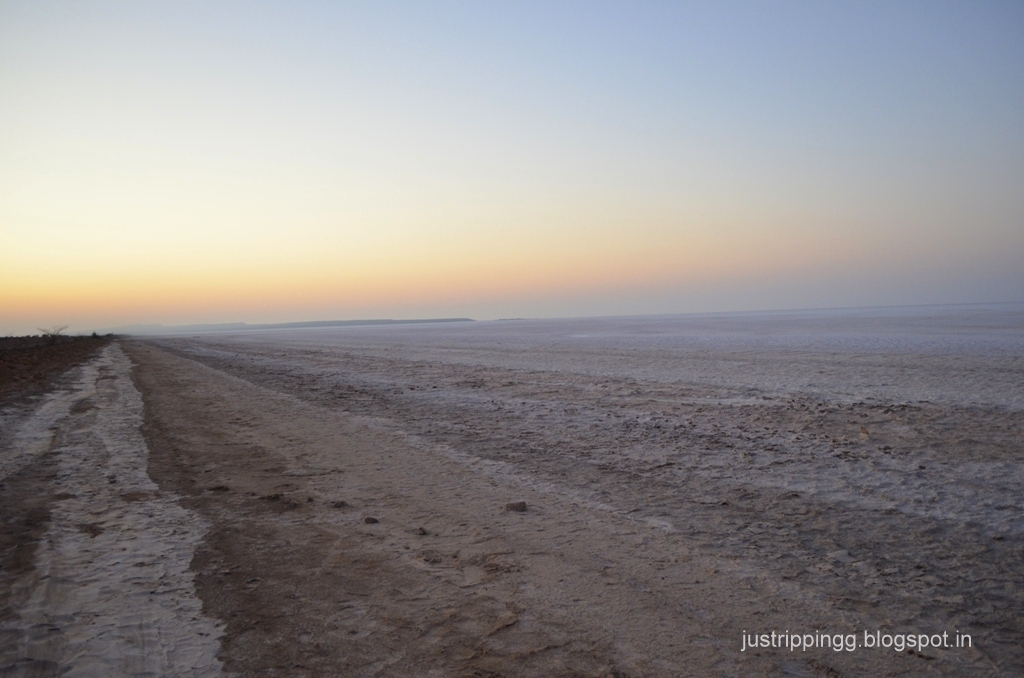 The road from Adesar to Rapar is getting dug up making your progress slow. But as they say everything happens for a purpose. As if pre-ordained, you arrive at the narrow causeway connecting the Gujarat mainland to the island of Khadir at the twilight hour. The sun has just sank behind the white Rann in the horizon. This is the road that leads straight to heaven. It seems you are floating in nothingness of dreamy pink and purple and blue. On either side, Rann stretches into even more nothingness of whiteness and blue skies. It is absolutely quiet and so surreal. You have a feeling what astronauts experience in space.

And then India surprises as she always does. Like a shadow, a man emerges from the dusk and walks into the horizon. He makes no sound; with head bent he doesn’t even acknowledge your presence, as if you don’t even exist. Within moments, like the land around, he dissolves into the pink. 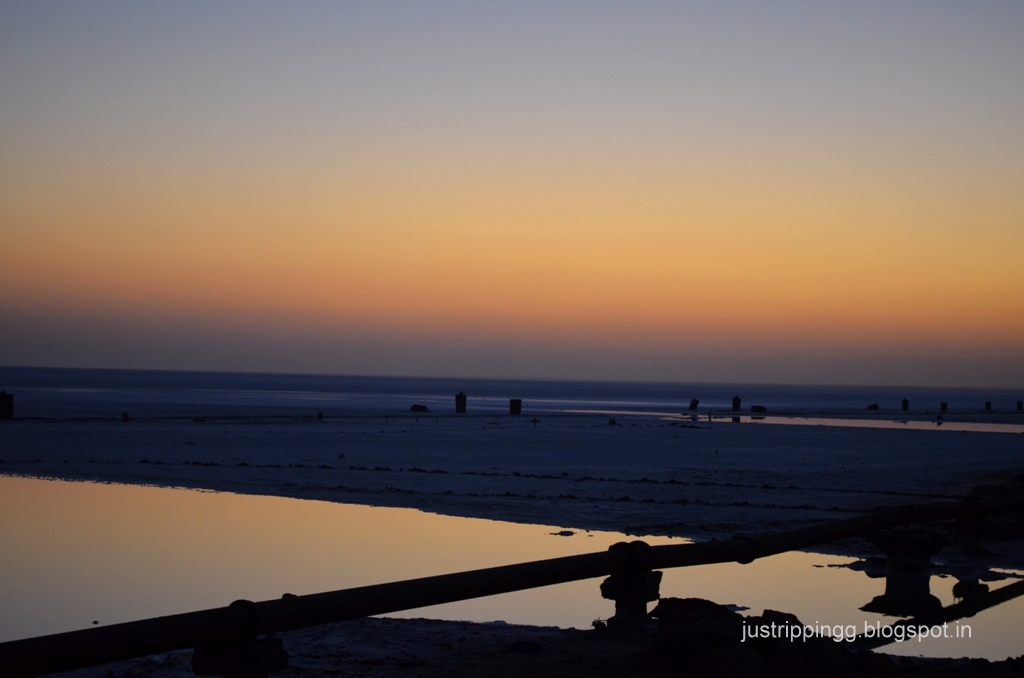 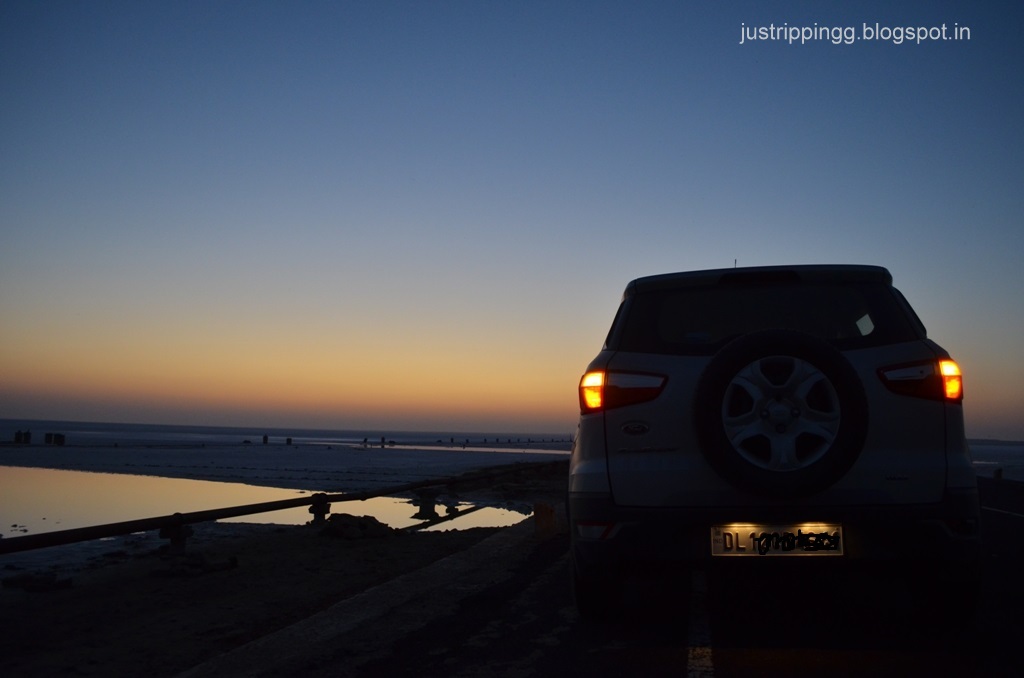 The experience is indescribably surreal and beautiful. You doubt you will experience anything remotely beautiful again like you just did in the last thirty minutes.

It is time to leave for Ratanpur. You will stay in Ratanpur for the night and go see the marvel of Dholavira twenty kms away in the morning.