A gentleman dressed in a suit has clambered up the platform next to this stately statue. The garlanded statue is resplendent in military regalia and a billowing robe. The gentleman lights up a cigarette and holds – yes, it is unbelievable but true – the lighted cigarette to the mouth of the statue. The statue seems to inhale and then lets out a puff of smoke. Few more puffs and the cigarette is gingerly placed in the fingers of the statue’s hanging right hand. I am witnessing another chapter being written in the book of incredibly astounding India.

I am in Jodhpur on the last leg of my solo Great Thar Desert Road Trip through the state of Rajasthan. The plan is to go see the Mandore Gardens and then to devote the second half to the ultimate fort of Mehrangarh.


It is early morning and I stop at a gate with a great red edifice rising just beyond. Jodhpur has everything built of red sandstone, just like Jaisalmer is entirely built of yellow sandstone. There is a smattering of wooden kiosks christened with names of lawyers indicating that I have entered court premises.
The elegant and magnificent edifice just beyond, with the tricolour fluttering on top, reels me in.  The building with a royal demeanour looks like a palace. The grand porch in the centre is crowned with imposing chattris (pavilions) and a dome.
I arrive at the porch. Wait a minute – am I really seeing this? India often throws surprises but this is something so outlandish that my sleepy eyes pop out. I watch the scene bewildered, rooted to the spot even as few locals on their morning walk, pause, bow their heads in reverence and amble away; as if it is another normal morning ritual.


After the smoking session, the gentleman offers flowers at the feet of the garlanded statue, lights up a bundle of incense sticks and then murmurs a prayer worshipping the statue. A fire on the pedestal completes the picture of a deity you would normally see in a temple. 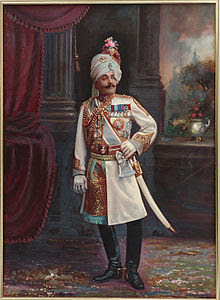 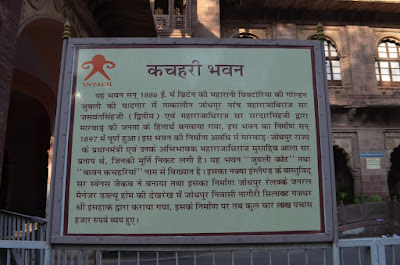 Today, I am standing in the porch of the Kacheri Bhawan, currently housing Rajasthan’s High Court, which was built in 1897 during the regency of Musahib-i-Ala of Jodhpur State, Lieutenant-General His Highness Maharajadhiraja Maharaja Shri Sir Pratap Singh Sahib Bahadur (1845-1922) whose statue is still holding the burning cigarette. ﻿﻿
﻿


Sir Pratap Bahadur was a career British Indian army officer and the third son of Maharaja of Jodhpur. Sir Pratap was also the Maharaja of princely state of Idar, in present day Gujarat, which was once part of Rajputana before independence. The Maharajadhiraja, an embodiment of a Rajput Prince, served four rulers of Jodhpur as Chief Minister and Regent. He raised and trained an elite Cavalry Regiment popularly known as Jodhpur Lancers. Later he abdicated his Idar throne in favour of his adopted son and nephew. It is quite apparent that the handsome soldier-prince’s life is a story of magnanimous service and sacrifice.
Anecdotes illustrate the colourful life of Sir Pratap. Upon arriving in London once, he was told that rooms were booked for him and his entourage in a hotel. He promptly goes to Buckingham Palace to meet with the Queen. The Secretary of the Queen asks him what the matter is. Sir Pratap replies, “When Queen visits Jodhpur, where would she stay – in the palace or a hotel? Sir Pratap promptly got an invitation to stay in the Buckingham Palace. 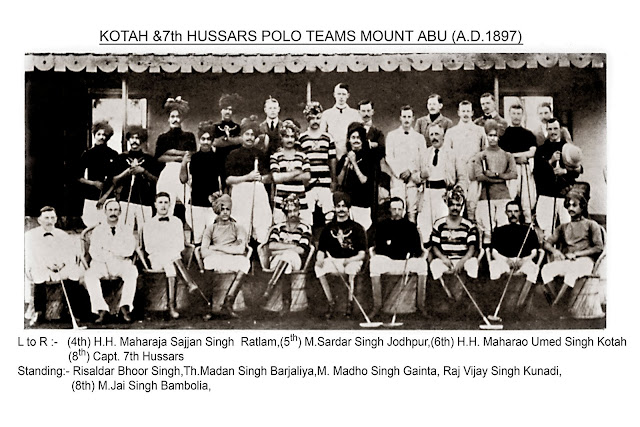 A favourite of Queen Victoria, he threatened to protest at the doorsteps of the Viceroy if he was not permitted to serve in the war, eventually getting decorated extensively in the battle fields of Afghanistan, China, France, Flanders and Palestine. Even at the ripe age of seventy years, true to his martial traditions of loyalty, he insisted on serving the Empire in the Great War by leading his cavalry unit armed with only swords and lances in the Middle East; in the process covering his regiment with glory. He led India’s first polo team to compete abroad and made Jodhpur breeches, the special riding trousers, popular across the world. At home he continued to provide unstinting support and guidance to the Jodhpur state as Chief Adviser and Regent.


The best known and most popular Indian of his day who had ballads dedicated to him, the battle-hardened swashbuckling warrior, now wants to reminisce about his colourful and fulfilling life in his golden years. The man who worships him daily understands that. There is no better way for the grand old man of Indian Polo than to deeply fill the lungs with the silken acrid smoke to puff it out and watch the swirling smoke create a collage of past wonder years.