The road lazily winds through the hills as you leave the fringes of the Yawal Wildlife Sanctuary in Maharashtra behind and enter Madhya Pradesh. You are making your way to the impregnable fort of Asirgarh beyond the historic town of Burhanpur on border of Maharashtra and MP. As we negotiate another turn the view ahead is both arresting and overpowering.

This ridge rising high over the other hills has unmistakable fortifications on the scarped edges. And if this was not intimidating enough, you can discern twin minarets soaring into the blue skies. The saying ‘building castles in the air’ has just lost its meaning. A tingle runs down the spine. Forts and that too little known ones have this effect on you. The fort plays peek-a-boo at every turn heightening the excitement into the red zone.

Asirgarh built on a spur in the Satpuras range and rising to 850 feet above the hill base commanded over the road from Hindustan or Northern India to Deccan during the medieval times. The kings of Faruqi Dynasty turned the hill into an unassailable fort as they ruled over Khandesh since the dynasty’s inception in 1382. Twenty kilometres to the south was their capital city of Burhanpur on river Tapti; the Gateway to Deccan. In the sixteenth century Asirgarh was regarded as the strongest fort ever built; its reputation further attested by travellers from across the world who had not seen a fortress so strong which had enough provisions and ammunition to withstand a long siege. Asirgarh was the coveted Key to Deccan and the Faruqis were not going to hand over the key yet. Not even to the Mughal Emperor Akbar.

Directed by the excellent MP Tourism signs you are making your way up the hill even as the fearsome battlements keep peeping through the tree cover; never letting you out of sight. Every metre on the way up it seems you are being watched from the battlements. Not a stretch of the road goes that is not visible from the bastions above – if not from the main fort but then from the intervening two additional levels of concentric fortifications. If this was not enough, some outlying hills with names like Koria Pahar and Nawara Dongar or the Bridegroom Hill have been scarped into natural bastions. No wonder King Bahadur Khan felt safe in the fort even as the 200,000 strong Mughal army kept up the artillery barrage. But then he should have known that rock fortifications and cannon balls are no match for human deception and betrayal.

It was the twilight of Akbar’s glorious career. He had to take care of some unfinished business in the Deccan. In the beginning of year 1600, Akbar rolled into Khandesh from Malwa. The Faruqi King Bahadur Khan refused to pay tribute to Akbar and duly took position inside the impregnable Asirgarh. After taking over Burhanpur, Akbar returned and the Mughal forces laid siege to the fort in April while Prince Daniyal was engaged in quelling Chand Bibi in Ahmednagar. The emperor could not bear the defiance of a small king on the all important route to Deccan. Intelligence confirmed that the fort had ample supplies of water, food and ammunition. Akbar knew subjugating the fort will take time and time was one luxury he did not have. He will have to employ trickery and intrigue.

Akbar invited the King Miran Bahadur Khan for negotiation. Despite his officers’ concerns, Bahadur Shah accepted Akbar’s invitation to meet in August. However, despite assurances and oath that no harm will be inflicted, the King was seized. But still the princes in the fort did not capitulate and the siege continued; the siege was now six months long. Akbar knew that the siege could continue for years while Prince Salim threatened to take over the Empire. He had to return to Agra but not without completing the conquest. So when treachery failed it was time for bribery. The garrison officers were bribed with gold and finally the fort capitulated in January 1601 after a siege and intrigue games that played out for ten long months. Akbar returned triumphantly to Agra but soon died in 1605 without realising his dream of reclaiming Central Asia of his forefathers or conquest of Golkanda and Bijapur.

You are finding the going as hard as Akbar. The narrow metalled track soon turns into an even narrower dirt track seemingly hanging by the side of the hill along with your car. And then there is a loud pop. Was that a canon shot? Have you just time travelled? Apparently, the front left tyre had burst hitting a pointed rock on the shoulder. The fort will have to wait as the wheel is replaced. 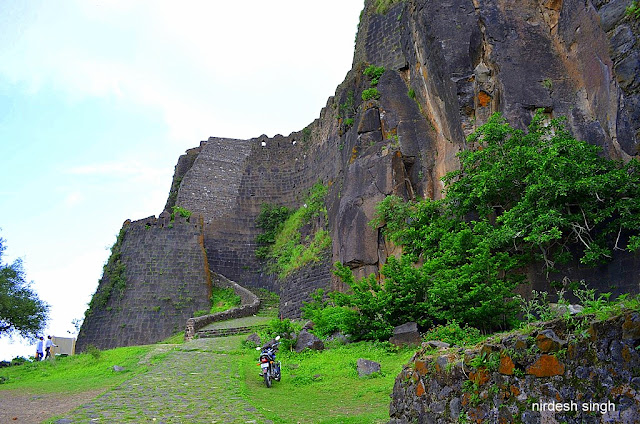 Twenty minutes later you are at the car parking. Just beyond a gateway opens up to spectacular vistas of Nimar below; Nimar being the south-western region of Madhya Pradesh that has been carved into modern districts now. A long series of narrow steps brings the visitors from the plains below to the first level of fortifications called Malaigarh and then here to the central level of fortifications called Kamargarh through a series of five gateways. This was the original entry path into the fort which was later augmented by a road built by the British and where you just had the tyre burst. It is time to climb a few vertical flights of steps to enter Asirgarh, the greatest fort of the sixteenth century. 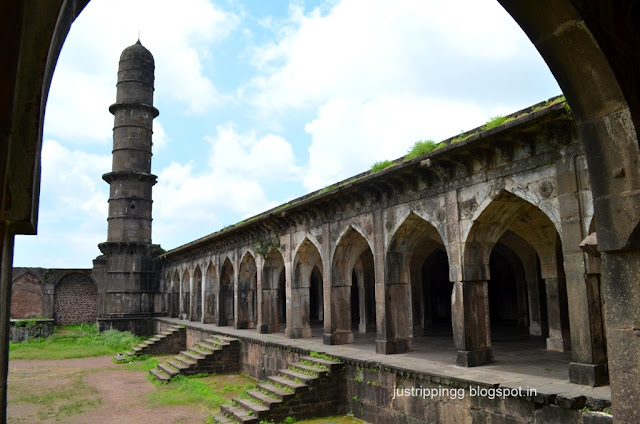 The Jami Masjid, built by the Faruqi King Raja Ali Khan, is a handsome structure with stone steps leading to its high three-arched entrance. Inside, the courtyard is flanked by cloistered halls or arched passages. The west facing qibla wall has thirteen decorated mihrabs with lattice screens, most of which have been lost. Flanking the western hall are two slender minarets that have kept you company as you approached Asirgarh on the highway. 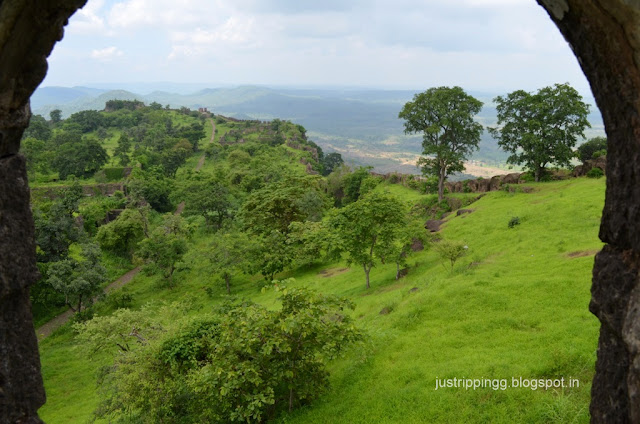 You sit here for some time enjoying the breeze and the vistas spread before you. As you look down at the ramparts on the southern side unfurling right below, you are taken aback. A huge snake is sunning itself on the wall. Sensing your movement the snake slithers into its hiding. This is the first time you are encountering a snake in a fort. But then you did have a feeling someone was watching you on your way up! Well the snake sighting means that you will have to be careful walking around the fort in the tall grass.

Leaving the mosque you make your way on the faint trails. The crisp sunny day with blue skies and wispy clouds is excellent for photography. All around here are the unmistakable ruins of colonial structures.  The fort along with the Faruqis, Mughals and Marathas has British connection too. British soldiers and their families stayed in these barracks and houses with chimneys. Such houses are common in the railway colonies of small towns across India. There is a cemetery too here with several tombstones of soldiers who probably died storming the fort as they tried to wrest it back from the Marathas.

Through the overhanging branches you come to the twin water tanks popularly known as Mama Bhanja Talaos. Getting to the edge of the tanks is treacherous and you try to stay away from the edges. It was these water tanks that supported a population of almost 40000 people that came out of the gates of the fort when the fort fell. You can see paths leading to underground structures that probably were used as granaries. 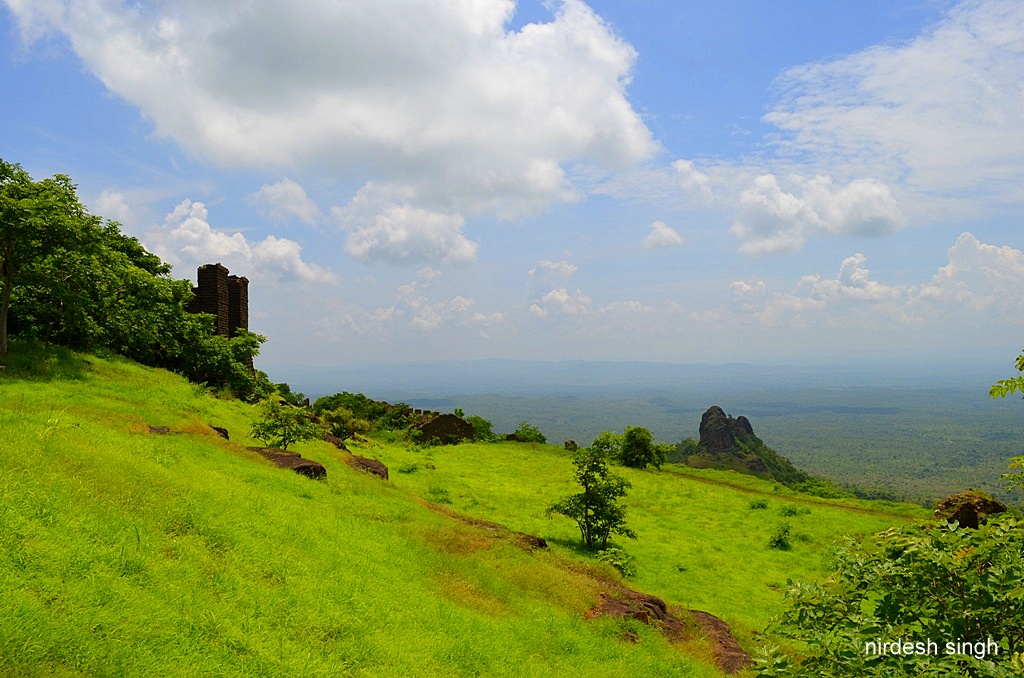 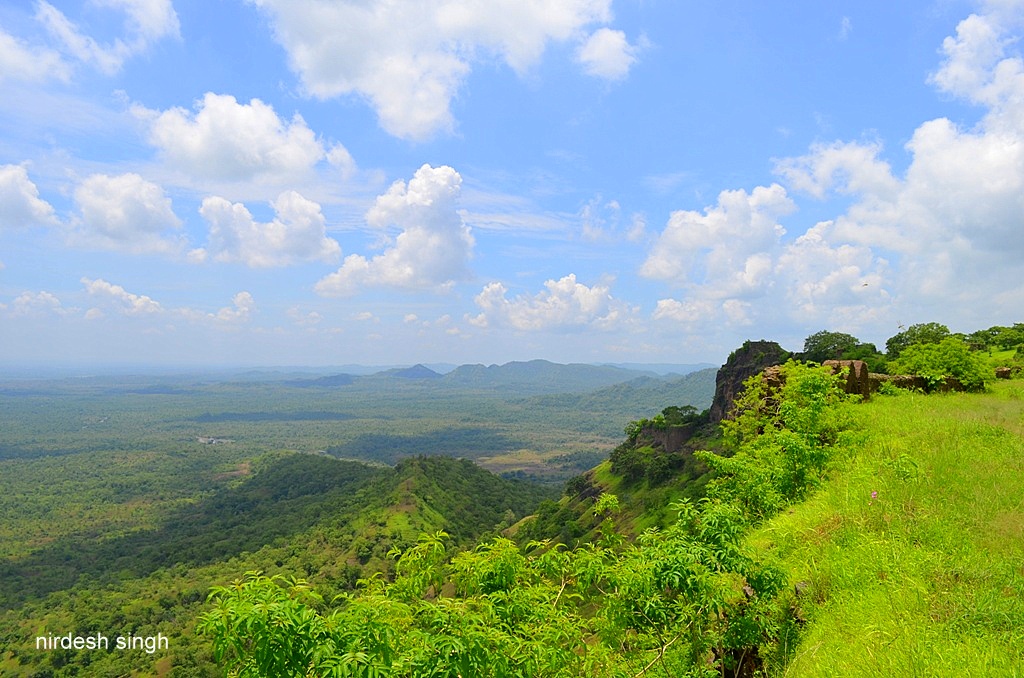 Since there are not many built structures here, you focus on the skies and on the ground. After the past few days of grey monsoon skies, the skies have turned cheerful blue even as the clouds create lace patterns on blue sheet. Inching my way to the edge of the escarpment, the views are dazzling – the hill and the rolling plains are awashed in brilliant green even as the lace embroidered skies seem to be in easy reach. The dirt track can be seen inching through the tree cover. All around on the ground studding the luminescent green grass are the purple balsam and pink zinnia flowers swaying in the breeze. Standing under the shade of a tree this is a brilliant day to be out here on a fort which has been witness to a long history of bravery, deception and yes, the fort has connection to mythology too.

Firishta, the Persian scholar, attributes the original construction of fort to Asa Ahir, a local chieftain.  Historians call this incorrect as the name Asir is mentioned by the Rajput poet Chand. The name Asir could have originated from the Asi or Haihaya kings who ruled over the Narmada river from Maheshwar. In 1295, Alauddin Khilji returning from one of his sacking tour of Deccan killed all the ruling Chauhan Rajputs of Asirgarh. The Faruqi Dynasty, an offshoot of the Bahmani Sultanate, ruled until the aging Akbar decided to show up on his last conquest outing. Later in 1803, the fort under Maratha occupation by captured by General Wellesley’s army in the Second Anglo-Maratha War.

There is one last thing to do. Walking through the ruins I run into two men who are frequent visitors here. They lead me to the Shiva Temple with connections to Mahabharata. The temple is supposed to be Mahabharata character Ashwathama’s temple. Ashwathama, according to popular folklore, who has been condemned to eternal roaming by Lord Krishna, comes to the temple every morning to pray to Lord Shiva or Mahakaal to relieve him from his misery. Fresh flowers are reportedly found inside the sanctum every morning. Taking off your shoes you descend into the step-well where the temple is built along the side. In the small sanctum, Nandi looks reverentially towards the ling. You have just stepped into the times of epics.

Asirgarh has been a revelation. You have a feeling you will be back here, perhaps in a different season to uncover more subterranean structures and connect with even more stories. And next time, you will take the steps from Kamargarh to get down through the fortifications. But now Burhanpur beckons where the love story of Shah Jahan and Mumtaz played out on the moonlit nights over Tapti.

Getting There:
Asirgarh in Madhya Pradesh is 160 kms from Indore and 30 kms from Burhanpur. Aurangabad in Maharashtra is 240 kms away.

What else to see:
Burhanpur to the south is a veritable treasure for heritage lovers. It was in Burhanpur that Mumtaz Mahal died giving birth to her fourteenth child in the Shahi Qila and was buried in Ahukhana just outside the city while her grand mausoleum was being built in Agra by a heart-broken Shahjahan. And in another little known episode, a much married middle aged Aurangzeb fell in love with a girl in Zainabad near Ahukhana.

Khandwa, 50 kms to the north, is the birthplace of the famous playback singer Kishore Kumar where a memorial has been built for him. 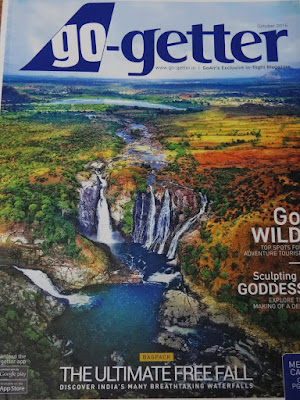 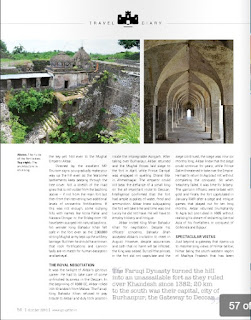 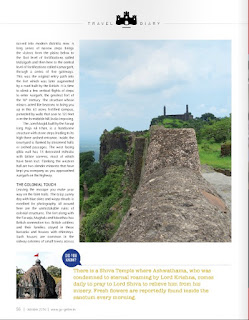 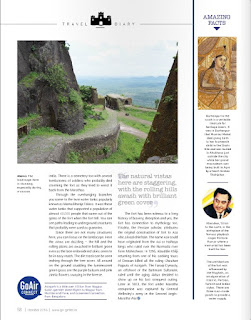