An exhilarating smile is playing on your face. Few minutes ago you have slid down on your back down a boulder with your feet luckily landing on flat rock. Before that there was some desperate clambering, ducking and walking on all fours to get to this cavity high above the pile of loose boulders. The reward was an incredible panel of prehistoric rock painting.

In Anegundi, where Harihar and Bukka founded the mighty Vijaynagar Empire, every day has been a surprise. But there is a bigger reward waiting beyond. Onake Kindi is a site of prehistoric settlement with rock shelters adorned with rock art. At Chikkarampur village, few kilometres ahead, you ask for directions. Two kids jump into the car. They will be your guides today. We drive off into this landscape of paddy fields with swaying coconut trees and these rounded boulders sprinkled around carelessly by some unseen hands.

Getting off the car, we walk across the field to come to this gate. The caretaker appears and leads us up a narrow track among the boulders. This time around, the entry is far easier than you experienced an hour ago. Our expedition team is in the middle of a clearing while boulders form a ring all around. Onake Kindi is a perfect setting for our ancestors - a narrow opening that can be easily guarded leading into this settlement with naturally formed shelters all around. This almost looks like a present suburban gated community with a central park and dwellings all around!

It is time to look at the paintings. Boulders balanced over each other have formed shelters. It is in these protective shelters the prehistoric human beings lived. In their spare time, like their contemporary brethren across the world, they indulged in some painting; just like they hunted, gathered food, danced and sang.

On the right is the first shelter. The rectangular panel of the wall apparently has a smoother finish and is densely packed with scores of figures. To you it seems like a community notice board or facebook wall where almost everyone has shared photos! In archaeological excavations, the layers of the mound or stratigraphy reveal different time periods and culture, it is possible that this rock face was probably painted over by generations of dwellers reflecting the time periods they lived here. Most figures belong to animals like ox, bull, deer, sheep, goats and even dogs. There are birds with long slender necks that look like peacocks. Some men chase after animals. A couple of framed images of perhaps a man and a woman together are seen – it almost looks like a wedding photo frame. The images can be interpreted in exciting ways.

In another shelter there are hunting scenes. One man is armed with a bow and arrow while another figure rides a horse brandishing a spear. Another panel has row of men in a seemingly military like formation as if marching together. 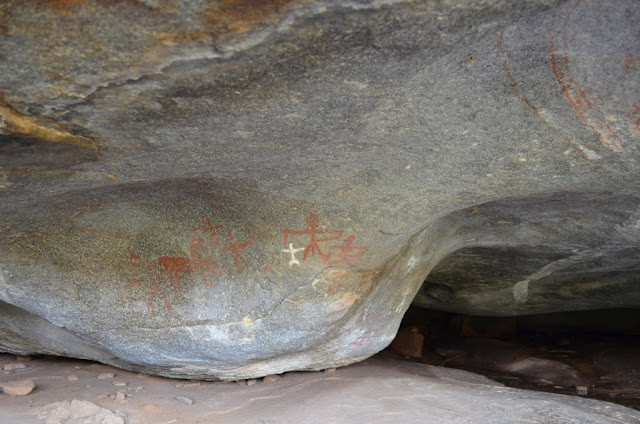 Looking at these canvases that have images of humans, birds and animals, it does seem that all prehistoric painters attended the same Arts College! It is incredible that across India and the world indeed, the symbols, humans and animals have a common form. You have seen similar figures at Bhimbetka, the World Heritage Site near Bhopal. Here in Onake Kindi too, the largely similar looking figures have been painted using red ochre pigment made by mixing hematite with water. There are some white figures too probably painted with limestone and could well be Karnataka’s earliest graffiti!

But then there are some surprising images too. There is a striking larger than life image of a huge cobra with its hood unfurled and ready to strike while another rock has a solitary image of a man with very long legs and thin arms. Another panel has mish-mash of geometrical figures. The biggest mystery is the abstract circular image over the painting board. The painting is a complex depiction of a burial along with sun and moon. There are tiny circles, wavy patterns and dashed lines probably conveying light and darkness. The interesting observation is that though much smaller in size and sprawl to Bhimbetka, Onake Kindi has figures that encompass all three categories defined by distinguished rock art scholar Dr. Yashodhar Mathpal – representation or natural, geometric and abstract.

Taking a round of the place you duck into one of the shelters formed by the overhang of a flat boulder balanced precariously over smaller rocks. You go back in time. It is evening and hunters come in with their game. In the open centre kids play and dogs bark. Men tie their horses as women fire up stoves to cook the wild boars. Cows and sheep are being tended to. Soon it is dark as men take positions to guard the colony. And then by the light of lamp, one of our earliest artists begins to paint on the wall. 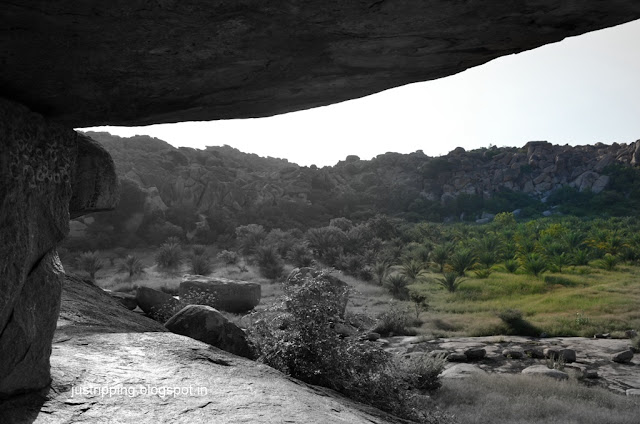 Magical Anegundi brings you to a different epoch at every turn. This right here is Iron Age. Just beyond, Anjanadri Hill rises above the mythological Kishkindha Kingdom where Lord Hanuman was born and across the sparkling Tungabhadra River are the sprawling ruins of evocative Vijaynagar. The inhabitants of the villages you passed through today are probably the descendents of the people of Onake Kindi. Anegundi which is as old as the rocks and is the mother to Hanuman, the prehistoric people and Harihar and Bukka will call you back soon.