Udupi – What’s on the Menu?

Konkan Railway offers a full course menu of exotic places that you can partake as the train makes its way through one of the most scenic routes our beautiful country has to offer. The finger-licking dishes keep coming as the train goes south from Madgaon to Mangalore. Karwar with its beaches and Naval Base is the hors-d’oeuvre. Gokarna with its beautiful laid back beaches is the undiscovered Goa and hope it stays that way. Honnavar, visited by Ibn Battuta, provides gateway to the mighty Jog Falls that are an hour away. Murudeshwar is the entree with the huge Shiv temple and Gopura that towers over the sea. Bhatkal with its beaches will whet your appetite.

The main course is Udupi.  The first time you encountered Udupi was the time when you lived in Mumbai and there were these vegetarian Udupi restaurants serving cheap, hygienic South Indian cuisine of idli and dosa on every street corner. The name Udupi sounded interesting and it would be fifteen years before you find yourself alighting from the train in the night to spend almost two days in a place full of surprises. It seems people of Udupi are quite enterprising. Apart from taking the Udupi style of restaurants across India, Udupi is an education centre. Manipal, few kms away, packed with colleges is pilgrimage for students from across the country. Manipal finally got its place under the sun when one of its students, Satya Nadella, became Microsoft's CEO.  Couple of days later as you take a bus from Udupi to Mangalore, it seems you are in a DTC bus. The bus is full of boisterous Delhi students who yearning for good old McDonalds burgers after weeks of Udupi food, are on a mission to raid the malls of Mangalore sixty kms away. Besides food and education, Udupi has another surprise waiting.

You are on your way to the fishing harbour by the Malpe Beach. The boats to St Mary’s Islands leave from Malpe fishing harbour. Due to the rains, the boat services are stopped for few months and would begin again in September. This is the only disappointment in Udupi. St Mary’s Islands, discovered and named by Vasco da Gama, is a group of four islands that have unique geological formation of columnar basaltic lava. St Mary Islands are one of the 26 Geological Monuments of India. Looks like the islands will have to wait.

But there is plenty going on in the Malpe fishing harbour. Fishing villages are one of the most interesting places to be. Before Udupi, you had chance to just watch the ongoings in the fishing village in Kakinada on the eastern coast in AP. Just like a beehive, there is intense activity going all around. The only difference is while Kakinada had smaller boats, Udupi here has trawlers. 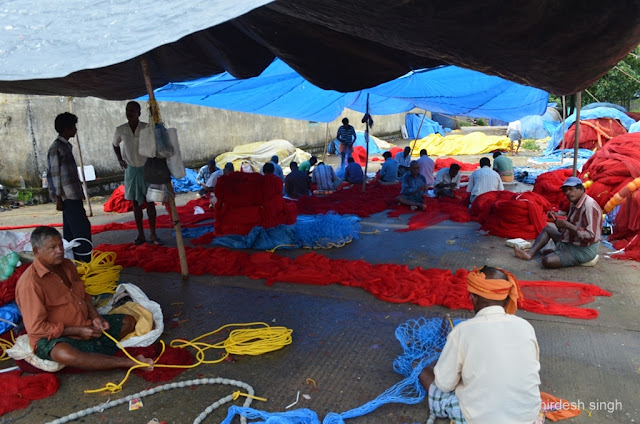 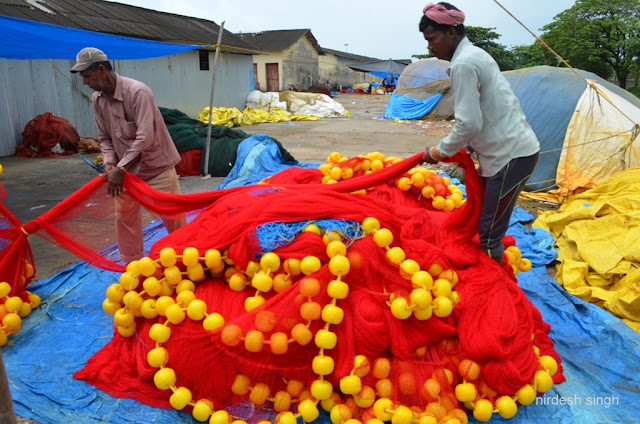 Everybody is busy - some shovel, some clean, some check supplies. There is constant buzz of voices and sounds.. It is the activities around the nets that are most intriguing. It seems there is some science around the way the nets are getting attention - after all it is the net that brings in the catch. Teams of specialized workers go about their business – some mend the nets, some are packing the nets in a certain way while another team loads the nets into waiting boats. You could walk around here all day and not tire of the spectacle. 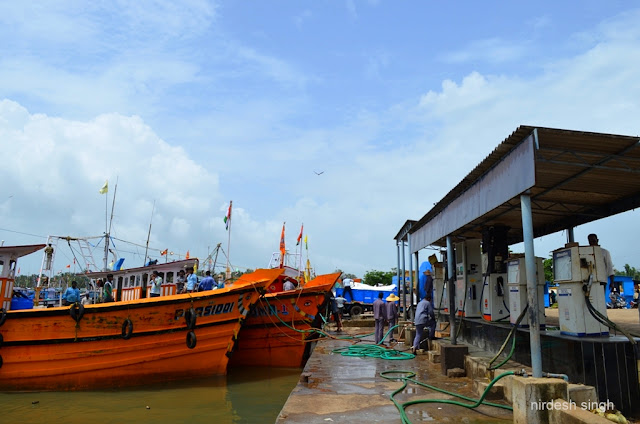 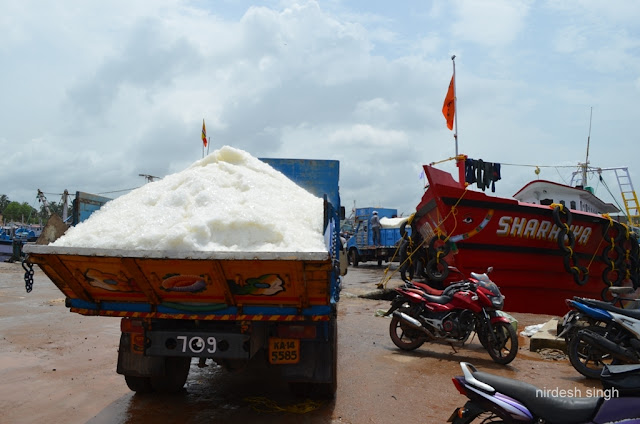 The harbour is witnessing a traffic jam on the waters. As on the roads, despite the traffic jam, all boats are in motion. Some are being leashed to the jetties even as they bob on the water; on other boats, engines sputter to life, as they begin to make their way out even as more boats come in. Some make their way to the petrol pumps. Trucks drive in, full of shredded ice that is dumped into the innards of the boat. The boats probably remain in the water for days and the ice keeps the catch from spoiling. 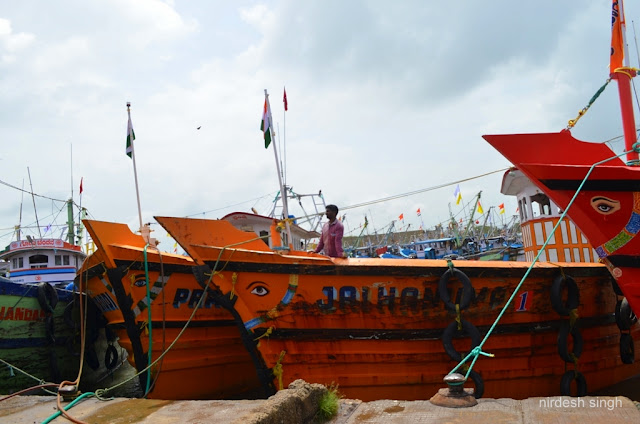 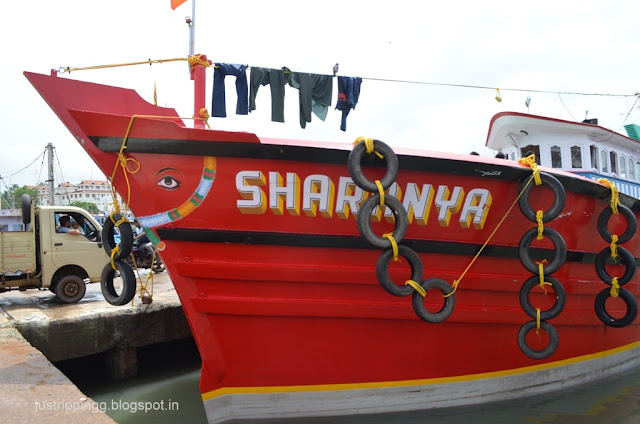 The harbour is a riot of colours. On the Indian roads it is the trucks that fill the roads with colour. Here the technicolour boats colour the harbour bohemian. The nets, the ropes, the crates, all are neon coloured. The harbour is like a living canvas that keeps changing its colours – colours are painted, the scene changes, the colours painted over and so it goes on.

It has been raining intermittently all morning. Sometimes the sun comes out and the air begins to swelter. Another bout of rain is on the way. So why not enjoy the rain on the beach?

Malpe Beach is a few yards away as you make your way beyond the harbour and a ship-building yard. As with most beaches close to fishing village, the beach needs cleaning up. Also, a temple here means everything is dumped on the sand. You are sure if you walk up a little north, the sands would become cleaner. But right now the dark clouds move in. People scamper away looking for shelter. You take out your umbrella. The umbrella is coming very handy these days. It has seen more action in few days in Konkan than its entire life. It is your last day with your umbrella. Few hours later you will forget it in the bus to Karkala! 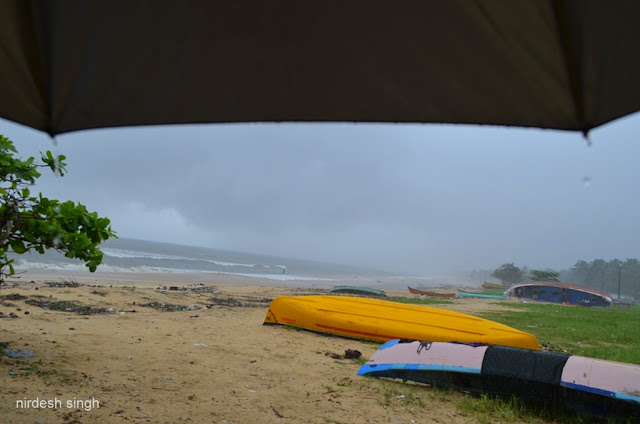 The rain comes out hard. Some people take refuge under the upturned boats on the beach. Beyond you, the Malpe Beach disappears. The entire horizon turns grey; sea, rain and sky, all have dissolved into each other.

The intense rain is threatening to pummel your umbrella down. You walk into the sanctuary offered by the Hanuman Temple. It is Independence Day. The kids have made some props for a function later during the day. The rain stops and the sun comes out. The land, the sea, the houses begin to take shape again. You walk back to the bus stop. 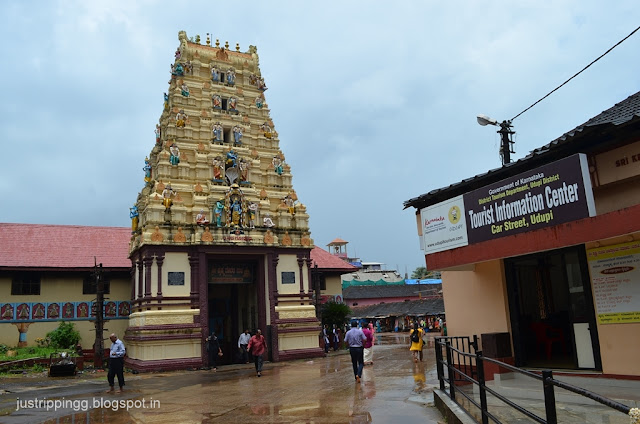 You make your way to the old part of the city to see Udupi’s famous Krishna Temple. You walk through the streets of the older city. The old city is surprisingly clean and open and not overrun by people and vehicles. There is a smattering of old buildings and residences even as newer buildings and shops with glitzy interiors make inroads. Udupi is called the Temple City and it gets the epithet from the Krishna Temple taking the place of pride in the centre of the city. 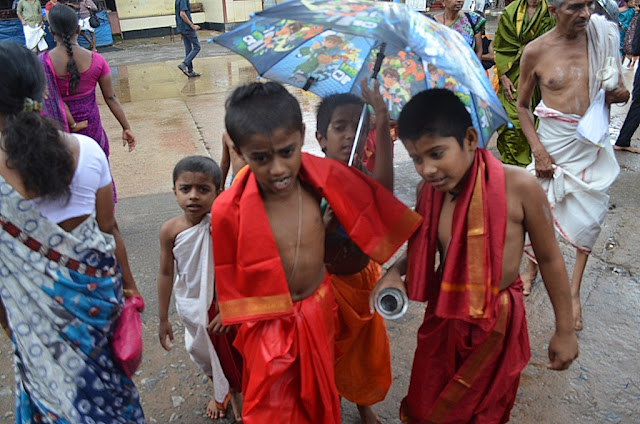 Sri Krishna Math was founded by Vaishnavite saint Madhvacharya in the 13th century. The Krishna idol is believed to have been made by Vishwakarma. Later Shri Madhvacharya handed the puja and administration to his eight disciples. Each of the disciples set their own temples around the Krishna Mutt. The complex came to be called Ashta Mathas. The complex is clean and airy with the different math buildings lined up around the main shrine.

Green tinged water of the Madhva Sarovar forms a beautiful setting for the temple and the complex. Rain starts once again. You wait in the walkway built around the sarovar. The rain comes down gently on the green waters. Devotees are dressed in their best. Lord Krishna smiles mischievously somewhere above.

The dark clouds, rain, green water of the sarovar add atmospherics to the entire setting. Ashta Math is a lovely place to be in the rains. 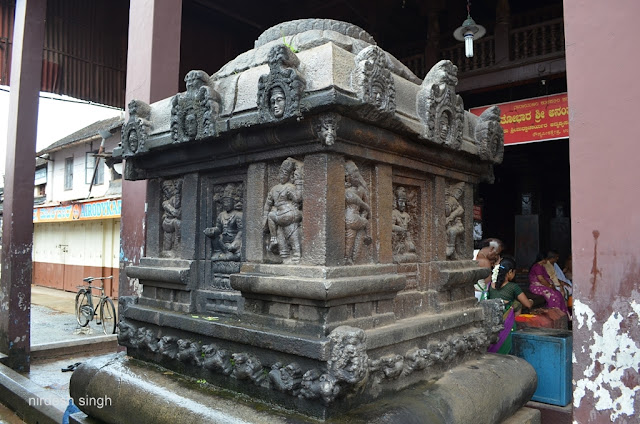 As you walk back from Krishna Temple to the bus stand, you come across a typical official looking building saying Corporation Bank. This is the Founders Branch Complex of Corporation Bank on Mosque Road. The signs announce that this is a Coin Museum or the Numismatics and Notaphily Museum, a part of the Corporation Bank Heritage Museum. A gate in the rear brings you to into a building with tiled roof that was the former residence of the bank’s founder.

Here is Udipi serving you another surprise. After its vegetarian cuisine that has spread across the country and its colleges that bring students from across the country to Manipal, Udupi is known for its banks and is called the cradle of banking in India. Five banks – Corporation Bank, Canara Bank, Syndicate Bank, Vijaya Bank and Karnataka Bank were founded in Udupi!

And the Coin Museum has a heart warming story like several you have seen across the country in your travels.

Khan Bahadur Khan Haji Abdullah Haji Kasim Saheb Bahadur, the founder of Corporation Bank established the bank to fulfil the long felt needs of banking of the people and to inculcate the habit of saving. It is said that Saheb Bahadur would donate his wealth – a little every day – to the poor. And when there was nothing left to give, he chose to take his life. The founder’s lofty ideals and ethos seem to echo as you step barefoot into the museum halls.

A gentleman, Mr MK Krishnayya appears and takes you around the exhibits explaining how money came into being as we walked through the interesting history of coins and currency. Mr Krishnayya, the curator of the museum, is a numismatics expert and a thematic philatelist. His interest is in collecting stamps that have flags on them. The museum too has some exhibits on flags and how the Tricolour evolved through the years. The museum has coins dating back from 400 BC to the current times. Listening to the nuances, and with different mints leaving clues on the coins will make you appreciate the coins and currency notes you carry in your wallet.


The exhibit rooms have an old world charm. The displays, the lighting, the feel, everything is amazing. All the exhibits are painstakingly researched, designed and displayed. Passion of the curator is to be seen to be believed. After the incredible Dharohar Crafts Museum in Kurukshetra University, the Udupi Coin Museum has put love back into museums especially when you skipped going to the museum in Goa after depressing experiences visiting several lifeless and dark government-run Archaeology museums across the country. 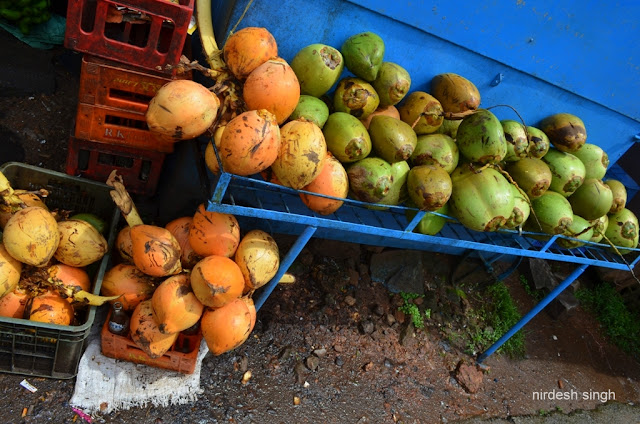 It is your first day in Udupi and you have already discovered so much about a city you knew nothing about few hours before.  There are more surprises as you work through the menu.

Getting There
Udupi is 60 kms north of Mangalore on the west coast of Karnataka. Best way to get to Udupi is by Konkan Railways either from Mangalore or Goa. Western Ghats are best enjoyed travelling from Goa to Udupi.


·         Photography is not allowed inside the Coin Museum